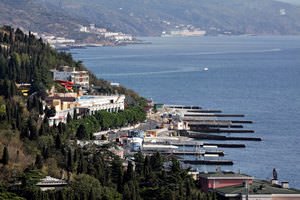 Alushta is one of the oldest and most beautiful cities of Crimea, located in a picturesque corner of the island, which at one time was visited by many famous personalities. Guests of Alushta have a worthy choice of sights and interesting cultural sites for studying. One of the most visited places is the "Museum of Marine Disasters", which is not in Alushta itself, but not far from it - in the village of "Malorechenskoye". It is a unique memorial complex dedicated to the memory of those who died at sea.
Advices to travellers: what you should know while being in Alushta
1. An alternative to local inns and hotels can be houses and apartments, which the locals willingly rent out to visitors. If you prefer a private apartment, do not agree to the first offer, …

Open
The museum itself is located in the "St. Nicholas church of Myra", which is also one of the important sights. The tower of the church performs the function of a lighthouse - the highest on the territory of Crimea. The design of the museum is interesting, and everything here is devoted to the marine theme. There is also a remarkable exhibition area, made in the form of the famous Flying Dutchman with a real captain's bridge and graceful sails.
In the very center of Alushta is located the "Church of All Saints" - the most remarkable architectural monument, built in the Gothic style. Its construction was conducted under the leadership of Count Vorontsov. Restoration of the temple was held in 1991, and now over its central entrance, towers a three-tiered bell tower, which looks very elegant in the background of "Mount Demiredzhi". "Alushta Museum of Local History" will be of interest to history lovers. The very building of the museum is also part of the history, since it was built in the beginning of the 19th century. The museum has many interesting archaeological finds, there are rare documents and photographs, but it is especially interesting to study objects of everyday life, their clothes and household items. Copyright www.orangesmile.com
Guide to Alushta sightseeing - things to see and to visit
One of the most ancient and charming cities of the Southern Coast of Crimea, Alushta strikes with its extraordinary beauty, compact size and amazing nature. Once, there was a very ordinary …

Open
The oldest building on the territory of the modern resort is the "fortress of Aluston"; to this day only fragments of a large fortification structure have been preserved. There are ruins right in the center of the city and they produce a somewhat strange impression, as they are surrounded on all sides by modern buildings and household buildings. Outside the city, right next to the mountain peak of Shagan-Kaya is one of the most amazing city attractions - "Gazebo of winds". The arbor was built in 1956 and consists of several columns and a dome, whose height is about 4 meters; on the floor you can see the mosaic pattern of the Wind Rose.

This guide to cultural sights Alushta is protected by the copyright law. You can re-publish this content with mandatory attribution: direct and active hyperlink to www.orangesmile.com.
Alushta - guide chapters 1 2 3 4 5 6
Reference information
Map of all palaces

Public palaces near Alushta
♥   Palace 'Massandra Palace' , 23.7 km from the center. On the map

Unique spots in Alushta and near

Distance from Alushta center - 49.7 km.
Many magnificent palaces and temples were built on this rocky plateau. The ruins have the main historical value today. The Orthodox principality of Theodoro was formed in 12-13 centuries. The thriving city was declared a capital of the principality. An active development of a religious and cultural sphere continued until 1475, when, after six months of continuous siege, the city finally surrendered to the Turkish conquerors. The once thriving and rapidly developing city was totally deserted in the 18th century. Since then the rocky plateau is peaceful and quiet. … Read further

Distance from Alushta center - 64.4 km.
After the death of the martyr Clement his relics were transferred to the church. A few years later, his followers founded a monastery that still operates today. About 10 monks constantly live there. The main treasure of the monastery are relics of the saint. During hundreds of years the monastery experienced many historical tragedies. It was captured and sacked by the Turks. It was completely reconstructed only when the territory was re-conquered by Russia. … Read further

Photogallery of cultural heritage of Alushta

Excursions over cultural sights of neighbours of Alushta

Hurzuf
A small picturesque resort is a place of a number of outstanding sights, therefore, holidaymakers have the opportunity to make a worthy excursion program. Since ancient times, Gurzuf has attracted creative personalities. Hundreds of years ago, literary figures and artists came here in search of inspiration. An important historical symbol of the resort is the house Richelieu - a ... Open »
Koktebel
Koktebel is a fairly compact city, so it does not have a lot of attractions. The magnificent bay in the embrace of the volcano Karadag, the mountains of Uzup-Syrt and the range of Kiik Atlama are the most important symbols of the resort city and priceless natural places of interest. Resting in Koktebel, it is necessary to visit the house of Maximilian Voloshin, in which he ... Open »
Yevpatoriya
Yevpatoria is a city of contrasts, which never ceases to amaze guests with its irresistible modern appearance and amazing historical atmosphere. It impresses with its elegant medieval architecture and modernity. Religious tolerance and morals inherent in locals never differ in a mild character. Those who are going to devote rest to the study of historical monuments in ... Open »
Kerch
Kerch museums are also quite interesting; their collections include many unique exhibits. Very interesting is the exposition from the Imperal Mound, excavations of the ancient Greet cities of Ilurat, Tiriaka and Nymphaeus, some excavations from Mount Mithridates and the crypt of the goddess Demeter with truly unique frescoes. In the Historical and Archeological Museum, there ... Open »
Anapa
The city is one of the oldest on the Black Sea coast, and therefore there are a lot of historical and architectural monuments, as well as museums, which will be interesting for fans of excursions to visit. The most important attraction is the "Saint Onufry temple", the oldest temple of the Kuban. A church was built in 1829 in honor of the victory over the Turks. It is ... Open »
Gelendzhik
Gelendzhik is the birthplace of the famous Russian writer Vladimir Galaktionovich Korolenko, one of the city museums tells about his life and work. It is located in an old house, where the Russian writer was born and spent most of his life. The most visited cultural center of Gelendzhik is the Historical and Local History Museum. Among its priceless exhibits there are many ... Open »

Culture guide to Alushta. Which fascinating sights to visit once you are in Alushta: temples, churches, museums, theaters and castles. Recommendations (with addresses, phone numbers and links) on the places 'must visit' in Alushta. Plan your own city excursion by using this page info!