Several months of comprehensive tours will not be enough to explore all the landmarks and sights of Moscow. Hundreds of museums and architectural landmarks and monuments, majestic squares and vast ancient parks, world renowned historical objects and modern exhibitions centers turn Moscow into a genuine paradise for excursion enthusiasts. The most popular and recognizable Russian capital landmark is still the Red Square.
Your active city break in Moscow. Attractions, recreation and entertainment - best places to spend your day and night here
Moscow features as many entertaining centers as landmarks and sights. Open air leisure and recreation enthusiasts will love local parks and gardens. The Tsaritsyno museum and reserve is of …

Open
It was established at the end of the 15th century and was initially called the Merchant Square as it was an established place for scale weekend fairs which attracted merchants from all over the country. The same significant symbol of the city is the Spasskaya Tower which was as well built at the end of the 15th century.
Initially the Tower was a part of fortifying constructions but at present the Tower is a part of the Moscow Kremlin. The Spasskaya Tower presents the Kremlin Chime and the clock. In close vicinity to the Red Square the tourists will discover the main religious landmark of the city being the Saint Basil’s Cathedral. Its opening was held in 1554. In course of its long history the Cathedral has been at the edge of total destruction for many times. The majestic building impressed Napoleon Bonaparte to such a great extent that he wished to transfer the Cathedral to France, however his dream was not fulfilled. Copyright www.orangesmile.com
Advices to travellers: what you should know while being in Moscow
1. Tourists are advised to determine a range of landmarks and sights for visiting just before the trip. Each tourist information center offers great many of excursions and tours being a real …

Open
At present the Saint Basil’s Cathedral is a globally renowned landmark. A part of the building is occupied with the State Historical Museum of Russia. The Moscow Kremlin is a location of the world renowned Diamond Treasury. An excursion to the treasury is still one of the most popular tours among travelers. Each day the Moscow Kremlin is visited by hundreds of the city guests wishing to enjoy stunning beauty of the coronation regalia and precious articles used by Russian tsars during solemn ceremonies. A unique collection of diamonds and gems, inimitable jewelry articles, imperial crowns and other precious pieces is considered to be the largest one in its kind. Among cultural establishments of the Moscow city the Tretyakov Gallery is the most remarkable one. The gallery is among the largest museums of the world. The same interesting and significant is the expositions of the Historical Museum. The Expo exhibition center regularly holds various exhibitions, presentations and other public events which always attract many visitors.

Plan your own excursion through Moscow: churches, museums and castles 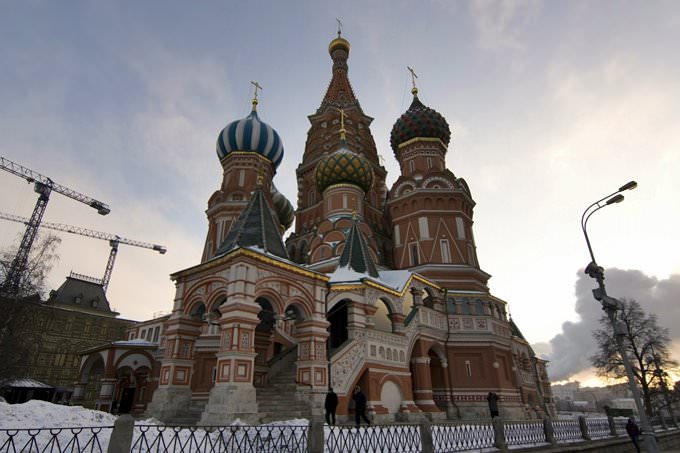 Facts:
» The St. Basil Cathedral is situated on the Red Square in Moscow. It’s widely known as the monument of Russian architecture.
» The St. Basil Cathedral is one of the most famous sights of Russia. For many it’s the symbol of Moscow.
» Currently the Cathedral is a branch of the State Historical Museum and is included in the List of World Heritage Sites in Russia.
» The Cathedral has been repeatedly restored. Asymmetric extension, tents over porches, intricate decorative domes (they were gold originally), decorative painting on the outside and inside were added in the 17th century.
» The modern bell tower was built on the site of the ancient belfry that has decayed and fallen into disrepair in the second half of the 12th century. In the 1680s it was replaced by the bell tower, which stands to this day.

Cathedral of Christ the Saviour, Moscow 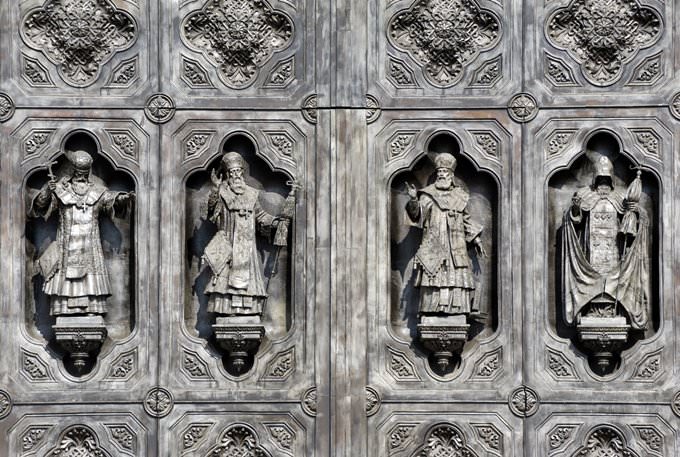 Facts:
» The Cathedral of Christ the Saviour is the Russian Orthodox Cathedral, not far from the Kremlin on the left bank of the Moscow River.
» Existing facilities are 1990s re-creation of the same name temple created in the 19th century.
» The original temple was erected in memory about Napoleon's invasion. Construction of the temple has lasted almost 44 years, but later the building was destroyed on December 5, 1931 in the midst of Stalin's reconstruction.
» Funerals of people significant for modern Russian history and culture were held in the Cathedral of Christ the Saviour.
» Great Orthodox relics and shrines such as a particle of the Robe of the Lord, the ark with holy relics, Reese of Blessed Virgin Mary, the relics of John the Baptist, the nail of the Holy Cross, and others are exhibited in the temple. 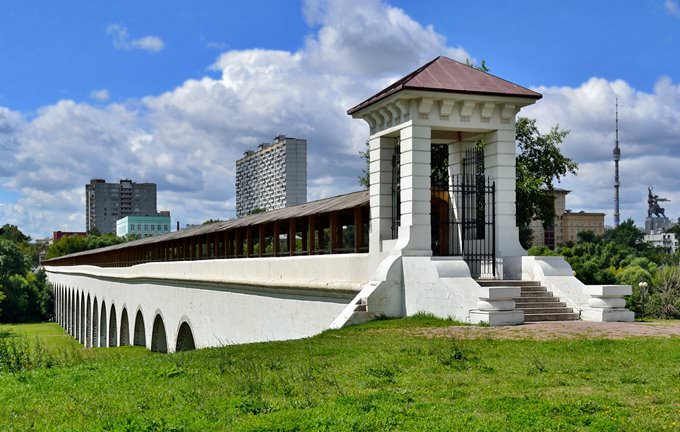 Facts:
» Ostankino is the TV and radio broadcasting tower.
» The tower is 540 m, thus it occupies 8th place in the world by height.
» The project was created by architect Nikitin overnight; the inverted lily became the prototype of the tower.
» Ostankino TV tower has two viewing platforms, indoor and outdoor, of 337 m and 340 m, respectively. The outdoor observation deck is open only in warmer months, from May to October.
» For 30 years the TV Tower observation deck and restaurant Seventh Heaven have being visited by over 10 million visitors. 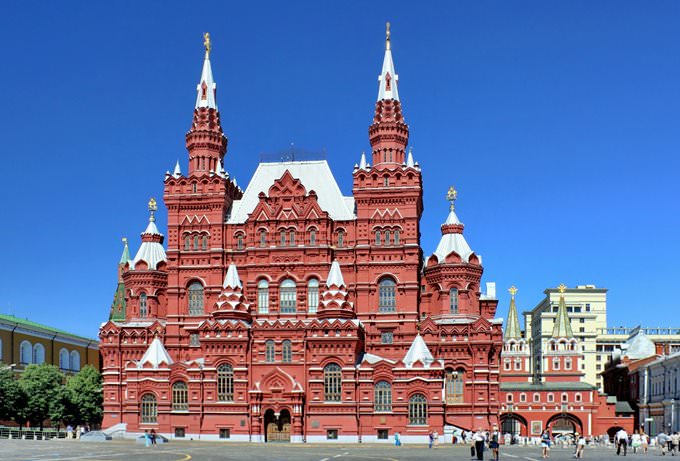 Facts:
» The State Historical Museum is located on the north side of Red Square in Moscow. The museum also occupies the neighboring buildings of the Mint and the Moscow City Duma.
» The collection reflects the history and culture of Russia from ancient times to the present day; it’s unique in the number and content of exhibits.
» Currently the museum is the largest in Russia. Two floors and 39 halls are dedicated to the history of Russia from ancient times to the beginning of the 20th century.
» Exposition starts on the second floor. It’s dedicated to the primitive society, Ancient Rus, the fight against foreign invaders, uniting Russia, culture, and development of Siberia.
» The third floor shows Russia since the era of Peter I: politics, culture, the economy of the Russian Empire.
» Massive reconstruction has happened to the museum. Throughout the rooms contain informational materials; the exhibition has a large number of screens and monitors except paper information support. 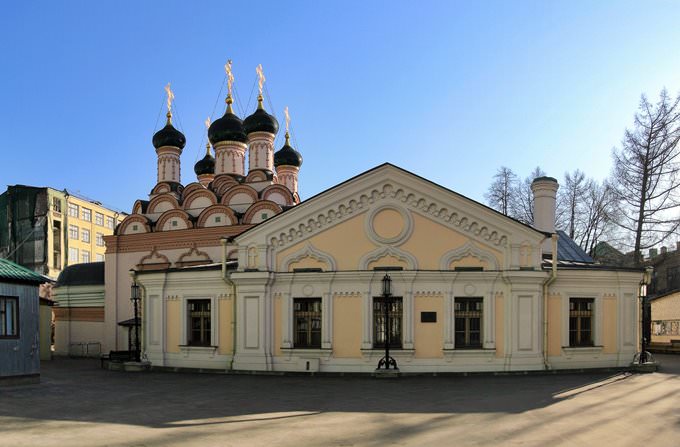 Facts:
» The Saint Sophia Church in the Middle Sadovniki is the Orthodox church on Baltchug Island opposite the Kremlin.
» The church is an architectural monument of federal significance.
» Wall paintings created at the turn of 19-20th centuries by artist Count Komarowski have preserved inside.
» The free-standing three-tier belfry was built in 1862 - 1868 by the architect Nikolay Kozlovsky. Its distinctive silhouette in the Russian-Byzantine style isn’t associated with the architecture of the temple itself, but corresponds to the verticals of the Kremlin towers located opposite.
» The church didn’t act in 1930s, as the premises were used for housing and laboratory.
» Currently, the temple is fully restored and elements of 17th century are reconstructed.

This guide to cultural sights Moscow is protected by the copyright law. You can re-publish this content with mandatory attribution: direct and active hyperlink to www.orangesmile.com.
Moscow - guide chapters 1 2 3 4 5 6 7 8

What to visit during two-day excursion in Moscow

The Armoury In The Kremlin
Where: The Kremlin, entrance from the Alexander Garden., Moscow; Telephone: +7 495 621 46 31;
The Red Square And The Lenin Mausoleum
Where: Krasnaya Ploshad’, Moscow;
St. Basil’s Cathedral
Where: Krasnaya Ploshad’ 2, Moscow;
The Tretiakov Gallery
Where: Lavrushkinskiy pereulok 10, Moscow; Telephone: +7 495 953 10 51; Metro: Tretyakovskaya, Novokuznetskaya;
Reference information
Map of all palaces

Public palaces near Moscow
♥   Palace 'Terem Palace' , 0.1 km from the center. On the map

Art galleries in Moscow and around
♥   Art museum 'Kremlin Armoury' Moscow, 0.3 km from the center. On the map

♥   Art museum 'State Historical Museum' Moscow, 0.4 km from the center. On the map

♥   Art museum 'State Tretyakov Gallery' Moscow, 1.2 km from the center. On the map

♥   Art museum 'Moscow House of Photography' Moscow, 1.6 km from the center. On the map Photogallery of cultural heritage of Moscow

Excursions over cultural sights of neighbours of Moscow

Kaluga
In Kaluga, there are a lot of attractions, whose age is more than two hundred years. A significant part of the excursion program is made up of ancient religious buildings; one of the oldest is the "Church of Intercession on the Moat", which was built in 1687. At the beginning of the 18th century, the construction of the "Church of the Signs" took place, as well as the beautiful ... Open »
Vladimir
Many of the largest historical monuments of Ancient Russia are concentrated in Vladimir. The city literally enchants with its beauty. For many hundreds of years the main symbol of Vladimir remains the Golden Gate, which initially served as a front entrance to the city. In ancient times, the gates were opened exclusively for noble guests, as well as for the royal retinues who ... Open »
Bryansk
Monuments of art and culture are the main property of the city and its inhabitants. In Bryansk, there are more than 500 monuments of archeology, history, urban planning, art, architecture, as well as objects of scientific, historical, artistic and cultural value. On the territory of the city there are palaces and houses of culture, ancient buildings and museums, as well as ... Open »
Vologda
One of the most visited places in Vologda is Kremlin - the most important historical monument and the permanent symbol of the city. The structure of the Vologda Kremlin complex includes the former Bishop's house with powerful fortification walls, the beautiful Resurrection Cathedral, and the St. Sophia Bell tower. All these buildings were erected in the 17th-19th centuries. ... Open »
Vitebsk
The historical and cultural heritage of the city is incredibly diverse and numerous. The most important historical symbol of Vitebsk is the Local Lore Museum, located in the building of the Town Hall. It stores key exhibits, telling about the history of ancient Vitebsk. After visiting priceless exhibits, visitors to the museum have a unique opportunity to visit the tower of the ... Open »

Culture guide to Moscow. Which fascinating sights to visit once you are in Moscow: temples, churches, museums, theaters and castles. Recommendations (with addresses, phone numbers and links) on the places 'must visit' in Moscow. Plan your own city excursion by using this page info!