Sightseeing in Tartu - what to see. Complete travel guide 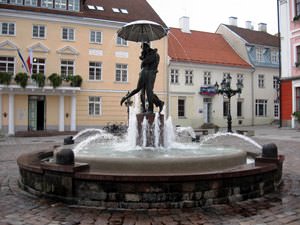 This city has the right to be considered the cultural center of Estonia. Here are opened numerous museums and exhibitions devoted to art. The number of historical sites is simply tremendous.

The local university has become the symbol of the city. It was established in 132 by the order of Gustavus Adolphus. Among the old buildings that are worth attention we should also highlight Cathedral of Peter and Paul. Its construction started in the 12th century and lasted for more than 200 years. One should also visit the local Town Hall, the Observatory, St John's Church and the Powder Cellar. These are great examples of medieval architecture and so they are full of interesting stories. It is also worth noting that the cellar was turned into an excellent restaurant that serves best dishes of national cuisine. The atmosphere and design here are more like in an old tavern than in a modern dining facility.
Excursion over cultural sights of Tartu - 'must visit' points of interest
Tartu is the fabulously beautiful miniature city, which is famous for an abundance of interesting museums and interesting historical sights. The most interesting for tourists is the area of …

Open
Those visitors, who adore entertaining excursions, will also find much interesting in the city. Among the museums opened are the Museum of Tartu University, Geology Museum, Estonian Sports Museum, Museum of Zoology, Museum of Art, Art Museum, the Ethnographic Museum, Museum of O. Luts, and Museum of the History of the City. Each of them presents to visitors magnificent collections of historical artifacts and art objects. The large selection of items allows everyone to find a hall to fit own taste.
Nature lovers will surely find wonderful entertainments here. The city has several large parks. The park located in the valley of the Emaj Gi River is considered the most picturesque one. While walking through the streets of the city, you will see numerous old mansions and palaces, each of which is a unique historical object. Palace of Palms, Sagadi Palace, Vihula manor and Alatskivi Castle are particularly worth making a visit. Lahemaa National Park is also a wonderful place where you will be able to see several interesting buildings. Copyright www.orangesmile.com
Your active city break in Tartu. Attractions, recreation and entertainment - best places to spend your day and night here
Year-round a huge selection of entertainment options is available to visitors of Tartu. The Aurakeskus water park has remained one of the most popular entertainment options for many years. …

Open
Modern AHHAA scientific center occupies an unusual building in a futuristic fashion. Its opening took place in 1997. Today, it is the largest research center within the territory of Baltic States. Exciting tours and activities are available to its visitors. They can visit the scientific theater and listen to lectures on different topics, see the exhibition halls and the planetarium. Special activities are carried out here for children. There is also a cinema that shows informative documentaries. 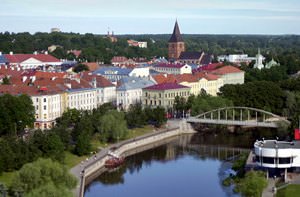 The Old Anatomicum in Tartu used to be the most important scientific center, where they conducted really exciting studies in the field of medicine. It is interesting primarily from an architectural point of view to contemporary tourists. The research center occupied a beautiful 19th-century mansion surrounded by a large beautiful garden. It's a lovely place to visit at any time of the year.
Advices to travellers: what you should know while being in Tartu
1.It is very convenient to travel around the city by public transport; local buses are painted bright red. Tickets for travel have to be bought in advance at kiosks close to stops and the …

Open
The Leaning House is the most unusual architectural sight of Tortu. This beautiful house was erected in the late 18th century for the noble Barclay de Tolly family. Construction inefficiencies have led to its inclination. Only talented rebuilding saved the mansion from complete destruction. Nowadays, a popular bookstore occupies its first floor. 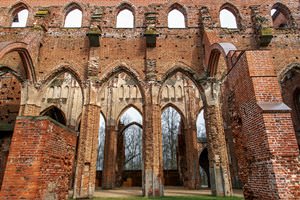 An excellent beer museum operates in Tartu. It's called A Le Coq. The museum was named after the historic brewery opened in 1803. It became the very first brewery in Estonia. The plant is in operation. They opened a thematic museum in one of its historic buildings in 2003. Among the exhibits are old-fashioned equipment, antique dishes, a collection of beer mugs and advertising posters, numerous awards that the plant gained in international competitions.
Cuisine of Tartu for gourmet with top restaurants and cafe
One of the main gastronomy features of Tartu is local beer. Vacationers can try the best varieties of beer in one of the many pubs, restaurants and bars. A typical Estonian pub is …

Open
Tartu carefully maintains its historical traditions. During the 15th century, St. Anthony's handicraft Compound was opened in the city. It has been operational for more than 500 years. Visitors can see original craftsmen to make chic porcelain and glass products, sew shoes and leather accessories, and make traditional pottery. They often carry out interesting themed events and fairs.

This guide to iconic landmarks and sights of Tartu is protected by the copyright law. You can re-publish this content with mandatory attribution: direct and active hyperlink to www.orangesmile.com.
Tartu - guide chapters 1 2 3 4 5

City tours, excursions and tickets in Tartu and surroundings

Survived castles around Tartu
♥   Castle 'Tartu Castle' , 35 km from the center. On the map

National and city parks around Tartu
♥   National park 'Karula rahvuspark' , 73.1 km from the center. On the map

Art galleries in Tartu and around
♥   Art museum 'Tartu Art Museum' Tartu, 1.8 km from the center. On the map

♥   Art museum 'University of Tartu Art Museum' Tartu, 1.9 km from the center. On the map 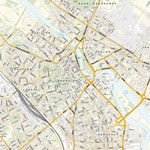 Search touristic sites on the map of Tartu

Sightseeing in regions nearby Tartu

Pskov
Kievan duke Igor met his future wife, Olga, exactly in the surroundings of Pskov. She made a significant contribution to the history of Rus. The Duchess loved Pskov and it turned into a well-fortified city. One of the first Christian cathedrals, the Trinity one, was built on the territory of the city. The historical development of Pskov is unique because its lands had long ... Open »
Rakvere
In Rakvere, tourists are welcome to visit the Church of the Trinity. This is a medieval church that was restored and rebuilt in the 17th century. An ancient altar is one of the most famous attractions of the shrine. The altar has an unusual design that makes it unique. It is made of wood. Not far from the altar, visitors will see a tombstone of Arnold Annebat’s grave. This ... Open »
Parnu
Town hall built in 1797 is the most famous architectural monument of Parnu. This is a true example of classicism. In this Town hall often take place festivals and concerts, and anyone can attend them. The oldest building of the city is Red Tower. It was built in the 15th century. This is just a small part of fortifications that have survived till our days. The construction of ... Open »
Narva
The City Museum is one of the major cultural facilities of the city. Here each visitor can not only see the priceless exhibits, but also try hand craft instruments that were used in the 17th century on their own. With the help of these instruments each visitor of the museum creates a memorable souvenir that will remind of this unusual excursion. Among the architectural places ... Open »
Cesis
The simplest and cheapest way to get to the Latvian town of Cesis is to take a train to it. The majority of trains depart from Riga. Trains to Cesis go three times a day to deliver locals and tourists to this charming town. If you prefer buses, then simply go to the bus station in Riga. The ride will last one and a half hours in this case. As a rule, buses to Cesis depart ... Open »
Tallinn
Old Tallinn. Winding cobblestone streets of Old Tallinn are very popular with tourists. The historical center of the city , which is surrounded by the city wall, is divided into two parts – Toompea , located on Toompea Hill, the former residence of aristocracy, and the Lower Town. The center of Tallinn, which was mostly built in the XI century, has survived till our days ... Open »

All about Tartu, Estonia - sightseeings, attractions, touristic spots, architecture, history, culture and cuisine. Prepare your trip together with OrangeSmile.com - find out the 'must see' things in Tartu, which places to visit, which excursions to take, where the breathtaking views are waiting for you. Planning your trip with this travel guide will help your to get the most out of Tartu in few days.