Sightseeing in Cesis - what to see. Complete travel guide 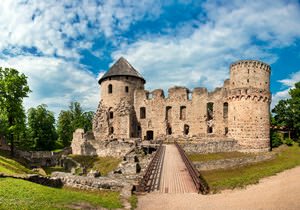 Cesis is an interesting town in Latvia. This is a place where history meets modern times. Cesis is also one of the oldest settlements in the country. The town is situated in a spectacular place – in the northern part of the Central Vidzeme Upland. Beautiful forests and enchanting sceneries surround this lovely town. The Gauja River crosses Cesis, making the area even more attractive. This town still has that inimitable medieval magic that is hard to find in more popular tourist destinations nowadays. Do you want to have a relaxing and peaceful vacation? In this case, calm Cesis rich in architectural landmarks is exactly what you need.
The history of the town started more than eight centuries ago. First mentions of this settlement date back to 1206. This is when Venden Castle was built in the area. The castle gave the town its first name. Initially, the castle was made from durable wood. A local tribe known as the Vends was the first dweller in the building. Modern Latvians originate from this tribe. The castle was rebuilt later, and wood was replaced with stones. At that time, this was the most protected fortress in the Baltic region.
Cesis reached the peak of development when it was the capital of Livonia. Besides that, the town played an important role in the development of Vidzeme. Cesis became a town at the beginning of the 14th century. It joined the Confederation of Cologne at the end of the same century. According to some historical data, the modern flag of Latvia was created in Cesis. By the end of the 19th century, Cesis was already an important center of art, culture, and recreation. The town hasn’t lost its position in modern days. Copyright www.orangesmile.com
Do you respect and value art? In this case, you will find it very interesting to visit the art festival that takes place in the town every summer. This is a popular international event dedicated to different forms of art. Best modern paintings, academic music, films, theater plays, and opera – the festival offers all these and even more. Choreographers from all over the world come here to show their latest creations. The atmosphere of holiday and celebration lasts a whole month in Cesis. The number of participants grows every year, just like the number of visitors who come to see different forms of art. 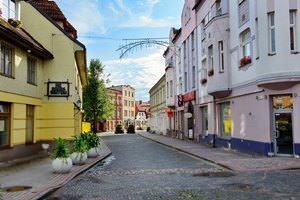 Cesis Castle, which was mentioned above, is the main landmark in the town. This is an important landmark on the country level. The castle has partially survived until our days, but local people care deeply about the castle because this is an important fortification that once was home to the Livonian Order. The castle changed its owner in the second part of the 18th century as the von Sievers family bought it. The von Sievers made changes to the outer and inner design of the building.
A beautiful and well-kept park appeared around the castle. Soon, the first brewery appeared in the area. However, the next generation of the family didn’t care much about the building, and Cesis Castle soon became deserted and forgotten. Restoration works started in the castle only in 1949. The castle became a historic museum that started frequently hosting different events. A visit to this castle is like time traveling back to the medieval period when noble knights lived here. 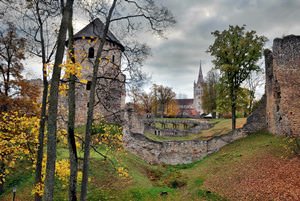 Despite modern infrastructure and constant development, Cesis hasn’t lost its original atmosphere. Numerous medieval streets bring tourists back to the past. When taking a stroll on them, pay your attention to one interesting building on Rigas Street 47.
At a glance, this is an ordinary house in pale pink. A simple dwelling that looks just the same with the nearby buildings. However, the house has its own name – the Princesses house. The fairytale name of the building has nothing in common with actual princesses. The widow of Karl Eberhard von Sievers Martha Juliana and her unmarried daughters, Katarina and Vilhelmine Charlotte Elizabeth, spent the rest of their lives in this house. Supposedly, the mother called her daughters “princesses”, giving the name to the building. 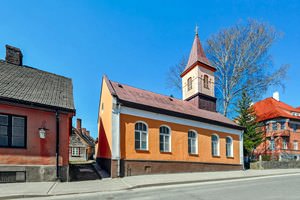 There is one more important attraction in Cesis. This is the Āraiši lake dwelling site. The open-air museum on the shore of Lake Araisi gives an outlook on the earliest history of the region. The site features the remains of a fortified settlement that dates back to the 9th century. The museum was established at the end of the 19th century. However, archaeological excavations on the site continued after the opening of the museum. The settlement consists of large wooden houses and a broad street between them. The lake protected the settlement from alien invaders, so many residents of this settlement became rich.
The simplest and cheapest way to get to the Latvian town of Cesis is to take a train to it. The majority of trains depart from Riga. Trains to Cesis go three times a day to deliver locals and tourists to this charming town. If you prefer buses, then simply go to the bus station in Riga. The ride will last one and a half hours in this case. As a rule, buses to Cesis depart every hour.
This guide to iconic landmarks and sights of Cesis is protected by the copyright law. You can re-publish this content with mandatory attribution: direct and active hyperlink to www.orangesmile.com.

City tours, excursions and tickets in Cesis and surroundings

Survived castles around Cesis
♥   Castle 'Helme Castle' , 79.7 km from the center. On the map

National and city parks around Cesis
♥   Nature Park 'Ogres ieleja' , 48.9 km from the center. On the map

Search touristic sites on the map of Cesis

Sightseeing in regions nearby Cesis

Riga
Tourists, who are familiar with the history of Riga, will surely understand the meaning of the expression "Riga is the city that must be freed all the time". This shopping center, founded by German merchants, had to survive in different conditions and endured sharp changes in its development. Independence in 1918, arrival of the Red Army in 1940, the second independence in ... Open »
Jurmala
Jurmala is the largest and the most popular resort in Latvia. Ideal infrastructure and rich cultural life are among the advantages of this city. However, beaches of fantastic beauty with crisp white quartz sand remain the main attraction point for numerous tourists. Every year, tenths of thousands of travelers arrive in Jurmala to relax and have fun. Currently, the city is ... Open »
Bauska
Bauska has prepared many interesting attractions for its guests. This is a charming town situated approximately 70 kilometers from Riga and not far from the border with Lithuania. The peaceful settlement never ceases to attract tourists with its exceptional natural beauty. Bauska is also famous for its interesting history that is intertwined with important personalities from ... Open »
Parnu
This is an ancient and picturesque city with rich history, as well as a famous resort with well-developed infrastructure. In addition to comfortable hotels and inns you will find here numerous resorts and holiday homes, so your vacation will be not only exciting, but also beneficial for health. Parnu is full of interesting sights to visit every tourist should have. Town hall ... Open »
Tartu
This city has the right to be considered the cultural center of Estonia. Here are opened numerous museums and exhibitions devoted to art. The number of historical sites is simply tremendous. The local university has become the symbol of the city. It was established in 132 by the order of Gustavus Adolphus. Among the old buildings that are worth attention we should also ... Open »
Daugavpils
On the bank of the biggest river in Latvia, the Daugava River, tourists will find the second-largest city in the country – Daugavpils. Upon arrival in this settlement, many travelers notice that it still has architectural landmarks and buildings that unleash the heroic military past of the region. On top of that, Daugavpils is a large city with well-developed infrastructure ... Open »

All about Cesis, Latvia - sightseeings, attractions, touristic spots, architecture, history, culture and cuisine. Prepare your trip together with OrangeSmile.com - find out the 'must see' things in Cesis, which places to visit, which excursions to take, where the breathtaking views are waiting for you. Planning your trip with this travel guide will help your to get the most out of Cesis in few days.