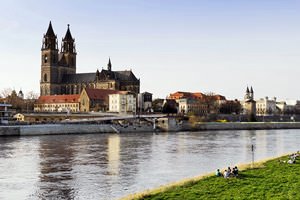 Magdeburg is famous for its amazing historical traditions and holidays. Here, interesting symbols of national culture can be seen at every step. One of the most famous natives of the city is the philosopher and engineer Otto von Guericke who invented a vacuum pump in the middle of the 17th century. Many symbolic monuments are dedicated to the great inventor. Hemispheres are considered the most original and remarkable ones. Today, colorfully painted steel hemispheres can be seen on many streets, and few tourists know about their true symbolic meaning.
Top touristic routes around Magdeburg: architectural sightseeing and landmarks
Discovering the architecture of Magdeburg from bird's eye view! Cathedral of Magdeburg, St.-Johannis-Kirche, Hyparschale, Sternbrucke, all those monuments are defining the image of Magdeburg …

Open
In 1654, the inventor conducted an interesting experiment - he made two copper hemispheres, connected them to each other, and removed the air from the ball. Trying to separate the hemispheres, they used the power of sixteen horses, but they failed to violate the integrity of the structure. Such an unusual experiment proved the existence and power of atmospheric pressure. Local residents have preserved the memory of the original experiment to this day.
Exploring the monuments installed in the city often becomes an exciting adventure for tourists. Many of the monuments are artistically decorated with paintings that depict historic sights of the city, and the most original is a monument with a clock. It is a huge stone sphere with numerous dials that display time in different parts of the world. Throughout the year, many interesting holidays are held in Magdeburg. The beginning of autumn is marked by the Kaiser Otton Fest. Copyright www.orangesmile.com
Cultural vacation in Magdeburg - fantastic architecture and monuments
Kloster Unser Lieben Frauen, Altes Rathaus, Bordelandhalle, as well as many others, they all become the world's cultural heritage objects and remain as iconic monuments for Magdeburg …

Open
This is one of the youngest holidays that was first held in 2010. The festival is dedicated to historical traditions of the city. Its opening begins with a solemn costumed parade passing through historic streets. The most significant entertainment events take place in the historical district. Special venues for the celebration are set up near the bastion, the old fortress, and the Cathedral. Festival participants can witness knightly tournaments, watch beautiful dance performances, and attend music concerts. 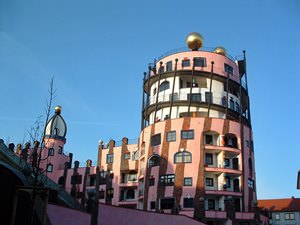 Street performers and jugglers entertain crowds on the streets for several days. A significant part of the festival program is focused on children. Some of the most interesting are performances organized by the local puppet theater. During the festival days, Magdeburg opens a medieval market where visitors can buy beautiful historical costumes in the national style, interesting handicrafts and souvenirs. Visitors to fairs are offered to try traditional regional dishes and delicacies that were popular with locals hundreds of years ago. The Kaiser Fest is a great opportunity to immerse oneself in a unique medieval atmosphere for several days and get acquainted with the popular traditions of local people.
Guide to Magdeburg sightseeing - things to see and to visit
Magdeburg is an ancient city and the capital of the Saxony-Anhalt federal district. This place is situated on the bank of the river Elbe. During the times of Emperor Otto I the Benedictine …

Open
Fans of event tourism will be interested in visiting the city on the eve of the Christmas celebration when Magdeburg changes beyond recognition. The streets are decorated with artistic illumination, thematic installations and special trade zones for fairs are installed throighout the city. Christmas holidays will be a great opportunity to get acquainted with the gastronomic traditions of the region. At the fairs, they sell popular local sausages, sweet pastries and drinks. The first Christmas market was held in Magdeburg back in the Middle Ages. At that time, it was a great opportunity for townspeople to stock up on their favorite products for the winter. 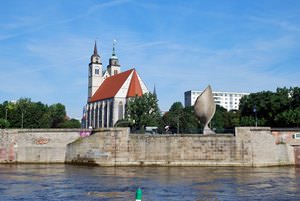 The fair took place on Cathedral Square, but now it is held on Alter Markt, in front of the Town Hall. The fair opens on December 1 and runs until the end of the month, offering a lot of interesting entertainments. Ice slides equipped on the square at this time are very popular among children. The largest ice rink in the city is also available in the same place. Colorful stalls present the best products from all the surrounding regions. Here they sell exquisite meat delicacies, dairy products, fresh pastries, and other Christmas treats.
Family holidays with kids in Magdeburg. How to entertain your child, things to show to children.
The most popular children’s landmark in Magdeburg is Zoologischer Garten. This zoo is well-known for its beautiful decoration. It has plenty of greenery and equipped places for …

Open
A mandatory attribute of the fair is mulled wine stalls. Each one offers the popular drink prepared according to a special recipe. One of the main gastronomic symbols of Christmas in Magdeburg is Grünkohl, which is prepared from a special type of green cabbage grown on nearby farms. The cabbage is stewed with various sausages or smoked loin. The recipe for this dish was invented in one of Magdeburg’s butcher shops back in 1924. On Christmas Eve, you'll have a chance to try Grünkohl not only at the fair but also in local restaurants.

This guide to traditions and festivals in Magdeburg is protected by the copyright law. You can re-publish this content with mandatory attribution: direct and active hyperlink to www.orangesmile.com.
Magdeburg - guide chapters 1 2 3 4 5 6 7 8 9 10 11

Cathedrals and basilicas near Magdeburg
♥   Kathedrale Sankt Sebastian, Magdeburg, 0.8 km from the center. On the map

♥   Kaiserdom SS. Mauritius und Katharina, Magdeburg, 0.9 km from the center. On the map

♥   Stiftskirche St. Servatius, Quedlinburg, 51.6 km from the center. On the map 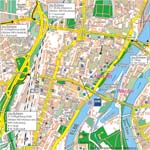 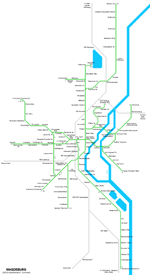 Colors of Magdeburg in photos

Traditions and festivals in cities around Magdeburg

Dessau
Bauhaus Festival taking place in late August is one of the most significant events in the festival life of the city. Its motto sounds like "have fun like Bauhaus students!". And, as you know, students know how to have fun like nobody else - this means that it wouldn't be easy to find a more cheerful festival at least in Dessau. As one might guess from the name, it is held in ... Open »
Wolfsburg
Another striking distinction of Wolfsburg is the abundance of rabbits in local parks. In the evenings, they can be seen literally at every turn. Animals are accustomed to people and are absolutely not afraid of passers-by. They live literally everywhere: rabbit holes can be found under every bush. According to one of the versions, rabbits are attracted by an abundance of ... Open »
Halle an der Saale
Since Halle is Georg Handel's hometown, it is not surprising that Handel Festival in honor of the famous native is held here. Its locations are many institutions throughout the city (theaters, opera houses, concert halls). You can listen to classical works of talented composers, not only Handel. Nevertheless, the major focus is on the work of the great composer who was lucky ... Open »
Braunschweig
After Schoduvel, it's time for Rosenmontag or Rose Monday marking the beginning of Lent. This is the time when carnival fun ends and strict restrictions begin. A festive mood is everywhere - even though there is no any official day off, few people complain about a long working day - even hard-working Germans need some rest. Therefore, it should be taken into account that ... Open »
Potsdam
After visiting of palaces tourists can walk along big park and look at the secular trees. People who like to walk on foot will like the Babelsberg Park, on its territory there are two age-old palaces. Flatowturm tower is original object, whose height is 46 meters. On its top there is good observation desk, where unbelievable view is available for guests. Near the park it is ... Open »
Leipzig
The festival is also interesting for regular travelers, because participation in it is a unique chance to visit the beautiful medieval fair, dark and captivating theatrical performances, music concerts and interesting seminars. It should be noted that special ‘Gothic’ tours are held within the framework of special events; main attractions for devotees of the subculture are ... Open »

Cityguide on traditions, mentality and lifestyle of people in Magdeburg. Learn the best periods to visit Magdeburg to discover its soul - authentic festivals, events and celebrations. We will also reveal the interesting habits, attitude towards the world and to tourists in Magdeburg.