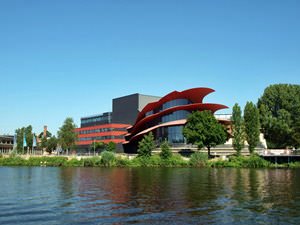 Potsdam has been kept the main residence of Prussian kings for long years, a great number of exciting palaces, centuries-old parks and gardens have been kept in the city. A lot of sights of the city are epoch-making objects, the city’s guests have big and variable program. The city’s symbol is fantastic palace complex Sans-Souci, whose name means “careless”.
Extraordinary weekend in Potsdam - unusual places, services and attractions for travel gourmet
…

Open
Architectural ensemble involves several important buildings, including Summer Palace which was built in the middle of 18 century, it is the great example of Rococo style. Next to it there is New Palace, whose constructing was finished in 1769 after 6 years of building. The New Palace represents the best traditions of Prussian Baroque style, it is the most dimensioned building on the city’s territory.
Except of beautiful palaces Sans-Souci involves several age-old temples and pavilions, the great number of monuments and sculptures, and fantastic botanical garden. Another complex “New Garden” is attractive too. Its main decoration is Marble palace, which represents classicism style. Next to it there is the Cecilienhof palace and unusual portal of Egyptian style, pyramid and sphinx. Copyright www.orangesmile.com
Guide to Potsdam sightseeing - things to see and to visit
This city is located near Berlin in a very picturesque place. A large park complex includes a system of lakes, the largest of which is Wannsee. Among the parks and gardens you can see many …

Open
After visiting of palaces tourists can walk along big park and look at the secular trees. People who like to walk on foot will like the Babelsberg Park, on its territory there are two age-old palaces. Flatowturm tower is original object, whose height is 46 meters. On its top there is good observation desk, where unbelievable view is available for guests. 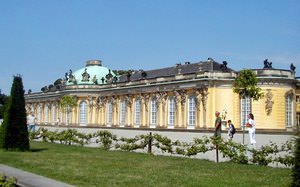 Near the park it is the Weaving Block, which is noted for the number of interesting historical buildings. Among them Friedenskirche church is the most important; it was found in 18th century special for Bohemian protestants. Lindstedt palace represents later period, building of this architectural monument has been lasted about 2 years and it was finished in 1860. Also the city’s guests note the walking along Dutch block, which was found in the first half of 18 century, it is noted for interesting and original buildings.

This guide to traditions and festivals in Potsdam is protected by the copyright law. You can re-publish this content with mandatory attribution: direct and active hyperlink to www.orangesmile.com.
Potsdam - guide chapters 1 2 3 4 5 6

Cathedrals and basilicas near Potsdam
♥   Basilika Unserer Lieben Frau vom Rosenkranz („Rosenkranz-Basilika“), Berlin, 19.4 km from the center. On the map

♥   Stadtkirche Sankt Marien, Wittenberg, 65.6 km from the center. On the map

Unique landmarks in Potsdam and around 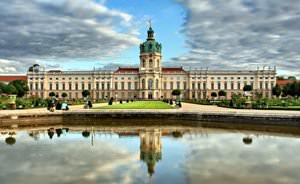 Distance from Potsdam center - 21 km.
The old palace is also available for visiting. It will not be enough for a whole day to see all its sights. The tour starts with a visit to the Ceremonial Hall. It is one of the largest rooms. Beautiful old bas-reliefs and decorations from the early 18th century are preserved in this high-vaulted hall. The Porcelain Room is no less interesting. A rich collection of ancient Chinese porcelain is stored in it. … Read further 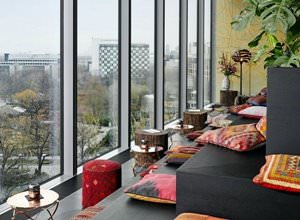 Distance from Potsdam center - 22.3 km.
Natural materials and fabrics were mostly used for the bar’s decoration. According to this, people feel themselves in a harmony with nature. There are a lot of plants and usual tables are placed by the glazed stubs. The bar is located in the same building with the popular Berlin hotel. Its guests can come to the bar at any time and without queues. Other have to book the table beforehand. In warm season the bar is usually rented for ceremonies. … Read further 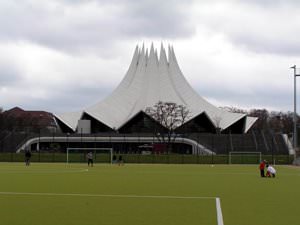 Distance from Potsdam center - 24.8 km.
In 2005, the opening of a unique bath complex "Liquidrom" took place in Berlin, which is a cross between a state-of-the-art sauna and a night club. The complex occupies a spectacular building in a futuristic style, it has a chic panoramic sauna and a real Finnish sauna, as well as massage rooms and even a salt cave. One of the favourite places of rest for visitors is a huge swimming pool with artistic lighting. The pool is filled with sea water, and also supplemented by a special system of underwater music. … Read further

Colors of Potsdam in photos

Traditions and festivals in cities around Potsdam

Berlin
Beer lovers simply can’t fail to be attracted by the festival called Beer Mile, which is held on the first Saturday of August. All main celebrations take place in Friedrichshain district that prepares for the celebration - beer tents are set along a beautiful avenue. In these tents visitors can try best drinks from breweries from around the world. The first festival was held ... Open »
Dessau
Heavy metal is also widely loved in Kurt Weill's hometown, which is confirmed by the Metalfest held at the end of May and attended by around 27,000 people every year. Among its headliners are the most famous and popular bands playing in the genres of thrash, heavy, power, Viking metal. This is one of the major events of this kind not only in the region, but also in the whole ... Open »
Magdeburg
A mandatory attribute of the fair is mulled wine stalls. Each one offers the popular drink prepared according to a special recipe. One of the main gastronomic symbols of Christmas in Magdeburg is Grünkohl, which is prepared from a special type of green cabbage grown on nearby farms. The cabbage is stewed with various sausages or smoked loin. The recipe for this dish was ... Open »
Cottbus
The tiny German town is known to many for its festivals and holidays. For years, Cottbus has been a permanent venue for the East European Film Festival, which is considered one of the most prestigious in the world. Famous film directors, actors, and producers visit Cottbus every year since 1991 when it was held for the first time. This large-scale festival is equally ... Open »
Halle an der Saale
Arriving in Halle at the end of August, you can witness such an event as Laternenfest. It takes place on Peißnitz island located in the territory of the city. At this time, besides a colorful action with the participation of thousands of lights filling all around and immersing in the atmosphere of a fairy tale, you can enjoy rides, watch the fireworks in Giebichenstein ... Open »
Leipzig
As festival became an official event of international scale, the preparation for it is held in a special way. Local residents have long been accustomed to the unusual event, so guests of the festival are taken very friendly and with a share of curiosity. It is worth noting that Goths arriving to the festival are also very friendly, many of them are willingly taking pictures ... Open »

Cityguide on traditions, mentality and lifestyle of people in Potsdam. Learn the best periods to visit Potsdam to discover its soul - authentic festivals, events and celebrations. We will also reveal the interesting habits, attitude towards the world and to tourists in Potsdam.