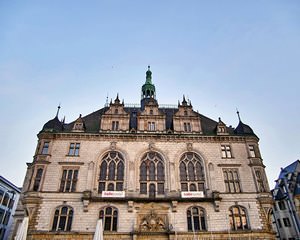 Halle is known primarily as Georg Handel's hometown and secondly as a large industrial city where the salt industry prevails. Even the name of the city comes from the Celtic language as "a place rich in salt". Like any other German city, it is famous for its rich history, and locals are very proud of their heritage. Speaking about them, it is worth mentioning that they are friendly and always ready to help people. You should not be afraid to turn to them - despite the fact that they are not used to express emotions and always seem to stand aside, you can be sure they will provide the necessary assistance, if necessary.
Halle an der Saale design-hotels for stylish travellers
The popular Hotel Atlas Halle is an example of elegance and modern style. Its interiors are painted with a predominance of exquisite coffee color. Some rooms have chic parquet floors while …

Open
The main quality of local people is thrift. It is manifested in everything - they're trying to save money, time and energy. And they are quite good at this - we all should learn from them, as it helps a lot in everyday's life. The punctuality of local residents should also be taken into account. The same is expected from the interlocutor - in general, being always polite and tactful, locals always expect the same attitude towards them. We can talk about their tolerance for hours, but it's also worth mentioning its limits, which can be reached if you behave in a completely impolite way. However, it’s quite easy to get in good with natives - just say a couple of phrases in their favorite German language.
The Osterland dialect prevails here, but when communicating with tourists, locals use traditional German - there is no need to worry about the fact that you may misunderstand people from Halle. Dishes you definitely must try include Harzer cheese, Eintopf (vegetable soup), Halberstadt sausages, pork baked in dough, as well as the so-called "country-style breakfast" (mainly consists of scrambled eggs and potatoes). Well, the meal can be finished with something containing sauerkraut and asparagus - whatever else, but dishes of this kind are prepared best of all here. The most popular alcoholic drink is wine, so be sure to try local wines. Copyright www.orangesmile.com
Top places to stay in Halle an der Saale - most luxurious hotels
Halle is home to a decent selection of prestigious hotels that will suit wealthy guests. One such is the luxurious Dormero Hotel Rotes Ross, which is situated just a few minutes’ walk …

Open
Since Halle is Georg Handel's hometown, it is not surprising that Handel Festival in honor of the famous native is held here. Its locations are many institutions throughout the city (theaters, opera houses, concert halls). You can listen to classical works of talented composers, not only Handel. Nevertheless, the major focus is on the work of the great composer who was lucky enough to be born in such a wonderful city as Halle an der Saale. Attending the festival is a great honor both for visitors and participants, since only famous and talented orchestras, performers, and conductors gather here. 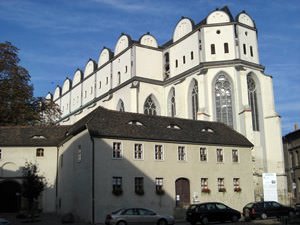 Arriving in Halle at the end of August, you can witness such an event as Laternenfest. It takes place on Peißnitz island located in the territory of the city. At this time, besides a colorful action with the participation of thousands of lights filling all around and immersing in the atmosphere of a fairy tale, you can enjoy rides, watch the fireworks in Giebichenstein Castle and ducks swimming in the River Saale. Of course, all this is accompanied by music, shows, and entertainment for everyone - no one will be bored during the festival. It is a very picturesque festival that leaves only pleasant impressions not least because everyone can find themselves entertainment to their liking here.
Best hotel choice for romantic escape, wedding or honeymoon in Halle an der Saale
When choosing accommodation for a romantic getaway in Halle, you should pay attention to the upscale Maritim Hotel Halle. Its spacious and bright rooms are painted in cream colors and …

Open
Mid-April in Halle is marked by such an event as Doppeltes Burgfest, which is sure to delight all fans of medieval-style festivals. Giebichenstein Castle serves as the venue. There is a fair in the lower part of the castle, circus performances of equilibrists, and, of course, tournaments between knights encased in armor. The upper part hosts the main events - theatrical performances, shows of archers and harlequins, music immersing in the atmosphere of the Middle Ages. 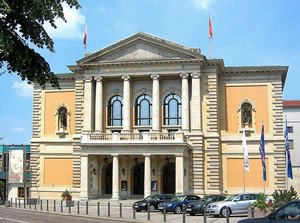 At the end of September, Halle an der Saale is honored as a city rich in salt deposits through such a popular event as Salzfest. The venue is Marktplatz. In addition to the main event - the fair's opening - the audience can enjoy rides, workshops, presentations of traditional local crafts, and all this is accompanied by music. Of course, the holiday is not complete without children's laughter ringing and joy reigning around. Attending the festival is a great opportunity to feel the holiday atmosphere and get acquainted with the local traditions.
Guide to Halle an der Saale sightseeing - things to see and to visit
Halle is a German city located on the Saale River. This is an administrative center of the district of the same name. The population of Halle estimates 236 thousand of people according to …

Open
At the end of April, there is one of the city's most interesting events, a kind of opening of the “summer season of fun”. Its name is Ein Tag im Turm, and it is held in Turm Nightclub. This is 24 hours of music, dances, shows, and theatricals. At the same time, the so-called “Biergarten” opens, where both locals and tourists have fun. Organizers of the festival are trying to make this one day memorable for everyone, giving people only pleasant impressions. It must be said that they are very good at this. 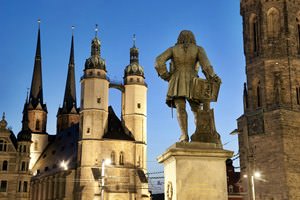 No German city can be imagined without the traditional Weihnachtsmarkt, that is, the Christmas Fair. And not without reason - it's is hard to imagine a more suitable place for Weihnachtsmann. One of the fairs opens on Marktplatz, being an excellent example of how a real Christmas fair should look like - here you can buy tasty food, entertain kids with rides, and listen to music. The scale is truly grandiose - here you can feel the presence of a fairy tale, which is never too late to believe in. The second fair opens on Große Ulrichstr 38. It is a bit smaller than Marktplatz Fair but not inferior by the atmosphere - here everyone can feel the coming holiday as close as possible.

This guide to traditions and festivals in Halle an der Saale is protected by the copyright law. You can re-publish this content with mandatory attribution: direct and active hyperlink to www.orangesmile.com.
Halle an der Saale - guide chapters 1 2 3 4 5 6 7

Cathedrals and basilicas near Halle an der Saale
♥   Dom SS. Peter und Paul, Naumburg, 40.7 km from the center. On the map

♥   Schloßkirche, Wittenberg, 60 km from the center. On the map

♥   Stadtkirche Sankt Marien, Wittenberg, 60.3 km from the center. On the map

♥   Kaiserdom SS. Mauritius und Katharina, Magdeburg, 73.8 km from the center. On the map

♥   Kathedrale Sankt Sebastian, Magdeburg, 74.1 km from the center. On the map

Survived castles around Halle an der Saale
♥   Castle 'Giebichenstein Castle' , 3.2 km from the center. On the map

Colors of Halle an der Saale in photos

Traditions and festivals in cities around Halle an der Saale

Leipzig
The festival is also interesting for regular travelers, because participation in it is a unique chance to visit the beautiful medieval fair, dark and captivating theatrical performances, music concerts and interesting seminars. It should be noted that special ‘Gothic’ tours are held within the framework of special events; main attractions for devotees of the subculture are ... Open »
Dessau
Since the famous composer Kurt Weill was born in Dessau, it is not surprising that the city hosts a festival in his honor (Kurt Weill Fest). This happens in late February and lasts until mid-March. Given that a significant part of the composer's life was spent in other cities like New York and Paris, the festival takes place in the New York or Paris spirit. The venue of the ... Open »
Magdeburg
Fans of event tourism will be interested in visiting the city on the eve of the Christmas celebration when Magdeburg changes beyond recognition. The streets are decorated with artistic illumination, thematic installations and special trade zones for fairs are installed throighout the city. Christmas holidays will be a great opportunity to get acquainted with the gastronomic ... Open »
Thuringia
Many fans of event tourism are eager to see Erfurt on Christmas Eve, as the region literally transforms beyond recognition. According to preliminary estimates, Erfurt Christmas Market is annually visited by about 2 million foreign visitors. For more than 150 years, it has being taking place at the Cathedral Square; 200 wooden stalls are set there, each of which offers ... Open »
Potsdam
After visiting of palaces tourists can walk along big park and look at the secular trees. People who like to walk on foot will like the Babelsberg Park, on its territory there are two age-old palaces. Flatowturm tower is original object, whose height is 46 meters. On its top there is good observation desk, where unbelievable view is available for guests. Near the park it is ... Open »
Braunschweig
Another interesting option to explore the local culture is, of course, festivals. And their number in Braunschweig is large enough to consider the city worth a visit. Without exaggeration, Schoduvel can be called the most colorful event. At the same time, it is the oldest festival in the whole of Germany. It falls at the end of February, sometimes March (always on Sunday), ... Open »