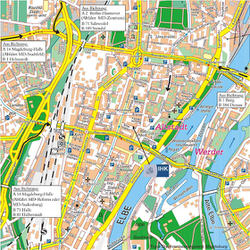 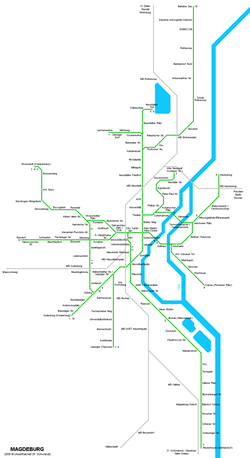 Interactive maps of hiking and biking routes around Magdeburg

1. You can zoom in/out using your mouse wheel, as well as move the map of Magdeburg with your mouse.
2. This interactive map presents two modes: 'Biking Routes' and 'Hiking Routes'. Use the '+' button on the map to switch between them.

This Magdeburg map has two modes: 'Railway Network' and 'Landscape & Rural Map'. Use the '+' button on the map to navigate.

Our guide to Magdeburg

Magdeburg is an ancient city and the capital of the Saxony-Anhalt federal district. This place is situated on the bank of the river Elbe. During the times of Emperor Otto I the Benedictine monastery was built in the city, but because of this monastery the city was ambushed all the time by enemies who wanted to establish their authority. Their attempts finally brought success in spring 1631, when the imperial … Open

The first reference of Magdeburg dates back to the 805. The great many of significant events embodied in the city landmarks and sights took place in the 12 centuries of the city history. The buzz and vivacity peculiar to all the large cities do not take from the cultural merit of the city. Curious travelers will love Magdeburg. The Magdeburger Dom is the peculiar symbol of the past age. Its construction began in … Open

Magdeburg offers various entertainments fitting every fancy to its guests. The city visitors will get a chance to explore the local natural attractions and recreate in beautiful parks, walk through exciting colorful marketplaces and visit different shopping centers and in the evening set off to one of the night clubs. Established in 1950 the Zoological garden of Magdeburg has turned to an excellent place of family … Open

Magdeburg features a vast choice of restaurants, bars, pubs and cozy coffee houses. The Landhaus Hadrys restaurant is an attractive gastronomy establishment serving ethnic cuisine. There one can spend a romantic evening as well as learn the local culinary traditions. The restaurant features the vast selection of dishes, rich wine list as well as ambient interior of the hall. The high quality service will add to the … Open

Street performers and jugglers entertain crowds on the streets for several days. A significant part of the festival program is focused on children. Some of the most interesting are performances organized by the local puppet theater. During the festival days, Magdeburg opens a medieval market where visitors can buy beautiful historical costumes in the national style, interesting handicrafts and souvenirs. Visitors … Open

During a walk around the city, you can see a lot of symbolic sculptures and statues. In one of the city squares, there is a sculpture of the Magdeburg Rider. This sculpture was installed in the square more than a hundred years ago. According to historical data, the prototype for its creation was the Kaiser Otto I. In the 1960s, it was decided to move the original sculpture to the Magdeburg’s Cultural History … Open