Cuisine of Belgorod for gourmets. Places for dinner - best restaurants 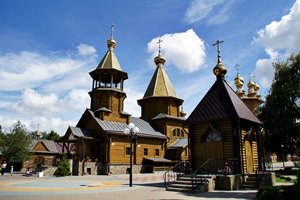 Belgorod is a typical Russian city with its classic culinary features. For a long time it developed as a military and industrial center, the base of the population of which were military, merchants and industrialists. Their culinary preferences are reflected in modern cookery. Initially the locals preferred affordable, simple and nutritious food. As for the features of the modern gastronomy of Belgorod, it is characterized by all the features characteristic for large cities.
Your active city break in Belgorod. Attractions, recreation and entertainment - best places to spend your day and night here
It is difficult to call Belgorod a purely tourist city, but it can offer a variety of options for active recreation. Locals have one of the most sought-after places of rest which is the …

Open
In Belgorod there are a lot of restaurants with cuisines of different nations of the world. There are popular establishments offering fast food, as well as pizzerias popular with the locals. But initially in Belgorod, only Russian cuisine was presented in the simplest, folk version of it. If you appreciate the gastronomic predilections of the townspeople who lived in Belgorod a hundred years ago, you can say that the basis for their food was various types of cereals, rye bread, vegetables, mushrooms and berries, and the most popular sweet honey.
Belgorod is the birthplace of thick jelly, which was brewed from berries and considered a special delicacy. In an earlier period, the basis of nutrition of locals was rutabaga and lentils, but with the advent of potatoes and tomatoes, these products practically disappeared. Originally Russian dish, which is very popular in Belgorod, are considered pancakes. In Russia, pancakes appeared even in times of worship of pagan gods and symbolized the life-giving sun, and even after the adoption of Christianity they retained their ritual significance. In national restaurants of Belgorod, visitors are kindly requested to try pancakes with meat, fish, mushrooms or caviar. Copyright www.orangesmile.com
Guide to Belgorod sightseeing - things to see and to visit
Belgorod is a modern picturesque city with a long history. The first settlements on its territory appeared at the end of the 10th century, and the city was founded much later, in the XVI …

Open
Ruddy pies with a variety of fillings are also popular and common treats. Until now, it is customary in the city to greet guests with home-made pies. Another feature of Russian cuisine is the diversity of the first dishes. For those who decide to dine in one of the restaurants of the classic Russian cuisine, it is certainly worth ordering a signature soup or borsch. Very popular among fans of simple and delicious food is a salt wort/hodgepodge, rassolnik, cabbage soup (shchi) and fish soup. Among the cold soups that are eaten in the summer, beetroot and okroshka remain the most popular. As for drinks, the choice here is enormous: from soft non-alcoholic cocktails and dozens of beers to fine wines, cognac and Russian vodka.

This guide to cuisine and restauraunt in Belgorod is protected by the copyright law. You can re-publish this content with mandatory attribution: direct and active hyperlink to www.orangesmile.com.
Belgorod - guide chapters 1 2 3 4

City tours, excursions and tickets in Belgorod and surroundings

Searching where to eat - restaurants and cafe on Belgorod map

Cuisine and restaurants in the neighbours of Belgorod

Kharkov
Holidays in Kharkov would be incomplete without a visit to local restaurants; some of them are very unusual and attractive places. One of the best restaurants in the city is Vzletayushiy Drakon; it specializes in Asian cuisine. The restaurant's menu is dominated by popular Chinese, Vietnamese and Japanese dishes, but there is a number of treats for fans of European cuisine. The ... Open »
Dnepropetrovsk
An original establishment is the restaurant Goodzone, which offers visitors, unique author's dishes. Each of the restaurant’s refreshment is unique. Connoisseurs of modern cuisine will surely like to rest here. The restaurant Camelot specializes in cooking European cuisine. It can be recommended to vegetarians. The choice of all kinds of salads, vegetable stews and fruit ... Open »
Zaporozhye
On the Stalevarov Street, there is a famous restaurant "Eurohat". Signature treats here are incredibly delicious and the menu features dishes exclusively of Ukrainian cuisine. Prices in the restaurant always remain at an attractive level, so the flow of visitors here is great at any time of the day. One of the best fast-food establishments in the city is the "Kartoplyana ... Open »
Bryansk
The restaurant "La Veranda" specializes in the preparation of dishes of Italian cuisine. It features an original decor in a romantic style. In the restaurant, visitors are offered several variants of pizza and pasta, as well as a decent selection of elite wines and delicious ice cream. Among the restaurants of Russian cuisine, the leader is the "Cossack Farm", fans of hearty ... Open »
Kiev
It’s not easy to choose the best one among hundreds of Kiev restaurants. Let’s start the story about most attractive gastronomic points of interest with the review of national cuisine restaurants. The attractive Varenichnaya #1 restaurant is decorated in the style of past centuries. The specialty of this place is vareniki (kind of dumplings). This popular national dish here ... Open »
Kaluga
On Theater Square, there is an attractive cafe with a romantic name "Prague", which also deserves the attention of discerning gourmets. The cafe has an open veranda that looks directly to the square, so during a meal, visitors have the opportunity to admire the picturesque landscape. The cafe offers a huge selection of salads, original snacks and desserts for a moderate ... Open »

Travel notes on best cuisine and restaurants of Belgorod (Russia) on OrangeSmile.com. Famous recipes and traditional dishes and courses in Belgorod restaurants. Where to eat - our recommendations on popular places in Belgorod, where you can taste delicious meal and also spend a good time with your friends.