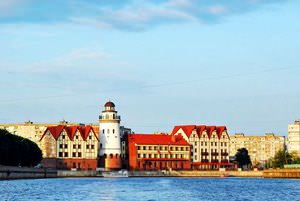 Kaliningrad is a beautiful Russian city with an abundance of interesting traditions and its unique way of life. About some traditions and customs, travelers are best to know in advance, because they require special moral preparation. Everyone who comes to Kaliningrad in the summer, just have to swim in the Baltic Sea. At first glance, the tradition does not seem unusual, because Kaliningrad is a seaside city, and it is natural to swim in the sea. The thing is that the Baltic Sea is cold, and Russians, accustomed to the warmth of the Black Sea, do not always want to plunge into the cold waters of the Baltic.
Advices to travellers: what you should know while being in Kaliningrad
1. Arriving in Kaliningrad, it is worth bearing in mind that the time zone here is Eastern, that is, the city is one hour behind Moscow. 2. Local airport "Khrabrovo" is located outside …

Open
Also, everyone is simply obliged to try locally prepared eel, because here it is considered the most popular national delicacy. It should be noted that the formation of the culinary traditions of Kaliningrad was seriously influenced by neighboring countries. Local cuisine is also a rather interesting feature of the city, as it differs markedly from the classical cuisine prevailing in other cities of the country.
There is a tradition to bring from Kaliningrad products made of amber, of which many are sold here. It is not necessary to go for amber in shops and souvenir shops, many visitors prefer to search for amber right on the coast. It is believed that at present the objects that never adorned the Amber Room are located in Kaliningrad. A significant part of modern scholars consider the legend of the Amber Room as a mere fiction, but its search in the city's territory continues all the same. Copyright www.orangesmile.com
Guide to Kaliningrad sightseeing - things to see and to visit
Kaliningrad is located at the confluence of the Pregoli River to the Kaliningrad Gulf, just where the Teutonic knights once laid a powerful stone fortress in the 12th century. Prior to this, …

Open
Beautiful traditions are associated with the wedding ceremony. The newlyweds must necessarily walk around the arms locked, on one of two bridges - the Jubilee or the Honey. Here, the newlyweds must hang the padlock, and the keys to it should be thrown into the river. Kaliningrad is a large seaport, and therefore the sea plays a very important role in the life of the indigenous population. The third toast during the feast is always pronounced for those who are at sea, clinking is not accepted. This is only a small part of those amazing traditions and features that Kaliningrad is rich in.

This guide to traditions and festivals in Kaliningrad is protected by the copyright law. You can re-publish this content with mandatory attribution: direct and active hyperlink to www.orangesmile.com.
Kaliningrad - guide chapters 1 2 3 4 5 6

Cathedrals and basilicas near Kaliningrad
♥   Königsberg Cathedral, Kaliningrad, 0.9 km from the center. On the map

Survived castles around Kaliningrad
♥   Castle 'Königsberg Castle' , 0.6 km from the center. On the map

Colors of Kaliningrad in photos

Traditions and festivals in cities around Kaliningrad

Klaipeda
Locals provide special attention to holiday arrangement, so more than a hundred exciting activities for every taste are held in one day. The final of the Marine Day is a night parade of ships, which usually starts at 10 pm. The parade is attended by more than forty ships; each of them is decorated with illumination system. The ceremonial parade looks very impressive. After the ... Open »
Gdansk
Fans of theater art should not forget to visit Gdansk in July, when the city hosts the festival of street theaters. The main celebration takes place on the streets of the Old Town. For the purpose of the festival here are set stages, which are used for performances of theater groups. In accordance with an old tradition, the festival is accompanied by numerous funny fairs and ... Open »
Palanga
A music festival named “Lygus balsai” engages many famous ethnic groups and folk-song singers. The same interesting and attractive event of the period is the Baltijos bangeles music festival which engages kids’ music groups and bands. Numerous bright and remarkable events being of great interest for city visitors and tourists take place on the first weekend of June. ... Open »
Kaunas
Travellers, who visit local markets and craft shops, will be surely amazed by a huge choice of interesting souvenirs and household items, which are made by local craftsmen. Items made of wood are particularly popular with tourists. Numerous home decorations of different designs and even handmade furniture are real masterpieces that cannot leave anyone indifferent. If wood ... Open »
Bialystok
Some ways of expressing politeness may seem a bit unusual to foreigners, but it’s impossible to call them unpleasant. For example, when entering a governmental office or a shop, it is important to greet people inside. Sellers will surely greet visitors first and offer their help. In cafes or restaurants, tourists must be prepared to hear phrases like “bon appetite” from ... Open »
Warsaw
Severe hard music is equally popular here. This is evidenced by holding such an event as Helicon Metal Festival at the beginning of September. VooDoo Club liked by youth serves as the venue. You can listen to metal of different directions, and the purpose of the festival is that fans of this kind of music can discover its new facets and, of course, new musicians on the Polish ... Open »

Cityguide on traditions, mentality and lifestyle of people in Kaliningrad. Learn the best periods to visit Kaliningrad to discover its soul - authentic festivals, events and celebrations. We will also reveal the interesting habits, attitude towards the world and to tourists in Kaliningrad.