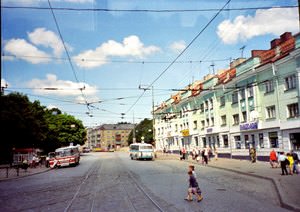 Kaliningrad has many attractions that must be seen. One of the most unusual attractions is the sculpture of fighting bison. The city was presented by the Prussian Ministry of Culture, and the author of this unique work is August Gaul. Although the "Fighting Bison" is the official name of the sculpture, locals call it "Prosecutor and Defender", since in 1914, alongside it were built the buildings of two courts - land and administrative.
Authentic traditions, festivals and lifestyle of Kaliningrad inhabitants
Kaliningrad is a beautiful Russian city with an abundance of interesting traditions and its unique way of life. About some traditions and customs, travelers are best to know in advance, …

Open
The Museum of the World Ocean is the first comprehensive museum in the territory of Russia in which expositions dedicated not only to marine flora and fauna, but also to navigation, as well as hydrology, are collected. The museum has an ecological station and a marine library. Together with the museum they make up a unique scientific and cultural center across the country. On the street "Bogdana Khmelnytsky" there is an impressive neo-Gothic building, whose high lancet tower is visible from afar. This is the Catholic church of the Holy Family. A beautiful Lutheran church is one of the most spectacular architectural landmarks of the city.
An immortal symbol of Kaliningrad and a landmark known far beyond the borders of the country is the Amber Museum. It is located in the central area of the city, on the shore of the upper lake. Previously, there was a tower of the Don, named after the distinguished general-field marshal who participated in the war against Napoleonic France. The most cheerful monument of the city is dedicated to Baron Munchausen and is located in the central park, next to the majestic Queen Louise church. This sculpture was given to Kaliningrad by the German city of Bodenveden, which is considered the birthplace of Baron Munchausen. Copyright www.orangesmile.com
Your active city break in Kaliningrad. Attractions, recreation and entertainment - best places to spend your day and night here
Kaliningrad is a large regional center, and therefore there is enough entertainment for every taste. There are a lot of night clubs with a wide variety of entertainment programs, as there …

Open
Kaliningrad is often called the "gate city"; there are really a lot of them here. At the Marshal Vasilevsky Square, not far from the Amber Museum, there is the Rossgarten Gate, which received its name in honor of one of the Konigsberg suburbs. Earlier, the gate served as a point for checking documents and collecting tax from visitors, and now there is a restaurant with a melodic name "Sun Stone". "The Ausfal Gate" is located at the intersection of the Guards and Moscow avenues, directly opposite the bastion "Astronomical". These gates are very old and were built in 1626. In the mid-19th century fortifications were modernized, and as a result, the gates were much lower than the level of fortifications. Later the gates were decided to be converted into a tunnel, today it passes under the ramparts.

In the section below, you can get one of our excursion, activities or city discovery tours over Kaliningrad and surroundings. Our website offers 10-30% lower ticket prices, when compared to the offline purchase on the spot.

This guide to cultural sights Kaliningrad is protected by the copyright law. You can re-publish this content with mandatory attribution: direct and active hyperlink to www.orangesmile.com.
Kaliningrad - guide chapters 1 2 3 4 5 6

Unique spots in Kaliningrad and near 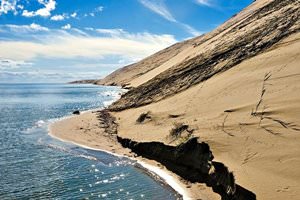 Distance from Kaliningrad center - 69.6 km.
Another amazing sight is to be found on the border of Russia and Lithuania. This is the Curonian Spit, a narrow and long sandy belt of land that originates in the territory of the city of Zelenogradsk in Russia and ends in the territory of Klaipeda in Lithuania. The land strip is a distinctive dividing element between the Curonian Lagoon and the Baltic Sea. The length of the sand spit is about 98 km, and the width varies from 400 to 3800 meters. … Read further

Photogallery of cultural heritage of Kaliningrad

Excursions over cultural sights of neighbours of Kaliningrad

Klaipeda
The equal popularity shares the Blacksmith Museum. Blacksmithing is a national craft and museum exhibits exactly can be called works of art. It’s worth to mention that there is an sales exhibit of works of modern masters in the museum, so everyone can buy a unique souvenir as a memento. A particular attraction of Klaipeda is the Sculpture Park, where the most incredible ... Open »
Gdansk
Dwor Artusa building, the construction of which was finished in the beginning of the 14th century, is a no less interesting object of excursions. Shortly after the completion of the building a huge fire damaged it severely. It took almost a hundred years to bring the building back to its original form. Tourists are usually offered to participate in guided tours through the ... Open »
Palanga
The construction of the church was initiated by mentioned above Count Tyszkiewicz who heavily invested in the undertaking from his own purse. Another stunning landmark is the Old drugstore which has been working since 1827. The destination is worth visiting even if drugs are unnecessary. The matter is that the drugstore is located in a wonderful wooden house which is well worth ... Open »
Kaunas
The House of Perkunas is located nearby. This is a beautiful red-brick building of an unusual architectural form. Originally the house belonged to a merchant cooperative. This part of the city is the location of very important religious landmarks - the Church of the Holy Trinity and Vytautas Cathedral located near the church. These buildings were built in the 15th century and ... Open »
Bialystok
Bialystok is an old city, so a mere walk on its central district can easily replace an excursion. Such buildings as Dom Koniuszego or the House of the Equerry, both of which belong to the 18th century, have become true architectural landmarks of the region. The Palace of the Lubomirski family and the magnificent Dojlidy Park that is adjacent to the building is also a popular ... Open »
Warsaw
The city is also home to several ancient palaces, the most famous of which is the Royal Castle. The main building of the palace was built in 1618. During the long history of the palace its territory has expanded greatly and so new wings and outbuildings appeared there. All visitors are welcome to walk through most beautiful rooms of the palace, each of which has its own ... Open »

Culture guide to Kaliningrad. Which fascinating sights to visit once you are in Kaliningrad: temples, churches, museums, theaters and castles. Recommendations (with addresses, phone numbers and links) on the places 'must visit' in Kaliningrad. Plan your own city excursion by using this page info!