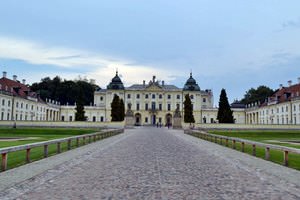 Bialystok and its neighborhoods have much to offer to tourists. There are many unusual places of interest that attract tourists from all over the world to the city. Start your acquaintance with Bialystok from the central market. It has an unusual triangle shape and is one of the oldest markets not only in the city but also in the whole country. It is possible to buy virtually everything there, from fresh food and pastries to handcrafts and souvenirs. One of the most prominent landmarks of Bialystok, the City Hall building, is located in the center of the market. After a thorough restoration, a museum appeared there, so all tourists can now take a look at priceless historical artifacts and get acquainted with the history of one of the oldest cities in Poland.
Best hotel choice for romantic escape, wedding or honeymoon in Bialystok
Quiet and picturesque Bialystok is perfect for romantic vacations, and a suitable accommodation place will contribute to great impressions. Hotel Branicki set in a gorgeous historic building …

Open
Podlasie Museum is one more landmark that tourists will find interesting to attend as the venue exhibits a rich collection of ethnographic and archeological artifacts. One of the museum’s halls is dedicated to a collection of art with “portraits of great Polish personalities”, so fans of art will also not be disappointed with the museum. The city’s neighborhood is the location of one more museum that is worth visiting – the Bialystok Open Air Museum of Wooden Architecture. This is a large open-air complex that greets thousands of tourists every year. Other interesting cultural venues of the city are the Military Museum and numerous art galleries, the majority of which are located in the historical district of the city.
Gorgeous historical buildings remain the main treasure of Bialystok. There are more than two hundreds of them in the city. Absolutely all vacationers should see Branicki Palace – the magnificently elegant building even has an informal name “Polish Versailles”. A large park area surrounds the building, so tourists are welcome to make a peaceful stroll in the shade of century-old trees. Copyright www.orangesmile.com
Shopping in Bialystok - main shopping streets, outlets and boutiques
Białystok is full of attractive trading complexes. Galeria Alfa is among the most popular. This complex is the largest in the city and located in a vibrant central district. It houses over …

Open
It is possible to see many old mansions and villas during a walk in the historical district of the city. Many of these eye-catching buildings have a rich history full of interesting stories and legends. Out of religious landmarks of Bialystok, it is important to mention an ancient church that was formed by merging two ancient churches. There are also several old cathedrals that keep many precious relics. Having explored Bialystok, consider visiting the small town of Tykocin that is also famous for its architectural landmarks and stunning natural attractions. 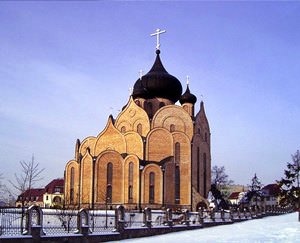 Bialystok is an old city, so a mere walk on its central district can easily replace an excursion. Such buildings as Dom Koniuszego or the House of the Equerry, both of which belong to the 18th century, have become true architectural landmarks of the region. The Palace of the Lubomirski family and the magnificent Dojlidy Park that is adjacent to the building is also a popular destination for both local people and guests of the city. The eye-catching 20th-century building belonged to the famous family of factory owners in the past. When it comes to religious landmarks of the city, it is important to mention the Holy Mary Cathedral, the Masonic lodge, and the fabulous Orthodox church of St Nicolas the Miracle-worker. Fans of architecture will also find it interesting to visit the Church of Christ the King and St Roch Church as they are famous as the first modernist churches in the world.
Guide to Bialystok sightseeing - things to see and to visit
The population of this town mainly consists from Polish and Belorussian people. Bialystok is known by the large number of educational institutions as on its territory you will find 15 …

Open
Fans of art will find it incredibly interesting to attend the Alfons Karny Museum of Sculpture that is open in a beautiful historical villa that once belonged to General Mikołaj Fiedorowicz baron von Driesen. This museum exhibits a large collection of works by the famous sculptor and regularly hosts interesting temporary exhibitions, for example, the INTERGRART International Meeting of Sculpting in Granite in Maćkowa Ruda. 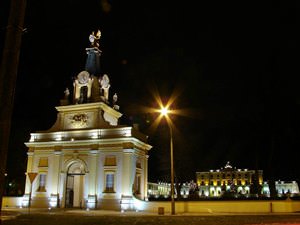 If we talk about religious monuments located on the territory of Bialystok, then the following should be emphasized. Firstly, there is the Bazylika archikatedralna Wniebowzięcia Najświętszej Maryi Panny. This temple is huge and is considered the most beautiful temple in the region. The old building was built in the 17th century. A new extension was built at the beginning of the 20th century. The church is famous for its magnificent interior decoration – especially the altars, stained glass windows, as well as the organ. The cathedral also has an attractive exterior, hence you should ensure not to miss such a building.
Cuisine of Bialystok for gourmet with top restaurants and cafe
The majority of local food is distinguished by simplicity, skillful use of different spices, and an unforgettable combination of cuisines of the world. Culinary traditions of Bialystok …

Open
There are also Orthodox churches in the city, called Parafia Prawosławna p.w. św. Mikołaja and Cerkiew więtego Ducha. The former shrine was built in the Byzantine style and is famous for its crypt, in which important Orthodox saints are buried – for example, the relics of the infant Gabriel. There are also very beautiful frescoes here, and a visit to the temple will leave nothing short of the brightest memories. Cerkiew więtego Ducha is the largest Orthodox Church in the city. It is built with the observance of modern trends and tendencies, and has the shape of flames. The construction of the church began in the 1980s and was completed in 1999. 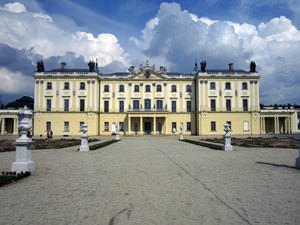 Parafia Rzymskokatolicka Sw. Rocha is another beautiful Catholic cathedral in Bialystok. The building looks rather unusual if you get to know that it is a religious monument. One notable thing in the church is the tower, which is definitely worth climbing to – at least to enjoy superb views of the city. The church was built in the year 1925. Its interior is rather ascetic, and its most important asset is the sculpture of Jesus Christ. It is also worth noting that a memorial in honor of those killed during the Holocaust is installed in Bialystok. The sculpture is very beautiful – especially so that people pay attention to it and do not forget the happenings of World War II.
Authentic traditions, festivals and lifestyle of Bialystok inhabitants
Local people are tactful and communicative people. During holidays and celebrations, they are friendly and like talking to people they know a little. They will have fun and tell jokes, …

Open
In addition to the Podlasie Museum, there are several other institutions in the city that are worth visiting. One of them is Muzeum Historii Medycyny i Farmacji, where exhibits such as medical instruments, ancient recipes, and alcohol preserved parts of the body affected by various diseases are presented – thus explaining how medicine has developed. Be sure to visit Podlaskie Muzeum Kultury Ludowej, in order to get closer acquainted with the life of the local residents. On the territory of the open-air museum you will discover interesting sculptures, houses in which the ancestors of locals lived at one time or the other, as well as buildings necessary for life support in the countryside – a mill, granary, hangar, bakery, and cheese-making factory.

This guide to cultural sights Bialystok is protected by the copyright law. You can re-publish this content with mandatory attribution: direct and active hyperlink to www.orangesmile.com.
Bialystok - guide chapters 1 2 3 4 5 6 7 8 9 10
Reference information
Map of all palaces

Public palaces near Bialystok
♥   Palace 'Lipnik Palace' Bielsko-Biała, 1.1 km from the center. On the map

♥   Palace 'Stanislawowka Palace' Grodno, 77.6 km from the center. On the map

Cathedrals and basilicas near Bialystok
♥   Bazylika Wniebowzięcia NMP, Sokoły, 34 km from the center. On the map

♥   Bazylika Narodzenia NMP i św. Mikołaja, Bielsk Podlaski, 40.4 km from the center. On the map

♥   Bazylika Ofiarowania NMP, Różanystok, 58.1 km from the center. On the map

Photogallery of cultural heritage of Bialystok

Excursions over cultural sights of neighbours of Bialystok

Brest
Museum of Railway Technology, founded recently, in 2002 will be very interesting for lovers of history. The exposition of the museum is unique and incredibly interesting. It includes more than 50 different carriages and locomotives of the last century. No less interesting are the expositions of the Archaeological Museum "Berestye". It is here that you can learn about the ... Open »
Warsaw
The city is also home to several ancient palaces, the most famous of which is the Royal Castle. The main building of the palace was built in 1618. During the long history of the palace its territory has expanded greatly and so new wings and outbuildings appeared there. All visitors are welcome to walk through most beautiful rooms of the palace, each of which has its own ... Open »
Kaunas
The House of Perkunas is located nearby. This is a beautiful red-brick building of an unusual architectural form. Originally the house belonged to a merchant cooperative. This part of the city is the location of very important religious landmarks - the Church of the Holy Trinity and Vytautas Cathedral located near the church. These buildings were built in the 15th century and ... Open »
Lublin
Not far from the cathedral is the Town Hall building, the construction of which was completed in 1828. It is still used for its intended purpose. The seat of the mayor, as well as the offices of various municipal organizations, are currently located in the historic building. At the beginning of the 17th century, there was a large monastery on the site of the Town Hall, which ... Open »
Vilnius
Hill of Three Crosses is a truly striking natural attraction. One of the highest hills is the location of a monument that was erected here back in the medieval period. The famous Three Crosses were completely destroyed during the Second World War. The restoration of the monument was completed only in 1989. Today there is a large observation deck next to the monument. This is a ... Open »
Kaliningrad
An immortal symbol of Kaliningrad and a landmark known far beyond the borders of the country is the Amber Museum. It is located in the central area of the city, on the shore of the upper lake. Previously, there was a tower of the Don, named after the distinguished general-field marshal who participated in the war against Napoleonic France. The most cheerful monument of the ... Open »

Culture guide to Bialystok. Which fascinating sights to visit once you are in Bialystok: temples, churches, museums, theaters and castles. Recommendations (with addresses, phone numbers and links) on the places 'must visit' in Bialystok. Plan your own city excursion by using this page info!