Sightseeing in Astana - what to see. Complete travel guide 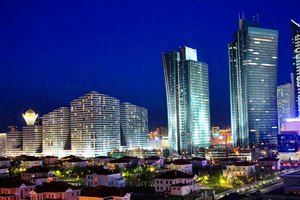 Astana is a wonderful eastern city and a center of cultural, state and social life of Kazakhstan. Year after year Astana becomes more popular and attractive for tourists, because here you can see not only historical and architectural sights, but also find numerous new entertainment centers and wonderful restaurants. New colorful trading districts and picturesque markets appear in Astana very quickly. This city has got many awards due to numerous religious monuments. In 1999 Astana got the status of “The city of the world”.
Cuisine of Astana for gourmet with top restaurants and cafe
In accordance with an old tradition, each meal is started with airan or kumiss. These drinks are not only delicious but also very good for health. Tea is a no less popular drink here. In …

Open
The central part of the city is called Water-Green Boulevard and is made for pedestrians only. The main facility and decoration here is a unique three-level bridge – a real masterpiece of modern architects. The lowest level of the bridge is used as a car parking. The central level is a place for offices, exhibition halls, shops and restaurants. The third level is a pedestrian street decorated with wonderful street lamps, sculptures and decorative trees.
Among modern buildings the one that is definitely worth visiting is Duman entertainment center. Its territory contains endless attractions, a cinema, a casino, a bowling, several trading halls, restaurants and a hotel. Here you can even visit an oceanarium, which attracts hundreds of visitors every day! During the excursion in this magnificent place you will be able to get acquainted with underwater life and see one of the most breathtaking activities – shark feeding. Copyright www.orangesmile.com
Authentic traditions, festivals and lifestyle of Astana inhabitants
Astana has become the capital of Kazakhstan relatively not long ago – the event took place in 1997. Since that time, The Capital Day, which falls on July 6, has become one of the most …

Open
If you’re into visiting religious sights, then don’t neglect Beit Rachel – Habbad Lyubavich synagogue and the central mosque Nur-Astana. Both buildings are quite unusual according to architectural traditions of East and their inner decoration is also wonderful. 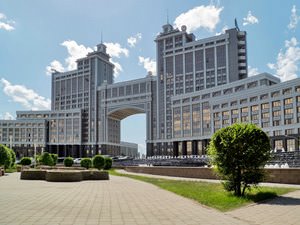 One of the main symbols of the modern Astana is the Baiterek monument - a beautiful tower in a futuristic style, which in the evening is decorated with a spectacular artistic illumination. In fact, this tower is an original entertainment centre, with several cafes opened within, some art galleries present, and spacious rooms decorated with aquariums with live fish. At the top of the tower, which is shaped as a huge globe, there is an observation deck.
Excursion over cultural sights of Astana - 'must visit' points of interest
In Astana, visitors will find dozens of different landmarks – historical places of interest and modern architecture iconic places, cultural venues and theatres, museums and beautiful …

Open
The world-known Hazrat Sultan mosque is also based in Astana - the largest mosque in Central Asia. It was built in 2012, and it is hard to find another mosque that would look as beautiful. Snow-white building of the mosque is built in accordance with all national traditions, and on the inside the mosque is decorated with plush turquoise carpets, huge crystal chandeliers and gold leaf finish. This attraction is also interesting to observe after dark, as it is decorated with spectacular illuminations. In front of the huge building is a spacious plaza with dancing fountains. 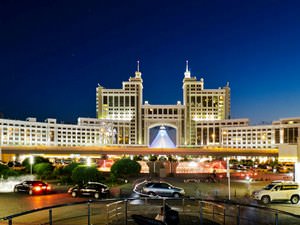 A visit to the Palace of Peace and Accord should definitely be part of your tour, this cultural centre was built in 2006. It is an incredibly beautiful building, done in the form of an Egyptian pyramid, with façade finished in mirrored tiles. Within the walls of this centre there are regularly interesting exhibitions and cultural events held for tourists. In the centre one of the most popular souvenir shops is located.
Your active city break in Astana. Attractions, recreation and entertainment - best places to spend your day and night here
Astana is a true paradise for fans of active pastime, nighttime entertainment, and shopping. The city is home to numerous entertainment centers, shopping complexes, discos and nightclubs …

Open
Khan Shatyr Entertainment Centre is a popular holiday destination for many guests of Astana. In addition to numerous shops, restaurants and attractions in this huge futuristic building is a gorgeous water park. It is equipped with several swimming pools and artificial beaches, sand for which was specially brought from the Maldives. Water park is decorated with live exotic plants and is open for visitors all year round. In this entertainment complex you can relax and have fun all day.

This guide to iconic landmarks and sights of Astana is protected by the copyright law. You can re-publish this content with mandatory attribution: direct and active hyperlink to www.orangesmile.com.
Astana - guide chapters 1 2 3 4 5 6 7 8 9 10 11 12 13

Sights around Astana from our guide 'Extreme places on Earth' 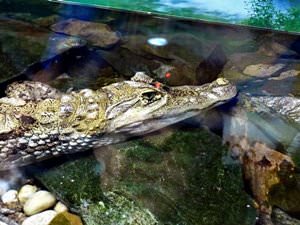 Distance from Astana center - 3.8 km.
Visitors will be able to visit an ultra-modern cinema, relax in one of the cozy cafes, walk around the shops, and even try their luck at the casino. Great entertainment and educational programs are offered to those who prefer activities related to the sea. Guests of the oceanarium can choose from a wide range of entertainment options, from traditional feeding sharks show to scuba diving and swimming in a huge aquarium with some of the most dangerous marine predators. The entertainment center will appeal to those who have long wanted to learn to dive. There they can train under the guidance of an experienced instructor and get a certificate. … Read further

Sightseeing in Kazakhstan: things to see

The modern capital of the country, Astana, is no less beautiful. The city is home to several important landmarks, such as one of the oldest universities in Kazakhstan, which was named after L. Gumilev. The university is surrounded by a big park, two theatres and several museums. … Open

Search touristic sites on the map of Astana

Sightseeing in regions nearby Astana

Omsk
There had been almost no Russians until the 16th century. The Turkic-speaking people mostly lived here. Only the conqueror of Siberia, Ermak, led the Russian people to these lands. They cultivated land as opposed to local hunters and herdsmen. In the 18th century, the Cossacks built boundary lines and fortresses and cultivated land here. At the same time, the defensive ... Open »
Kurgan
The local Kazakhs coming to these steppes repeatedly burned the settlement and killed the locals. However, the settlement was rapidly built up again and withstood all the trials. In 1782, it gained a city status. The new city was conditionally divided into two parts. The Old City was the Kremlin with towers and double gate surrounded by the New City protected by eight powerful ... Open »
Tyumen
For a few years, the territory of the city had increased. It was built up with very beautiful wooden mansions. Most of the local people were noblemen, the Cossacks and the Riflemen who protected the city from the Tatars and the Kalmyks. At the end of the 17th century, Tyumen was completely destroyed. All the buildings got burnt in a big fire. The new city started to be built ... Open »
Chelyabinsk
The laying of the railway caused the rapid development of the city. At the beginning of the 20th century, there were several industrial enterprises in the city territory. During the Great Patriotic War, Chelyabinsk gained its first unofficial name, Tankograd. Military equipment and ammunition were manufactured here. The contribution of the city to the Soviet army’s victory ... Open »
Barnaul
Now that the crisis is far behind, Barnaul is rapidly developing and flourishing, new office buildings of glass and concrete are being built in the center, which surprisingly change its appearance. It is worth noting that Barnaul is the unofficial capital of Altai, one of the oldest cities in the region and a popular tourist center. By population, Barnaul ranks second in ... Open »
Novosibirsk
The settlement had been full of life and had all the conditions for mutual trade until the 18th century, so it was flourishing and actively developing. At the beginning of the 18th century, all the local tribes of the Kalmyks went to the territory of present Mongolia. At that time, the Krivoschekovskaya Village was not Russian because the population was always mixed. On the ... Open »

All about Astana, Kazakhstan - sightseeings, attractions, touristic spots, architecture, history, culture and cuisine. Prepare your trip together with OrangeSmile.com - find out the 'must see' things in Astana, which places to visit, which excursions to take, where the breathtaking views are waiting for you. Planning your trip with this travel guide will help your to get the most out of Astana in few days.