Cuisine of Barnaul for gourmets. Places for dinner - best restaurants 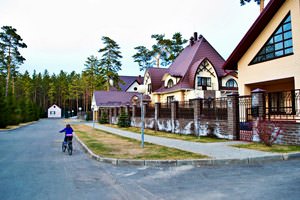 In the modern city you can find a variety of restaurants, as well as many cozy cafes and bars. Such national Barnaul cuisine is not here, because the city is multinational, and the traditions of the cuisines of different peoples are simply mixed up. As in any big city, there are restaurants where they prepare good rolls and sushi, pizza and popular burgers. Gourmets will be interested to try the classic Altaic treats, which are offered in popular city restaurants. This culinary direction has a lot of interesting features.
Guide to Barnaul sightseeing - things to see and to visit
Barnaul - the capital of the Altai Territory and the breadbasket of Siberia, a beautiful ancient city, founded in the middle of the XVIII century. Territorially it is located in the south of …

Open
The Altai cuisine is characterized by the so-called "cult of milk". It is the basis of many national dishes and is always present on the table. Even the local moonshine "araka" is made from milk. Taste wise, araka resembles serum, and it differs greatly from Russian vodka in strength, but it is quite possible to get drunk on it. Barley is also one of the important features of local cooking, usually added to soups. The first dishes here are cooked very thick and rich, always on a good meat broth.
There is also a special cheese, which is definitely worth a try. It is called "kurut" and is prepared for a long time. It is a typical food of steppe inhabitants, which is stored for months and does not deteriorate. To prepare the cheese, kefir mass is boiled for about two hours, after which it is filtered and the resulting curd mass is placed under press. When the mass solidifies, it is cut into wide and thin slices and dried over fire on a special grate. For many hundreds of years, the local people have been cooking their favorite cheese in the same way, the taste is simply unique. Copyright www.orangesmile.com
Excursion over cultural sights of Barnaul - 'must visit' points of interest
Barnaul is incredibly interesting from an excursion point of view. It clearly does not lack a lot of attractions and cultural sites. It should be borne in mind that initially Barnaul was an …

Open
Spices are not used inn Altai cuisine; here the natural taste of dishes is cultivated. That is why instead of spices and mayonnaise "kaimak" - a special sort of thick sour cream is often used. Kaimak is added to all salads from greens, which are prepared with the addition of wild garlic, onions and wild garlic. The main sweetener of the Altai cuisine is honey. The most valuable is wild forest honey; it is almost white and extremely dense. Honey is eaten with bread, and with its addition a lot of interesting desserts are prepared. Flour dishes with the addition of honey and nuts are very popular; lovers of sweets will have a ﬁlled day. The national cuisine of the inhabitants of Altai is incredibly tasty, satisfying, and most importantly - very healthy and natural.

This guide to cuisine and restauraunt in Barnaul is protected by the copyright law. You can re-publish this content with mandatory attribution: direct and active hyperlink to www.orangesmile.com.
Barnaul - guide chapters 1 2 3

City tours, excursions and tickets in Barnaul and surroundings

Searching where to eat - restaurants and cafe on Barnaul map

Cuisine and restaurants in the neighbours of Barnaul

Krasnoyarsk
In Krasnoyarsk, you can find a restaurant of almost any kind, while European restaurants are still more popular among holidaymakers. An attractive one is 15'58 Restaurant with its pleasant interior and rich selection of dishes. Guests will be pleased with reasonable prices, suitable dishes will be found for both the youngest visitors and discerning gourmets. Cosa Nostra invites ... Open »
Astana
In accordance with an old tradition, each meal is started with airan or kumiss. These drinks are not only delicious but also very good for health. Tea is a no less popular drink here. In Kazakhstan, milk is often added to tea. Travelers should not forget to try sweet tea with dried fruit and spices. It’s a fantastic and very refreshing drink. Meat dishes are traditionally ... Open »
Almaty
We should start our story about the peculiarities of the national cuisine of Almaty from the description of its beverages because every meal starts and ends with drinks. Fans of dairy products should certainly try koumiss and ayran. These drinks are not only tasty and refreshing, but also very healthful - true elixirs of youth. Tea is a popular drink in the region. As a rule, ... Open »
Islamabad
For sweet tooths, the capital of Pakistan has prepared many interesting restaurants and cafes, a visit to which will be very exciting. These are Burning Brownie famous for its casual atmosphere and original desserts; Gelato, which is like a magnet for all fans of ice cream; and Hotspot that is often considered the best place to try cakes and patty cakes. Fans of fine cuisine ... Open »

Travel notes on best cuisine and restaurants of Barnaul (Russia) on OrangeSmile.com. Famous recipes and traditional dishes and courses in Barnaul restaurants. Where to eat - our recommendations on popular places in Barnaul, where you can taste delicious meal and also spend a good time with your friends.