Sightseeing in Kerch - what to see. Complete travel guide 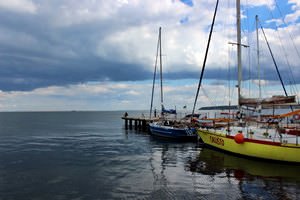 Kerch is considered the most ancient city of Ukraine. It is in the east of the Crimean peninsula, right on the slopes of the ancient Greek Bosporus Cimmeria, which now bears the modern name of the Kerch Strait. The history of the city totals more than 2.5 thousand years and probably, because of this, Kerch is considered one of the most multinational cities of the Crimea. The history of the city began with the founding of an ordinary Greek colony, which was called Panticapaeum. The city developed rapidly, and a lot of different settlements and necropolises arose around it, which are still important sights of Kerch.
Your active city break in Kerch. Attractions, recreation and entertainment - best places to spend your day and night here
Kerch provides its guests with all conditions for an interesting and varied stay. In a warm time, the resort town is visited by a huge number of beach lovers. The most lively and popular …

Open
More than a thousand burial mounds were preserved here, the most famous of which are: Golden, Royal, Yuz-Oba and Melek-Chesmensky. Literally, through several centuries the powerful Panticapaeum and several other cities united in the Bosporan kingdom, the capital of which became Panticapaeum. The kingdom lasted almost a thousand years. Many times these lands fell under the authority of the Roman Empire, but it also happened that the state became independent for several centuries.
Already in the 5th century the tribes of the barbarians finally established their dominion in these territories. The cities were destroyed, the local people were taken into slavery and chaos and devastation reigned in the once-fertile lands. The era of rebirth began after these lands fell under the rule of Byzantium, which restored the ancient city. True, the peaceful existence did not last long. After the emergence of Kievan Rus, the Slavic tribes were interested in these areas, and called it the ancient city of Korchev. Copyright www.orangesmile.com
Cuisine of Kerch for gourmet with top restaurants and cafe
Tatar cuisines are widely represented in Kerch, as the Tatar people have lived on these lands from ancient times. For those who want to get acquainted with the national cuisine, it is worth …

Open
After bloody battles Korchev became one of the key cities of the Tmutarakan principality, which is part of Russia. In the XIV century Genoese came to these lands, and they built a large seaport with shore fortifications. The rule of the Genoese lasted only a hundred years, after which the city was captured by the Turks. Cherzeti, as Kerch was called in those days, became one of the most important cities for the Ottoman Empire. After the end of the Russian-Turkish war, Kerch went under the authority of the Russian Empire. Since then, the city has undergone various stages of development, collapsing, rebuilding and again collapsing. Now it is one of the most popular resort towns of the Crimean coast, where you can have a good rest and get acquainted with the culture of locals. 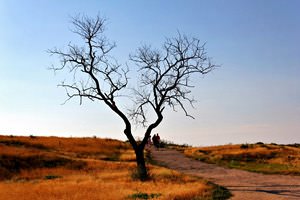 In Kerch, there are a lot of preserved monuments of different epochs. The Yenikale Fortress reminds of the reign of the Ottoman Empire. It was built in the 18th century to protect the strait between the Azov and Black Sea. At the end of the 19th century, the fortress lost its strategic status and was in disrepair. For the years of its existence, the defense constructions have never been reconstructed, so the fortress is partially destroyed now.
Excursion over cultural sights of Kerch - 'must visit' points of interest
Kerch is one of the most ancient cities of Ukraine, and therefore there are many interesting sites that are worth seeing. The city will be interesting especially for those who are fond of …

Open
Near it, there is the historic monument of the later period, the Kerch Fortress. It was built in the 19th century to protect the borders of the Russian Empire. The fortress is located on Cape Ak-Burun. In the first half of the 20th century, the fortress served as an arsenal. This historical monument had been used for the local military units until 2003. Then, the fortress was declared a tourist attraction. Now, it is located in the open-air museum. 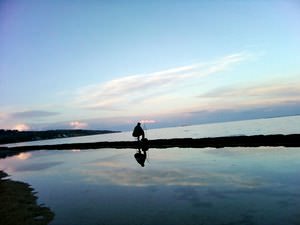 The most remarkable religious monument of Kerch is the Temple of St. John Prodromos. It was built in the 6th century. The church was reconstructed for the first time in the 8th century. Some of its architectural elements are the preserved remains of the first buildings. The temple gained its present design when it was rebuilt in the 10th century. It is still working today. In the temple, you can see interesting old church utensils and the collection of old icons.
Your active city break in Kerch. Attractions, recreation and entertainment - best places to spend your day and night here
Kerch provides its guests with all conditions for an interesting and varied stay. In a warm time, the resort town is visited by a huge number of beach lovers. The most lively and popular …

Open
In the surroundings of the city, there are several unique archeological districts that are available for tours. Those who are interested in ancient history should see the ruins of the ancient Greek city Panticapaeum. It was formed in the 7th century BC. During its heyday, the city was incredibly wealthy. On its territory, there were luxurious temples and palaces. This big city had existed until the 4th century AD. Now, on the territory of the archeological complex, you can see only some fragments of the magnificent constructions. 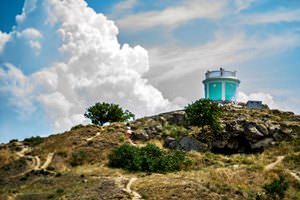 In the city, there is the Historical and Archaeological Museum founded in 1926. The museum lost the significant part of its collection during the Crimean War. Today, you can see here archeological artifacts that were found when the city and its surroundings were explored. The museum stores the collections of old weapons, rite tools, accessories, and household items. In total, the museum houses almost 240 000 exhibits, some of which are aged over 2 000 years.

This guide to iconic landmarks and sights of Kerch is protected by the copyright law. You can re-publish this content with mandatory attribution: direct and active hyperlink to www.orangesmile.com.
Kerch - guide chapters 1 2 3 4

Survived castles around Kerch
♥   Castle 'Yeni-Kale Fortress' , 10.6 km from the center. On the map

Sights around Kerch from our guide 'Extreme places on Earth' 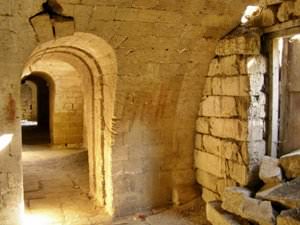 Distance from Kerch center - 5.1 km.
One of the most ancient underpasses is located near the 900-meter Theatre Street. Researchers suppose that it was a part of hydrotechnical system of the Byzantium era, in the 6th century. The main artifacts that were found there are the fragments of the antique marble columns that were used for underground building. Not far from the ancient catacombs has located a modern city waterline of the 19th century. At the moment this system is closed for reconstruction, then in the undergrounds will be open a historical museum. … Read further

Search touristic sites on the map of Kerch

Sightseeing in regions nearby Kerch

Anapa
Under the rule of the Russian Empire, Anapa developed rapidly and confidently. In the middle of the XIX century it received the status of a city and since then began to attract the attention of the Russian nobilities, who preferred to build summer cottages and spend the summer here. When the city became a resort, large-scale construction began in its coastal zone. The city ... Open »
Feodosiya
In Feodosia, there are also several upscale wellness centers that will be perfect places for tourists wanting to improve their health. The enchanting old town is well-developed from a tourist point of view. When walking, travelers can see attractive restaurants, cafes, interesting gift shops and stalls where you can buy a lot of tasty sweets and house wine. In the town, there ... Open »
Koktebel
Many famous people visited Koktebel, but most often the village is associated with the name of Maximilian Voloshin, the famous poet of the Silver Age. The outstanding artist and poet became the soul of Koktebel; it was he who found here the ruins of an ancient settlement. Voloshin loved this place for its pristine and wild beauty. He is buried in Koktebel, at the very top of ... Open »
Novorossiysk
It should be also noted that it is also a hero city that became famous during the war. This means that there are many pilgrimage places for tourists interested in history. The nature of the city surroundings is very fascinating. That is why many travelers prefer to stay not in Novorossiysk but in one of the picturesque districts with the amazing sea, air and sanatoriums. There ... Open »
Sudak
Sudak will definitely impress fans of sports entertainments who can diverse their leisure in different interesting ways in addition to visiting classic beach attractions. Hand-gliding, helicopter flight, romantic cruises and plenty of interesting places for walking and scuba diving... Sudak is not inferior to big Crimean resorts in entertainments. It is just impossible to ... Open »
Gelendzhik
There are three excellent water parks in Gelendzhik, among them the largest water park in the country - "Golden Bay". Another amazing feature of the resort town is the inscription "Gelendzhik" located on Mount Markhot, which is considered to be one of the largest in the world. The symbol of Gelendzhik is the White Bride - as the name of the city is translated from the Turkish ... Open »

All about Kerch, Ukraine - sightseeings, attractions, touristic spots, architecture, history, culture and cuisine. Prepare your trip together with OrangeSmile.com - find out the 'must see' things in Kerch, which places to visit, which excursions to take, where the breathtaking views are waiting for you. Planning your trip with this travel guide will help your to get the most out of Kerch in few days.