Sightseeing in Kutaisi - what to see. Complete travel guide 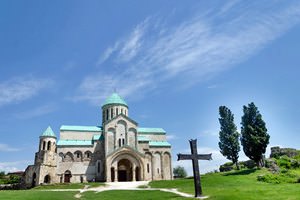 Kutaisi is a beautiful city in west Georgia. It is located on the bank of the Rioni River. The name of this Georgian city derives from the Georgian word “kuato” which means “stone”. Indeed, the city is located in a rocky territory full of stones. Kutaisi is not only a comfortable Georgian resort but also an ancient historic settlement that still has a unique hospitable atmosphere that Georgia is famous for. This city has managed to keep its landmarks in good condition until modern times. These fabulous attractions have impressed and excited generations of guests from all over the world.
Archaeologists proved that the city of Kutaisi was established in the 6th century BC. However, the first mentions in the documents date back to the 3rd century BC. Local people were mostly involved in winemaking. There were also many fruit trees in the region. According to old manuscripts of the antiquity period, Kutaisi was the capital of the ancient Kingdom of Colchis. At that time, the Colchis people mostly inhabited the territory of the modern Georgian city. They were the forefathers of modern Georgians.
In the 8th century, Kutaisi became the central settlement in the Abkhazian Kingdom. In the 60s of the 18th century, Turks attacked the Georgian settlement. They succeeded in capturing the city after a series of fierce battles. Russian troops managed to defeat the Turkish army only ten years later. In 1810, Kutaisi became a part of the Russian Empire and became the center of the Imeretian region. After the launch of the Soviet Georgia, the city started developing and became the second most important industrial center in the country. In 2012, Kutaisi became the parliament capital of the country. Copyright www.orangesmile.com
One of the major architectural and cultural attractions in Georgia is located in Kutaisi, on the Ukimerioni Hill. This is Bagrati Cathedral, also known as the Cathedral of the Dormition. The shrine was constructed at the edge of the 10th and 11th centuries. King Bagrat III ordered to build it, giving his name to the religious landmark. Initially, this was not only a church but also a palace that hosted many important events. David IV or David the Builder, who reunited Georgia, was crowned in this church. After this event, Bagrati Cathedral became the symbol of the united country and Georgian people. 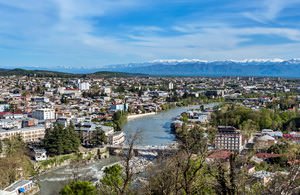 This is a marvelous example of medieval Georgian architecture. Harmonious and elegant proportions make Bagrati Cathedral special. Interesting décor and carved elements decorated the church, and its walls and ceiling had colorful mosaics. An arched portico decorates the entrance to the building. High columns with detailed stuccos make the cathedral uniquely majestic. Inside, Bagrati Cathedral has all traditional elements of a church, such as numerous icons and candle holders.
The Motsameta Monastery is always present in the list of the top attractions in Kutaisi. It is built at the edge of a cliff with the Rioni River flowing below it. The monastery is located approximately six kilometers from the central part of Kutaisi. The building of the sacred complex started after the execution of two Georgian princes, David and Konstantin Mkheidze. The monastery’s name is derived from the word “martyrs”. The two killed men became Georgian saints. The monastery exhibits a vessel with the relics of the princes. 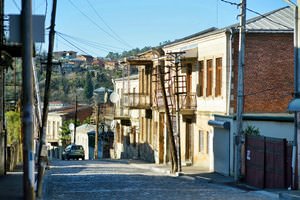 The Motsameta Monastery is undoubtedly a beautiful building. Circular towers with spiked cupolas charmingly adorn the main building. When visiting the monastery, don’t forget to drink a bit of water from the fountain that works inside the complex. According to local beliefs, this water can cure many diseases, both physical and spiritual. In modern times, the monastery is the center of an annual holiday called Motsametoba. It is celebrated on the 15th in the second month of autumn. The main purpose of this holiday is to remember Saint David and Konstantin.
Are you searching for a suitable place to stay with your children? Central City Park in Kutaisi is the most suitable place for this. There is an interesting way to get to the park – by cable car from the left bank of the Rioni. There is a special entrance for pedestrians in the north of the park. This is a charming place with many amusements and merry-go-rounds for kids. Adults will find it exciting to see the area from the Ferris wheel. 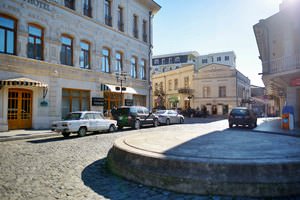 Kutaisi has an airport that serves flights from many countries of the world. However, when planning a vacation in Kutaisi, tourists need to keep in mind that the number of flights to Kutaisi is not big. It is easier to reach Tbilisi first. After that, continue your journey on a train to Kutaisi. The journey time is roughly six hours. Besides trains, there are buses to Kutaisi. They reach the city in west Georgia faster – in just four hours.
This guide to iconic landmarks and sights of Kutaisi is protected by the copyright law. You can re-publish this content with mandatory attribution: direct and active hyperlink to www.orangesmile.com.

City tours, excursions and tickets in Kutaisi and surroundings

National and city parks around Kutaisi
♥   National Park 'Alania' , 104.5 km from the center. On the map

Sights around Kutaisi from our guide 'Extreme places on Earth' 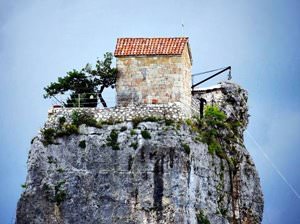 Distance from Kutaisi center - 40.8 km.
The group of climbers made it possible to conquer the unbearable 40-meter structure only in 1944. They first found ruins of the ancient temple atop of the pillar. For several years, an archaeological research was conducted on top of the monolith and at its surrounding area. Many amazing artifacts as well as the remains of an unknown monk were discovered during that time. Several years ago, the temple on the mount was rebuilt. Today that’s an important place of pilgrimage and a major attraction in the region. During construction of a new temple ruins of former buildings were used. The temple was named after St. Maximus the Confessor. Now everyone can climb there using a specially set hanging ladder. … Read further

Travellers, who like mountain rest, will enjoy their visit to the Caucasus Mountains and beautiful Mount Kazbeg (5,030m). The most famous destinations of the region are Kazbegi town, Gudauri (a popular ski resort) and the beautiful Khada Valley. Hospitality is traditional in Georgia, so travelers will feel very welcome. Tsminda Sameba is considered a true gem of Kazbegi. This ancient Georgian church is built on a hilltop, from which one can see stunning views of the mountains and the valley. … Open 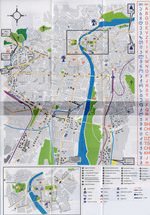 Search touristic sites on the map of Kutaisi

Sightseeing in regions nearby Kutaisi

Batumi
In Batumi surprisingly, two almost opposite architectural styles are combined: Asian and European. There are especially beautiful buildings of the colonial era, whose illumination in the evening looks even more spectacular than at the height of a sunny day. The history of the city dates back to the times of Ancient Greece, when this place was called Kolkhida, and Batumi ... Open »
Nalchik
This attracted more people to the settlement. They started to settle in the quarters divided according to the ethnicity. Mountain Jews preferred to live in a separate settlement that was a part of the large industrial village but was quite isolated. Not far from Nalchik, there was a big German settlement that had a serious impact on its culture. In the late 19th century, there ... Open »
Mtskheta
Mtskheta is located twenty kilometers from Tbilisi – the capital city has an international airport with multiple flights from Europe and Asia. It is not hard to get to Mtskheta from Tbilisi. Fixed route minibusses depart to the historical city from the capital’s central bus station. The time in transit is only twenty-five minutes. It is also possible to reach Mtskheta by ... Open »
Tbilisi
Today, the old complex of baths is one of the main symbols of the city. Many travelers successfully combine sightseeing tours with pleasant and useful procedures. The important distinctive feature of modern Tbilisi is an amazing contrast. Near picturesque old constructions, there are high beautiful modern buildings. The citizens keeping up with the times honor the traditions ... Open »
Gyumri
After a long day full of adventures in Gyumri, it is particularly pleasant to walk in the central park. This is a comfortable recreation area with many various amusements. The park remains a cool place even on hot days because of tall and old trees. The green Armenian “oasis” was founded in the 20s of the previous century. An interesting fact – there was a cemetery on ... Open »
Yessentuki
At the end of the 20th century, Yessentuki became the largest mineral water resort in the country. Here, new sanatoriums were built and the old ones were repaired, the infrastructure was also developed. Nowadays Yessentuki is a rather visited resort, most of the guests come for relaxation with the sole purpose of improving their health. To call the resort noisy and young is ... Open »

All about Kutaisi, Georgia - sightseeings, attractions, touristic spots, architecture, history, culture and cuisine. Prepare your trip together with OrangeSmile.com - find out the 'must see' things in Kutaisi, which places to visit, which excursions to take, where the breathtaking views are waiting for you. Planning your trip with this travel guide will help your to get the most out of Kutaisi in few days.