Sightseeing in Mtskheta - what to see. Complete travel guide 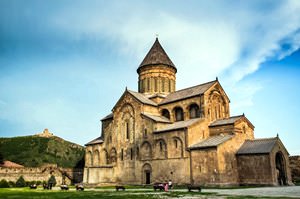 In the past, the Georgian city of Mtskheta was the capital of the country. Nowadays, this settlement occupies a special place in the heart of every Georgian. Mtskheta is famous for its numerous sacred places and cultural attractions. Perhaps, no other city in Georgia has as many memorial places and shrines. Pilgrims and tourist groups from all over the world visit this city every year to see the “second Jerusalem” with their own eyes. Svetitskhoveli Cathedral and Jvari Monastery are the most precious attractions that the city can offer to its guests.
The oldest city in Georgia was founded in the 5th century BC. According to a legend, Mtskhetos was the founder of the settlement, and this is how the city got its name. One hundred years later, Mtskheta became the capital of the early Georgian kingdom of Iberia. This was the period of development and prosperity for the region. However, the golden age for the settlement ended at the end of the 5th century when it was decided to move the capital to Tbilisi. Despite this drastic change, Mtskheta continued developing and remained one of the major centers of religion in Georgia.
For many years, the city was the residence of Georgian Catholicoi – the heads of the country’s church. In the Middle Ages, Mtskheta turned into an important center of trade, religion, and manufacturing. In 736, the Arabians and their leader Mervan attacked Mtskheta, causing much damage to the settlement. After that, the city lost its importance and turned into a small Georgian village, which stopped developing for many centuries. The second golden age of Mtskheta started only during the Soviet period. New factories appeared in the region, expanding the territory of the city and bringing more people to Mtskheta. Copyright www.orangesmile.com
Would you like to see the main Georgian shrine? In Mtskheta, tourists can visit Svetitskhoveli Cathedral that belongs to the Georgian Orthodox Church. This church, which is a UNESCO World Heritage Site, is also the second-largest in the country. Svetitskhoveli Cathedral was built in the 11th century. Since that time, this majestic building with beautiful facades, decorative carved arcs, and giant cupolas has been the symbol of worship and respect for the twelve Christian apostles. Initially, there was one of the oldest churches in Georgia on the site of the cathedral. 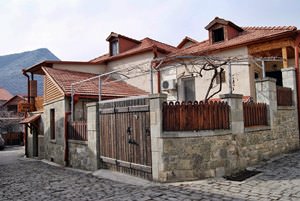 Local legends say that Saint Sidonia was buried on the site of the cathedral, and the first church was built in her name. However, that church was destroyed. All attempts to rebuild the church weren’t successful, as if some mysterious power was continuously ruining the restoration plans. Soon, the city’s authorities stopped all attempts to rebuild the church and decided to construct a new cathedral instead. It took several decades to construct Svetitskhoveli Cathedral. Nowadays, the sacred Orthodox Christian cathedral is active and hosts the divine service.
The oldest monastery – Jvari – is built on a mountain top at the confluence of two rivers – the Mtkvari and Aragvi. This ancient monastery is also a UNESCO World Heritage Site. If we translate the name of this monastery from Georgian, Jvari means “Cross”. In the 4th century, Saint Nino erected a wooden cross on the mountain. This cross was the symbol of Christianity that defeated paganism. According to local legends, the wooden cross could cure different diseases, including serious ones. The news about the healing abilities of the cross spread, attracting numerous pilgrims to Mtskheta. 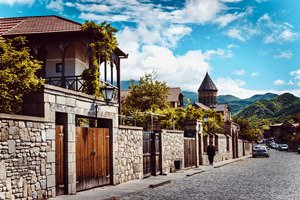 Several centuries later, a small church was built here. The church had a tetraconch shape, and its construction resembled a long cross with semi-circular apses on the ends. The former symbol of Christianity remained untouched – the church was built in a way so that the Nino’s cross would appear in the center of the shrine. Several centuries later, a monastery was built near the church. This monastery became an important religious center in Georgia. Nowadays, the famous monastery is open for visitors and foreign guests, many of which come to tie a ribbon to the tree of wishes.
Mtskheta is located twenty kilometers from Tbilisi – the capital city has an international airport with multiple flights from Europe and Asia. It is not hard to get to Mtskheta from Tbilisi. Fixed route minibusses depart to the historical city from the capital’s central bus station. The time in transit is only twenty-five minutes. It is also possible to reach Mtskheta by trains that go to Batumi, Poti, and Zugdidi. Almost each of them makes a stop in Mtskheta. Tourists can reach the city center from the station on foot or in a taxi.
This guide to iconic landmarks and sights of Mtskheta is protected by the copyright law. You can re-publish this content with mandatory attribution: direct and active hyperlink to www.orangesmile.com.

City tours, excursions and tickets in Mtskheta and surroundings

Survived castles around Mtskheta
♥   Castle 'Berdavan Fortress' , 75.5 km from the center. On the map

National and city parks around Mtskheta
♥   National Park 'Dilijan' , 117.5 km from the center. On the map

Sights around Mtskheta from our guide 'Extreme places on Earth' 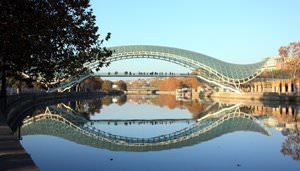 Distance from Mtskheta center - 18.4 km.
At first glance, it may seem that the tiny lights are shimmering chaotically. In reality, they send an important message with Morse alphabet. The message contains the names of the main elements of which the human body consists. The bridge was opened in 2010. The initiator of the construction was the President of the country, Micheil Saakashvili. On the picturesque bridge you can even walk in the bad weather and enjoy the panorama on the river. The canopy protects safely from any storm. … Read further

Travellers, who like hiking, cycling and walking, are recommended to visit Pankisi Gorge. This is a northern region of Georgia located in the central part of the High Caucasus. During a walk there, you will see the remains of old fortifications, ancient churches and other ruins. Don’t leave Georgia without visiting its capital and largest city – Tbilisi. Here you can make a tour in the Old Town, enjoy the beauty of Tbilisi Sameba Cathedral, visit Freedom Square and Metheki Church, observe old Narikala Fortress and see panoramic views of the city near Mother Georgia statue. … Open

Search touristic sites on the map of Mtskheta

Sightseeing in regions nearby Mtskheta

Tbilisi
The most popular souvenirs here are national costumes and incredibly beautiful (mostly decorative) daggers. In the city, there are interesting flea markets where you can but interesting pieces of art and antique items. The entertainment industry of Tbilisi is developing from year to year. Today, there are several big shopping malls in the city where you can spend the whole day ... Open »
Gyumri
After a long day full of adventures in Gyumri, it is particularly pleasant to walk in the central park. This is a comfortable recreation area with many various amusements. The park remains a cool place even on hot days because of tall and old trees. The green Armenian “oasis” was founded in the 20s of the previous century. An interesting fact – there was a cemetery on ... Open »
Kutaisi
The Motsameta Monastery is undoubtedly a beautiful building. Circular towers with spiked cupolas charmingly adorn the main building. When visiting the monastery, don’t forget to drink a bit of water from the fountain that works inside the complex. According to local beliefs, this water can cure many diseases, both physical and spiritual. In modern times, the monastery is ... Open »
Yerevan
The National Museum of Armenia will get you acquainted with history of Erevan. The museum was opened in 1921. Art connoisseurs should move their feet to the Square of Republic where they will find the state picture gallery. The square is a frequent location of multiple exhibitions and fair-trades, where young talents demonstrate their works. Museum of History of Erevan is one ... Open »
Nalchik
Only 82 families lived in the settlement but then the settlement grew. It often changed because soldiers returned to their native lands after the military service. In 1862, the ordinary military settlement became a large industrial village. The population of the fortress and nearby settlements was exempted from the national service obligation. This attracted more people to ... Open »
Batumi
The old city is also beautiful and unique; it has remained unchanged for about 150 years. It is very easy to feel the spirit of the past centuries. On each street you can find cozy cafes, where an amazing coffee is prepared, the fragrance of which is imbued with the whole Old Town. In the historical area there are many handicraft shops with products made by hand, tourists ... Open »

All about Mtskheta, Georgia - sightseeings, attractions, touristic spots, architecture, history, culture and cuisine. Prepare your trip together with OrangeSmile.com - find out the 'must see' things in Mtskheta, which places to visit, which excursions to take, where the breathtaking views are waiting for you. Planning your trip with this travel guide will help your to get the most out of Mtskheta in few days.