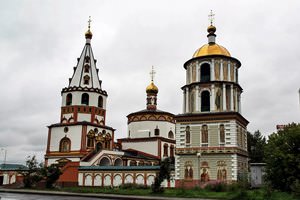 Irkutsk is considered the capital of Eastern Siberia. It is a beautiful city with a unique historical heritage and inherent features of modern cities. Around Irkutsk there are many picturesque birch groves, beautiful meadows and unique natural objects. The territory of the city is divided into five administrative districts, each of which has its own characteristics. Kirovsky district is considered to be central; it is the historical center of the city. Here there is a variety of monuments of architecture, museums, theaters and libraries, as well as beautiful modern buildings.
Your active city break in Irkutsk. Attractions, recreation and entertainment - best places to spend your day and night here
All who come to rest in Irkutsk are waited for by amazing adventures. The neighborhood of the city, especially near Baikal, is surprisingly beautiful. Here is a chic nature, because of which …

Open
The most ancient monument of Irkutsk is the church in the name of the Savior of the Holy Face. Now this religious institution is converted into a museum, where a rich exposition is presented, which is dedicated to the Irkutsk diocese. In the style of the Siberian Baroque, a cathedral was built in the name of the Epiphany of the Lord. Its construction lasted almost 28 years, and the first stone was laid as far back as 1718.
Another important architectural monument is the building of the Irkutsk Local History Museum, built in the Moorish style. The museum stores more than 350 thousand exhibits devoted to the history of Siberia. Moreover, 250,000 finds are rarities, similar to which one will not be able to see in any other museum in the world. The museum stores unique collections of clothing, skillful embroideries, ancient manuscripts, historical documents and reports of geological expeditions. Copyright www.orangesmile.com
Guide to Irkutsk sightseeing - things to see and to visit
Irkutsk was founded about 300 years ago. During this period, it managed to accumulate a lot of beautiful architectural monuments, which attracts a significant part of modern travelers. The …

Open
If you wish to appreciate the monuments of wooden architecture, it will be interesting to see the "Shastin house" which is often called a "lace house". It is decorated with carvings, wooden turrets, figured columns and other elements of decor that make its image unique. Since ancient times, local people have decorated the wooden houses with carvings; this custom has remained since the time of paganism. In those days it was believed that the ornament and patterns is a kind of magic symbols and amulets that protect the owner and his family from trouble. The buildings of the Drama Theater and the Museum of Decembrists also strike with their beauty, and fans of painting should definitely include in the program of leisure a visit to the Art Museum named after V.P. Sukachev. The pictures presented in it were bought by the city's head in St. Petersburg in the early 20th century. He entrusted the entire rich collection to the city.

In the section below, you can get one of our excursion, activities or city discovery tours over Irkutsk and surroundings. Our website offers 10-30% lower ticket prices, when compared to the offline purchase on the spot.

This guide to cultural sights Irkutsk is protected by the copyright law. You can re-publish this content with mandatory attribution: direct and active hyperlink to www.orangesmile.com.
Irkutsk - guide chapters 1 2 3 4
Car rental on OrangeSmile.com

Photogallery of cultural heritage of Irkutsk

Excursions over cultural sights of neighbours of Irkutsk

Krasnoyarsk
Connoisseurs of painting would be interested in visiting The Surikov Art Museum that occupies a beautiful historical building. One of the largest museums in Siberia has a rich collection of more than 14 thousand exhibits. To further your acquaintance with the great Russian artist, you can go on a tour of the museum-estate of Surikov. The artist spent his childhood and ... Open »
Beijing
Beihai Park is surely the best place for hiking and outdoor recreation activities. This park is located in the heart of the city. The park was founded around the lake with the same name a thousand years ago. In this beautiful garden on the lake often had rest emperors of the country. Today you still can see some beautiful government buildings in this park apart from old trees ... Open »

Culture guide to Irkutsk. Which fascinating sights to visit once you are in Irkutsk: temples, churches, museums, theaters and castles. Recommendations (with addresses, phone numbers and links) on the places 'must visit' in Irkutsk. Plan your own city excursion by using this page info!