Cuisine of Irkutsk for gourmets. Places for dinner - best restaurants 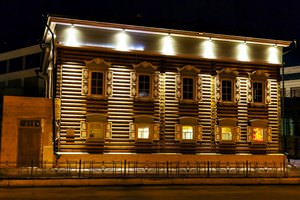 The indigenous population of the Irkutsk lands is the Buryats; they directly influenced the formation of modern culinary traditions of the city. In Irkutsk, even now, many dishes that indigenous people prepared hundreds of years ago are still popular. In the 17th century, Buryat cuisine underwent some changes, as Russians came to these lands. Russian Buryats borrowed many flour and vegetable dishes, which perfectly complemented their monotonous meat and milk diet.
Guide to Irkutsk sightseeing - things to see and to visit
Irkutsk was founded about 300 years ago. During this period, it managed to accumulate a lot of beautiful architectural monuments, which attracts a significant part of modern travelers. The …

Open
Buryats lived in harsh conditions, and therefore their cuisine is also very simple and harsh. They appreciate natural food, and, of course have respect for food. Like many years ago, meat dishes are considered true national treats. In modern restaurants in Irkutsk, guests are offered a huge selection of meat treats, but before, indigenous people could enjoy a certain type of meat only in a certain season. In the summer, it was accepted to eat only the meat of a young lamb, autumn horse meat, in winter beef, and in spring the basis of nutrition was the meat of wild animals.
The most famous and most delicious dish of Buryat cuisine is bouzas. In appearance, they somehow resemble classic Russian dumplings, but the taste of the dish is completely different. The fact is that the bouzas are not boiled, but cooked for a couple of boiling fat in a large closed pan. Thus, inside the pouch of the dough an incredibly tasty and aromatic broth is formed. The name of the dish from Buryat is translated as "meat wrapped in dough". For mincemeat, pork and beef are used most often. It is interesting that the shape of this dish resembles a national Buryat dwelling - a yurt. Copyright www.orangesmile.com
Excursion over cultural sights of Irkutsk - 'must visit' points of interest
Irkutsk is considered the capital of Eastern Siberia. It is a beautiful city with a unique historical heritage and inherent features of modern cities. Around Irkutsk there are many …

Open
An important place in the kitchen of the Buryats is occupied by dairy products; it is with them that a holiday here begins. If the Russians meet guests with bread and salt, then the Buryats do so with products from milk. Fans of fragrant tea should take into account that here it is also drunk with milk. Any Buryat holiday without salomat is not a holiday; this dish has also been in demand for many centuries. It is prepared quite simply: on a very slow fire boil sour cream, stirring it with a spoon, then begin to slowly pour flour into it, stirring the mass more intensively. When a ruddy crust appears on the bottom of the cast iron boiler and along its sides, the dish is considered ready. Salomat is a very nutritious and incredibly tasty dish; it is served on a table in special bowls.

This guide to cuisine and restauraunt in Irkutsk is protected by the copyright law. You can re-publish this content with mandatory attribution: direct and active hyperlink to www.orangesmile.com.
Irkutsk - guide chapters 1 2 3 4

Searching where to eat - restaurants and cafe on Irkutsk map

Cuisine and restaurants in the neighbours of Irkutsk

Krasnoyarsk
In Krasnoyarsk, you can find a restaurant of almost any kind, while European restaurants are still more popular among holidaymakers. An attractive one is 15'58 Restaurant with its pleasant interior and rich selection of dishes. Guests will be pleased with reasonable prices, suitable dishes will be found for both the youngest visitors and discerning gourmets. Cosa Nostra invites ... Open »
Beijing
You will find restaurants for every taste and budget in Beijing. There is nothing strange in this as this city is one of the most popular holiday destinations for travelers who seek new culinary experiences. The most demanding gourmets are delighted to try oriental delicacies. Fans of European cuisine will be pleasantly surprised by the skills of local chefs. Quan Ju De ... Open »

Travel notes on best cuisine and restaurants of Irkutsk (Russia) on OrangeSmile.com. Famous recipes and traditional dishes and courses in Irkutsk restaurants. Where to eat - our recommendations on popular places in Irkutsk, where you can taste delicious meal and also spend a good time with your friends.