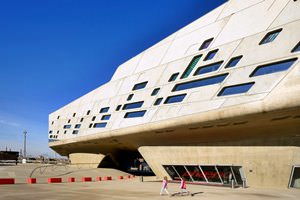 Wolfsburg is known as a major industrial center with Volkswagen's largest manufacturing plant as its main attraction. Guided tours of the plant are organized for all comers. Curious visitors can see the main manufacturing department, as well as the world's largest car assembly line. The length of the line reaches 9 kilometers, and since the plant occupies a large area, tours of the object are held on buses.
Your active city break in Wolfsburg. Attractions, recreation and entertainment - best places to spend your day and night here
The famous Autostadt Amusement Park opened in 2000 remains one of the tourists' most favorite leisure zones. The theme park is located on the territory of the Volkswagen automobile plant and …

Open
Porschestraße is considered the main city street, which is perfect for walking. Along it, there are numerous shops and lots of interesting modern architectural monuments. The city is also famous for its natural attractions - there are more than thirty lakes and rivers alone within its limits. Guests of the city must see the Mittelland Canal, along which the famous automobile plant is based. This is one of the most beautiful places in the city with its own marina.
Among architectural attractions, we cannot ignore the Wolfsburg Castle, a beautiful elegant building surrounded by a picturesque park area. The castle is especially beautiful in the summer when beautiful floral compositions are planted on its territory. The courtyard of the castle hosts all kinds of national holidays. Thus, fans of mulled wine and traditional treats gather here before Christmas. Copyright www.orangesmile.com
Advices to travellers: what you should know while being in Wolfsburg
1. Currency exchange is quite problematic in the city. Exchange offices in banks are quite rare. They can be found near the railway station or at the airport, but it's still best to exchange …

Open
Among the religious attractions of interest is St. Anne's Church dating back to the 13th century. Later the building was repeatedly rebuilt, but the oldest part of the church has survived to this day. Next to the church is an old cemetery where you can see a lot of beautiful monuments and memorials. Travelers would probably be interested to stroll through the picturesque town of Rothenfelde. A few hundred years ago it was an independent settlement, and today it is part of Wolfsburg. Its main attraction of is a huge stone with a memorial inscription about the War Of Liberation against the Napoleonic coalition carved on it. 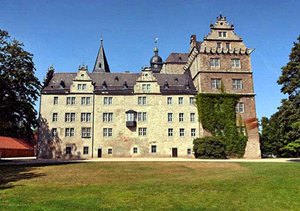 Outdoor recreation enthusiasts will be happy to explore the Stadtwald Park, which is a short drive from the city. It offers a variety of tours, during which you can see rare eagle owls, the inhabitants of these places. There is also a recreation area in the park where you can set up a camp with a tent and barbecue facilities.

In the section below, you can get one of our excursion, activities or city discovery tours over Wolfsburg and surroundings. Our website offers 10-30% lower ticket prices, when compared to the offline purchase on the spot.

This guide to cultural sights Wolfsburg is protected by the copyright law. You can re-publish this content with mandatory attribution: direct and active hyperlink to www.orangesmile.com.
Wolfsburg - guide chapters 1 2 3 4 5 6 7 8 9 10 11
Reference information
Map of all art museums

Art galleries in Wolfsburg and around
♥   Art museum 'Herzog Anton Ulrich Museum' Braunschweig, 24.8 km from the center. On the map

Unique spots in Wolfsburg and near

Distance from Wolfsburg center - 65.2 km.
Lush forests covering the banks of the canal, charming ancient bridges and crossings form a harmonious sightseeing complex which is interesting to explore. The construction works were started in 1906, during the Second World War the pace of work was reduced to a minimum. Although the first section of the canal was opened for navigation in 1915, the construction was far from finished. … Read further

Photogallery of cultural heritage of Wolfsburg

Excursions over cultural sights of neighbours of Wolfsburg

Braunschweig
fans of theater should definitely visit one of the city's theaters. State Theatre of Braunschweig is considered the most famous theatre of the city. Each year the theater hosts a few dozen of unforgettable premieres. Classical music lovers will enjoy watching concerts, which take place in Volkswagen Halle and Stadthalle centers. They are also the permanent venue of numerous ... Open »
Celle
One should see the building of the Old Town Hall founded back in 1292. Many centuries ago, it was located in the center of the most vibrant and scenic market square of the town. No less imposing is the beautiful building of New Town Hall; the length of this brick building is more than 180 meters. The building is constructed in neo-Gothic style; nearby is a very beautiful ... Open »
Magdeburg
Among the present day samples of architecture the Millennium Tower Jahrtausendturm is worth noticing. It is located on the territory of the beautiful parkland. The original conic construction of unique architectural shape looks rather impressive on the background of green lands and flowerbeds. Among the religious sights of Magdeburg the Saint John Church Johanniskirche built ... Open »
Hannover
Start your observation of the city's attractions from making a visit to the New Town Hall (Neues Rathaus), the construction of which lasted for 12 years and was completed in 1913. Nowadays several halls of the town hall have been converted into a museum, the main exhibits of which are miniature models of the city. Visitors of the museum can see how the city looked right after ... Open »
Dessau
Parkanlage Worlitz is widely known as a sight of international importance. The creation of the park started yet in the beginning of the 18th century. The park is designed in the classic English style and is considered one of the most beautiful parks in the world. The territory of the park is the location of an ancient palace which is widely known as the first architectural ... Open »
Lemgo
Walking along Lemgo's central streets, one can admire magnificent Renaissance buildings that once belonged to wealthy merchants. Neustädter Twins is considered the most beautiful half-timbered house among those that have been preserved here. One of the most interesting historic streets is Mittelstraße, which begins near the old market square. This street is one of the ... Open »

Culture guide to Wolfsburg. Which fascinating sights to visit once you are in Wolfsburg: temples, churches, museums, theaters and castles. Recommendations (with addresses, phone numbers and links) on the places 'must visit' in Wolfsburg. Plan your own city excursion by using this page info!