Detailed hi-res maps of Trier for download or print 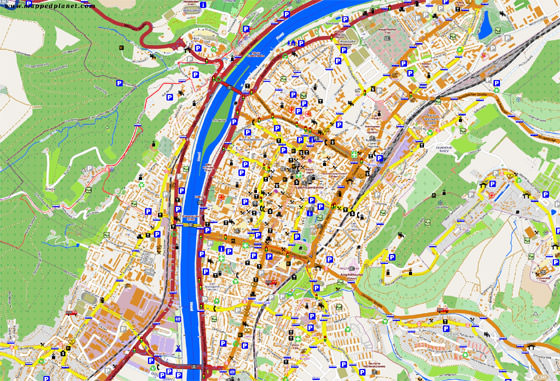 The actual dimensions of the Trier map are 1750 X 1190 pixels, file size (in bytes) - 1341792. You can open this downloadable and printable map of Trier by clicking on the map itself or via this link: Open the map. 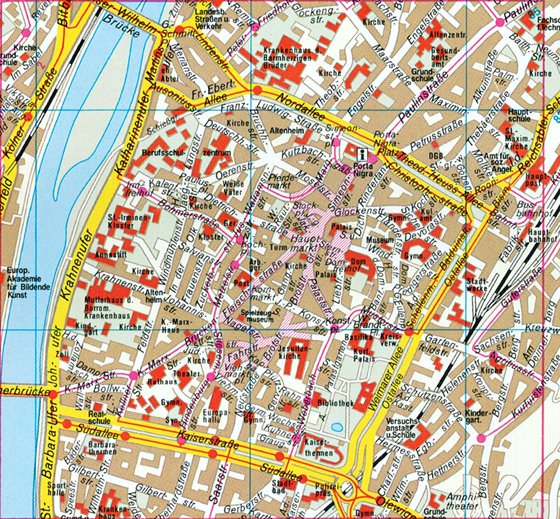 Search for services, infrastructure and sights on map of Trier

Our guide chapters over Trier

The Amphitheatre.
The oldest Roman building in Trier, the Amphitheater , is located in Olewiger Strasse. It was built in 100 AD from limestone. However, in the Middle Ages the amphitheater was used primarily as a quarry, where locals got the material for construction of their buildings. That is why only small remnants of the amphitheater have survived till our days. However, even these … Open

Fans of luxury are recommended to pay attention to Mercure Hotel Trier Porta Nigra that is open just a few steps away from the Porta Nigra gate – one of the main landmarks in Trier. The luxurious hotel has its own casino, Spielbank Trier, as well as an up-to-date gym and sauna. In order to help guests feel even more entertained, the hotel’s infrastructure includes the charming Vis à Vis cocktail bar. … Open

Trier for children - what to visit

When you're in the mood for some outdoor pastime and activities, it’s high time to visit Krahnenufer Park. It is located on the bank of the Mosel River not far from the waterfront. The park is a miraculously beautiful place that is smothered in lush greenery and flowers in summer. Children can walk in the park and enjoy various activities, such as duck feeding. Fans of walking will be pleased to find some … Open

The design of Stadthotel Handelshof is also incredibly harmonious and thought out to the last detail. Minimalist style reigns in all guest rooms that come with large dark wooden beds with crisp white bed clothing. In some guest rooms, walls are painted crimson, and in some, colorful curtains in deep blue and turquoise make the place look cheerful and lovely. The décor of bathrooms is worth a separate mention as it … Open

When describing specialty stores, it’s impossible to fail to mention Rituals that offers a wide range of skincare cosmetics. Rituals offers cosmetics for adults and children including organic soap, shampoo, creams, and much more. It’s a great place to buy amazing gifts for friends and family. Toiletries, premium bath towels – the choice of items for sale is really diverse. There are many outlets with … Open

Hotels with history of Trier

Casa Verde hotel is open in an old brick building with large windows. Inside, travelers will find 12 comfortable guest rooms. All of them are made in the individual style and feature creative accessories in retro style. One guest room comes with elegant woven furniture, and another one has a giant bed with high wooden columns. All guest rooms are decorated with flower bouquets and paintings in the Mediterranean … Open