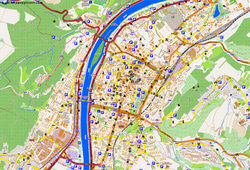 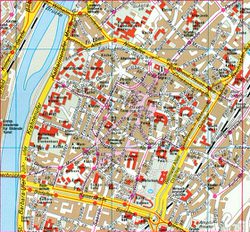 Interactive maps of hiking and biking routes around Trier

1. You can zoom in/out using your mouse wheel, as well as move the map of Trier with your mouse.
2. This interactive map presents two modes: 'Biking Routes' and 'Hiking Routes'. Use the '+' button on the map to switch between them.

This Trier map has two modes: 'Railway Network' and 'Landscape & Rural Map'. Use the '+' button on the map to navigate.

Our guide to Trier

Festivals and events in Trier

Trier is worth visiting during the Christmas holiday when the city turns into a magical fairy tale from the kids' books. The traditional Christmas Fair has been held annually in the Old Town since the end of November until Christmas. Here you will enjoy various festively decorated wooden house-shops, opened in the Market Square and in the courtyard of the Cathedral. In these tents, you will be offered to purchase … Open

The charming Eurener Hof amazes at the first glance. It’s an elegant place with the atmosphere that is perfect for a romantic vacation. The hotel is open in an old two-storey building, the façade of which is decorated with flowers during warm months. All guest rooms are very romantic and come with light wooden décor and pastel textiles. The charming restaurant of the hotel is a paragon of retro style. It … Open

Like feeding birds in the parks? No worries, in Trier you will have such an occasion in the Nels Lankden park. Here live very beautiful inhabitants, who are not afraid of people - swans and ducks. Getting to know them will bring you a lot of positive impressions. Moreover, these birds enjoy walking with people along the lakeshore. If you are looking for the place where you can take nice photos, check for the rosary … Open

3. Evening entertainments are not common among the indigenous people. Fans of entertainments are recommended to go to a nightclub or a disco. It is prohibited to make noise in houses after 21:00. 4. While communicating with locals, it’s not recommended to use active body language. When you speak to someone, call that person by his/her last name. Only close friends and relatives can call … Open

Hotels with history of Trier

Casa Verde hotel is open in an old brick building with large windows. Inside, travelers will find 12 comfortable guest rooms. All of them are made in the individual style and feature creative accessories in retro style. One guest room comes with elegant woven furniture, and another one has a giant bed with high wooden columns. All guest rooms are decorated with flower bouquets and paintings in the Mediterranean … Open

Trier has been always famous because of quality porcelain, so no wonder why the flagship shop has become a true landmark of the city. This shop simply strikes visitors with the variety of items for sale. Affordable prices are another advantage – it’s possible to buy amazing porcelain items for just 2 euro. Travelers, who enjoy visiting unusual shops, should not forget to visit Neustrasse. This … Open