Detailed hi-res maps of Echternach for download or print 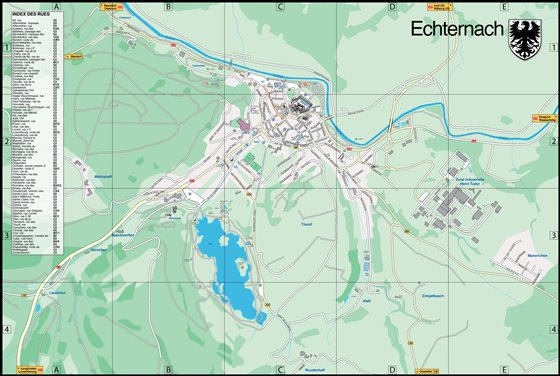 The actual dimensions of the Echternach map are 4134 X 2776 pixels, file size (in bytes) - 1756653. You can open this downloadable and printable map of Echternach by clicking on the map itself or via this link: Open the map.

Moving around in Luxemburg - transportation

The air transport network is also developed in the country. Luxembourg Findel Airport is located 5 kilometers east of the Capital. It is the main air harbor of the country. The airport makes more than 800 flights a week and connects Luxembourg with many European cities. In addition to buses, you can reach the airport by taxi, as well as by your car, which you can leave on any one of the four levels of underground parking. Also, taxis run all over the country. You can request for a taxi by calling the dispatcher, or by using special parking for taxis. The network of automobile roads with high-grade coverage is about thirty thousand kilometers. This includes even the most remote corners of Luxembourg. The cars used in Luxembourg are right hand driven, and the speed limit is 60 km/h in residential areas, 90 km/h outside them, and 120 km/h on the motorways. In Luxembourg, there is no direct access to the sea, but along the Moselle River there is a water connection with neighboring countries and the North Sea. Tourists also travel on the Sauer River for sightseeing. … Open

Luxembourg despite its modest territorial size is considered a highly developed country and is included in the top rating of the richest countries in Europe. The main source of GDP comes from profits from the service, trade, and financial sectors. The financial well-being of the population is also due to the fact that more than half of all able-bodied citizens are engaged in the main sectors of the Luxembourg economy. In the middle of the last century, the most important branch of industry in Luxembourg was ferrous metallurgy. This was due to the discovery of many deposits containing huge reserves of iron ore. Based on this, the steel industry flourished. However, by the end of the last century this sector ceased to exist and the most recent blast furnace was shut down. … Open

Search for services, infrastructure and sights on map of Echternach

Our guide chapters over Echternach

The Market Square is an important historical landmark in Echternach. This square was always crowded because numerous merchants were coming to sell their goods, jugglers performed in front of the public, and traveling musicians appeared from time to time to entertain locals with their marvelous shows. However, the Cross of Justice has always been the main symbol of the square. The name of the cross is not random. In … Open

Maps of Trier
Trier is worth visiting during the Christmas holiday when the city turns into a magical fairy tale from the kids' books. The traditional Christmas Fair has been held annually in the Old Town since the end of November until Christmas. Here you will enjoy various festively decorated wooden house-shops, opened in the Market Square and in the courtyard of the Cathedral. In these ... Open »
Maps of Luxembourg
The most popular, important and honored holiday for all the country is held on June 23 - the Grand Duke's birthday. Various cool entertainments like fairs, open-air concerts can be enjoyed here. Moreover, in the line of the Grand Ducal Palace there is a torchlight procession, and in the evening you can admire the salute. In the second weekend of August, the city hosts a ... Open »
Maps of Koblenz
In July, the city hosts the Farbrausch Festival, which always attracts many young tourists. The event is dedicated to sports and modern electronic music. Its program includes sports competitions and demonstration performances of athletes accompanied by themed music. Venues for sports programs are set in city parks and squares where all comers can watch performances of ... Open »
Maps of Kaiserslautern
The population of the city deserves a mention. Approximately a hundred thousand people live in Kaiserslautern, with Europeans being the majority. Additionally, roughly fifty thousand NATO soldiers live in the city and its neighborhoods. There is an explanation to this fact – in the 50s of the previous century, Kaiserslautern became the largest military base of the United ... Open »
Maps of Aachen
Aachen becomes very attractive for tourists during the preparation for Christmas. It is believed that Christmas fairs in this city are the most beautiful in Germany. Every year the squares and streets around the Aachen cathedral, which became the first object of UNESCO's world cultural heritage in Germany, turn into a festive paradise filled with the sounds of Christmas ... Open »
Maps of Liege
Les Epicuriales is the name of another beautiful open-air festival in Liege. In early June, Parc de La Boverie turns into a real gourmet paradise, as visitors can enjoy all possible gastronomic activities: tasting dishes, participating in workshops, chef competitions, picnicking. No less popular with locals and tourists is the Summer BeerLovers' Festival taking place in early ... Open »
Maps of Bonn
Beethoven's hometown offers many other interesting festivals. It's no wonder that a festival dedicated to the most famous native of the city is held here as well. Beethovenfest begins in early September and ends in early October. It's a kind of tribute to the great composer who was lucky enough to be born in Bonn. The festival has several venues such as Bundeskunsthalle, ... Open »
OrangeSmile.com - online travel reservation expert providing reliable car rental and hotel booking services. We feature more than 25.000 destinations with 12.000 rental offices and 200.000 hotels worldwide.
Secure Server