Detailed hi-res maps of Kaiserslautern for download or print 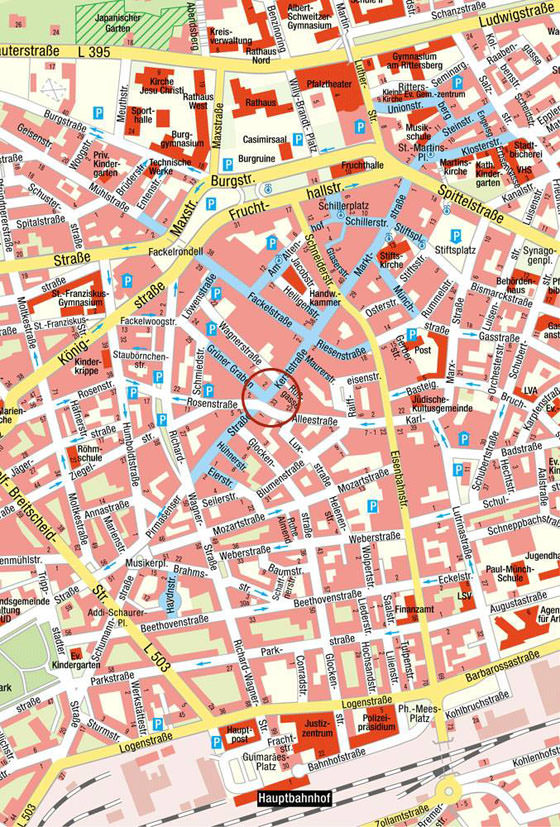 The actual dimensions of the Kaiserslautern map are 677 X 1000 pixels, file size (in bytes) - 201827. You can open this downloadable and printable map of Kaiserslautern by clicking on the map itself or via this link: Open the map.
Kaiserslautern - guide chapters 1 2 3 4 5 6 7 8 9

Search for services, infrastructure and sights on map of Kaiserslautern

Our guide chapters over Kaiserslautern

Kaiserslautern is one of the largest cities of the country. This is a modern communication and scientific center. Rich historical heritage and amazing beauty of Kaiserslautern has made it a favorite place of rest of thousands of tourists. This city will be particularly loved by people who enjoy sports and active rest as there are many parks and green zones with numerous roads for pedestrians and cyclists. You can … Open

Besides numerous shops, the center of the city has several more interesting landmarks that tourists will find exciting to explore. Kaiserbrunnen is a large fountain that has become of the major symbols of Kaiserslautern. It is decorated with a gorgeous ornament that describes the main events in the history of the city. At a glance, it is hard to understand the meaning of all figures and bas-reliefs, so take your … Open

Kaiserslautern is a favorite of numerous tourists because of its medieval atmosphere, cheerfulness, and a variety of entertainments available to tourists. First of all, tourists head to the main city square. It has the highest concentration of restaurants for any taste, souvenir shops, and old landmarks. The city council is located nearby. By the way, travelers can enter the building, dine inside or head to the top … Open

Here are the ingredients needed to cook this salad: several potatoes, one fresh and marinated cucumber, fresh greens, four tablespoons of water, olive oil, white grape vinegar, and mustard. Black pepper and bay leaves are the most typical spices used in the dish. To make the salad, boil potatoes in their skins with bay leaf and black pepper. After that, peel the potato and slice it into thin pieces. Cut the slices … Open

The population of the city deserves a mention. Approximately a hundred thousand people live in Kaiserslautern, with Europeans being the majority. Additionally, roughly fifty thousand NATO soldiers live in the city and its neighborhoods. There is an explanation to this fact – in the 50s of the previous century, Kaiserslautern became the largest military base of the United States outside the country. By the way, … Open