Detailed hi-res maps of Koblenz for download or print 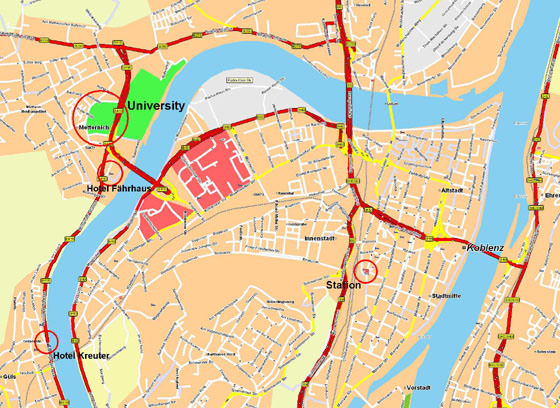 Search for services, infrastructure and sights on map of Koblenz

Our guide chapters over Koblenz

A number of important religious sites are also located in the center of Koblenz. It is recommended to include a visit to St. Florin, St. Castor and St. Mary cathedrals to your excursion. All of them were founded in the 11th-12th centuries and are constructed in the Romanesque style. These majestic monuments have survived to our times almost undamaged. Churches boast not only with an impressive appearance, but also … Open

Koblenz cannot boast a variety of parks, one of the largest and most beautiful ones is Festungspark. Located on the bank of the Rhine, it has comfortable walking and cycling paths. In the summer, when flowering plants adorn the park, here you can enjoy sports activities or have a picnic. In the vicinity of Koblenz, in the town of Bendorf, is the original tropical Butterfly Garden. It is home to exotic … Open

Those, who like sushi and rolls, wouldn’t find a better place to stay than a Sushi Bar Pirates. It has won recognition from customers thanks to a huge selection of treats, high quality of food and affordable prices. Sushi Bar Pirates differs with its decor and original artwork. Italian cuisine is promoted by Trattoria da raffaele. In the evenings romantic atmosphere and live music reign there. The specialties … Open

Traditions and mentality of Koblenz

In July, the city hosts the Farbrausch Festival, which always attracts many young tourists. The event is dedicated to sports and modern electronic music. Its program includes sports competitions and demonstration performances of athletes accompanied by themed music. Venues for sports programs are set in city parks and squares where all comers can watch performances of athletes free of charge. Koblenz joins the … Open

An architectural monument of the 18th century is the Palace of Electors. Originally it was built as a residence for archbishops. In the middle of the 19th century, the palace was the official residence of the Prussian royal house. For eight years, Prince Wilhelm lived there. This beautiful palace was almost completely destroyed during the Second World War. After the end of hostilities, it was restored in the … Open

Koblenz for children - what to visit

First and foremost, in the hometown of Thomas Anders, a member of Modern Talking, be sure to visit Freizeitbad Tauris Water Park. A large indoor pool is especially popular here. Like any other facility in Germany, this one is clean and well maintained, and the staff is always ready to help. Here is also an outdoor swimming pool where you can spend a good time. Slides are available for the smallest kids and for … Open