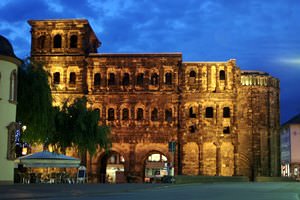 Trier is not only the oldest city in Germany, founded in 15 BC. but also the owner of numerous sights of Roman and medieval architecture, part of which is included by UNESCO in the World Cultural Heritage. Here, you will enjoy the priceless historical sights and architectural masterpieces; the most famous is Porta Nigra, the famous imperial baths, the remains of Barbara's thermae, the Roman bridge and the amphitheater. The monuments of the Christian era are not less significant: St. Peter's Cathedral, the Basilica of Emperor Constantine, and the Holy Mother's church in the early Gothic style.
Your active city break in Trier. Attractions, recreation and entertainment - best places to spend your day and night here
Trier is a university city, so cultural life is developed here. Bright signs of shops, cafes, and bars invite you to forget about the hectic everyday life, as well as cultural centers and …

Open
Trier will amaze you with its beautiful nature, as far as about 52% of the area is covered with parks, forests, lakes, and quays. Locals take care of the environment and enjoy spending nice day on the nature with family and friends. The population of the city is rather small, and most of the residents are working in Luxemburg due to higher salaries and better job market. Nevertheless, the most popular profession here is the doctor. The population of Trier is very polite, punctual, and serious. For example, if you desire to have a party at home, better think twice: after 9:00 pm, residents prepare to sleep and do not accept any noise. If you have the desire to party, better visit the disco or the nightclub.
In the city, you will feel the proximity of Luxembourg, France, and even Italy. In other words, the atmosphere here is atypical for Germany. The local cuisine is more elegant and exquisite than traditional one, as far as is done in the French manner. Local people use many borrowed words, so you can better understand them. In Trier, you will be able to enjoy international delicacies, the taste of which is highlighted by the excellent wines from the wineries along the banks of the Moselle and Saar rivers. By the way, Trier is also considered a perfect point for one-day routes along the Moselle River and to Luxembourg. In addition, local winemakers invariably participate in various city festivities and festivities celebrations dedicated to wine. Copyright www.orangesmile.com
Advices to travellers: what you should know while being in Trier
1. Local people have much respect to French and Italian cuisine, so you should definitely visit the restaurants that specialize in these cooking directions. 2. If you go to …

Open
Trier is considered the cradle of German wine culture. Here you can try the most famous Moselle wine, and in May find yourself at the festival of wine and fine gastronomy. During the event, the city is filled with the atmosphere of the holiday, and local restaurants offer the most exquisite delicacies. Such an important event gathers over 100 wine and culinary companies, which represent their best products. Riesling wine is the most popular local bin here and is also called as a symbol of German winemaking. Its taste is the combination of sweetness and freshness, which eventually transforms into a more complex and rich bouquet. Moreover, every guest can try a variety of dishes cooked by the professionals of the culinary art. Moreover, the music lovers gather in Trier during the Moselle Music Festival, which is held annually from June to October. The concerts are held in Trier Cathedral, in the Palace of the Elector and the Old Basilica, and annually attract a huge number of tourists from all over the globe. 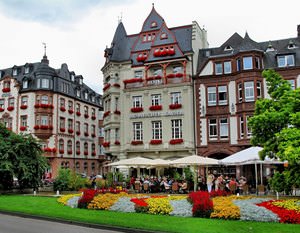 Carnival in Trier is probably the most anticipated event in November, which includes the additional festive celebrations. The festival starts from the contest, where people choose the prince and princess of the carnival. Later, they will lead the holiday. The street carnival begins with the Women's Day in the Main Market Square (Thursday preceding the Ash Wednesday). During Tulip Sunday, you will witness various carnival processions in most of the regions. On Pink Monday, the Trier Carnival reaches its apogee. A carnival procession of 100 carriages with dancing and merry participants passes through the whole Old Town. Then a big final party begins in the park when people choose the best cart for the carnival procession. In the urban area of Biewer, during the carnival you will also witness a procession of jumpers - this tradition has, presumably, Celtic origin.
Trier design-hotels for stylish travellers
One of the most attractive and popular designer hotels in Trier, ante porta DAS STADTHOTEL is located not far from the Black Gates and other outstanding landmarks of the city. Its guest …

Open
Trier is worth visiting during the Christmas holiday when the city turns into a magical fairy tale from the kids' books. The traditional Christmas Fair has been held annually in the Old Town since the end of November until Christmas. Here you will enjoy various festively decorated wooden house-shops, opened in the Market Square and in the courtyard of the Cathedral. In these tents, you will be offered to purchase traditional Christmas souvenirs - Christmas decorations, wooden toys, candles, glassware, gifts, and ceramics. In order not to freeze, the organizers of the festival installed the tents with fried sausages, potato pancakes, sweets, hot tea and, of course, mulled wine. On the first day of the fair, the mayor of the city greets all the guests and tourists. Tourists with children can visit the festive performances in the puppet theater. On the Trier Christmas Fair, you and all the family will find entertainment to own liking and leave the fair with good mood and positive impressions.

This guide to traditions and festivals in Trier is protected by the copyright law. You can re-publish this content with mandatory attribution: direct and active hyperlink to www.orangesmile.com.
Trier - guide chapters 1 2 3 4 5 6 7 8 9 10 11 12 13

Cathedrals and basilicas near Trier
♥   Dom St. Peter, Trier, 1 km from the center. On the map

♥   Basilique Saint-Willibrord, Echternach, 16.8 km from the center. On the map

Survived castles around Trier
♥   Castle 'Beaufort Castle' , 26.7 km from the center. On the map

Unique landmarks in Trier and around

Distance from Trier center - 65 km.
Travelers who want to have a look at the amazing natural attractions from a height have to go to Germany, to the Bavarian National Park. This nature reserve is the biggest in Europe. A significant part of its area is covered by forests. Here an unusual wooden tower with a complicated name Baumwipfelpfad was built among impenetrable thickets of trees. That's a complex of wooden bridges and tracks, which ends with a dome with a spiral staircase. At the top of the dome, which is directed upwards by 25 meters, there is an observation deck. … Read further

Colors of Trier in photos

Traditions and festivals in cities around Trier

Luxembourg
Locals treat travelers with great caution. They are always polite, fellowship, and happy to help. However, local residents also expect travellers to be polite and respectful. Any embarrassing or negligent behavior can greatly offend the townspeople. When it comes to topics for conversations, the locals do not like discussing culture and religion with visitors. In their point ... Open »
Dudelange
Residents of Dudelange are calm and reserved individuals. They will never use any rough words when dealing with others. In order to impress a local, simply do two things – follow local rules and express interest in local culture and traditions. It is also important to mention that residents of the town are incredibly friendly and open people. They are always ready to help, so ... Open »
Saarbrucken
The city of Saarbruecken is known for its rich and bright cultural life as during the year the city holds numerous festivals and carnivals of global scale. One of such country scale festivals is the Filmfestival Max Ophuls Preis being devoted to German cinema art. The festival takes place in January and its program encompasses numerous engaging events among which festival ... Open »
Metz
Another interesting holiday - the Lorraine Mondial Air Ballons - is held in the city in September. During this period, visitors to Metz will have the opportunity to participate in interesting recreational activities and admire colorful balloons rising to the sky every day. The most popular entertainment at this time is hot air balloon rides, during which one can admire the ... Open »
Kaiserslautern
Kaiserslautern is an old city that has survived through many epochs. During its long history, the city hasn’t changed much in size, so it is still not very big. Perhaps, this is the reason why the atmosphere of peace and serenity reigns here. It feels like time has stopped in Kaiserslautern, so it is the right place to forget about all troubles and relax. Despite the fact ... Open »
Koblenz
During this period, the Ehrenbreitstein Castle, the main historical symbol of Koblenz, becomes one of the most attractive objects. During historical reenactments arranged on the castle grounds, you can admire actors wearing old-fashioned clothes and take part in interesting competitions. Attending one of the historical holidays, one can learn to shoot a bow and wield a ... Open »

Cityguide on traditions, mentality and lifestyle of people in Trier. Learn the best periods to visit Trier to discover its soul - authentic festivals, events and celebrations. We will also reveal the interesting habits, attitude towards the world and to tourists in Trier.