Detailed hi-res maps of Hannover for download or print 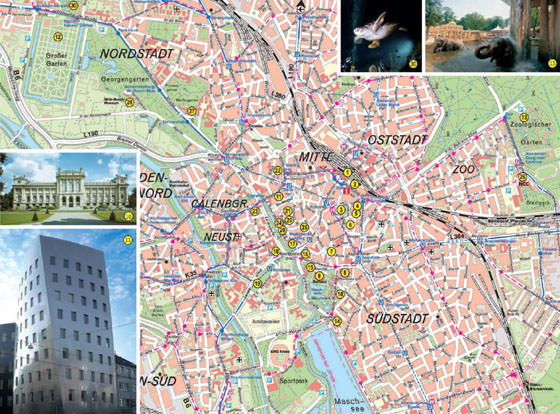 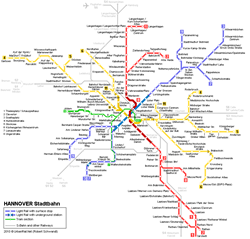 Search for services, infrastructure and sights on map of Hannover

Our guide chapters over Hannover

Among the unusual symbols of Hanover is the Kropcke Clock, located on the square of same name. They were installed in the 19th century. Like many years ago, today these beautiful watches are meeting points for dates. Newlyweds have a very unusual ritual associated with this monument. It is believed that the wedding cortege should stand next to the clock for at least five minutes, then, the newlyweds are guaranteed a … Open

Romantics, as well as couples on holiday, will for sure like the luxury hotel Wyndham Hannover Atrium, located in the Gross Buchholz district. It has everything you need for a good rest at the highest level: exquisite luxury rooms with rich decoration, a spa with a wide range of services and a well-equipped fitness room. For many tourists, the hotel is known for its bar located within its walls, and where you get … Open

Hannover for children - what to visit

Travelers who plan to visit Hanover in the warmer months of the year should definitely look into the park Kleefelder Bad. It remains a favorite place of recreation not only among tourists, but also among the townspeople. In summer, there are always many tourists in the park. Here you can have a tan lying on green grasses, and you can arrange a picnic or play sports games with children. In the park, there are also … Open

Among the apart-hotels available to guests of Hannover, there are also some quite original ones, like the Exclusive Apartment. It offers guests three rooms with unique interior designs. Each room has a huge double four-poster bed, which is complemented by a lighting system. The floors in the rooms are covered with beautiful parquet and the furniture presented in the rooms is also made of natural wood. The rooms are … Open

There is a brand Salamander shoe store in Hanover, where you can purchase great shoes at the most attractive prices. A pair of classic men's or women's shoes will cost about 40 euros. Lovers of exclusive shoes will find models for 50 - 80 euros. The quality of shoes in this store deserves the highest praise. Travelers who like to go round malls should not ignore Kaufhof complex. It is difficult to imagine a … Open