Detailed hi-res maps of Lemgo for download or print 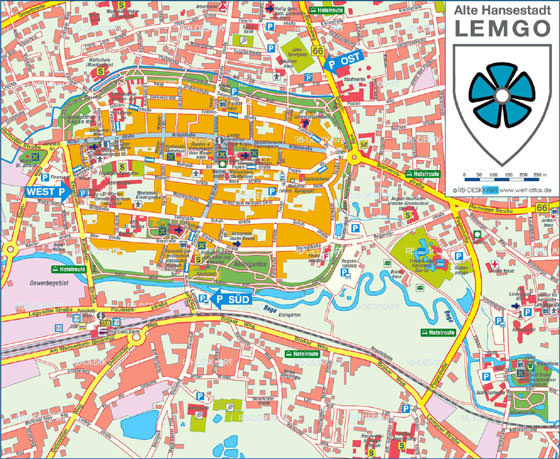 The consumer industry has been declining in recent years, due to a decrease in the sales market. The textile area in Germany is the Ruhr region. The main branches of the food industry are winemaking and brewing. At the same time, one third of the output goes for export. Germany ranks second in the world in terms of exports. The basis of the country's imports are oil and natural gas, as well as coal. The main trading partners of the country are the USA, France, and UK. Reliable trade relations are established with the countries of East Asia and Eastern Europe. … Open

Search for services, infrastructure and sights on map of Lemgo

Our guide chapters over Lemgo

Lemgo is the location of a Fachhochschule Lippe und Höxter educational facility, so there is always much youth on the streets on the town. This makes Lemgo a lively place. Tourists, who want to know more about the history and culture of the town, are welcome to visit museums, exhibitions, and concerts that often take place here. In this city there is also an independent theatre group Stattgespräch that organizes … Open

Over hundreds of years, the castle has been constantly rebuilt and reconstructed. Finally, it gained its present appearance in the 19th century. Now the entire territory of the old castle is open for tours. It was possible to restore the atmosphere of past years in some of its halls. They keep interesting collections of art, antique furniture, and weapons, as well as other historical artifacts. The castle has also … Open

Lemgo cannot boast of a variety of noisy entertainment centers. The main way to spend leisure time for its guests and locals is walking along the picturesque streets and squares. In the vicinity of the city, there are many beautiful parks and reserves. The largest number of opportunities for outdoor activities are available for tourists in the warm season. Kurpark Park that was formed on the riverbank is a must-have. … Open

Local cuisine is an original mix of Rhenish and Westphalian gastronomic traditions. Traditionally, here they use a lot of seasonal vegetables, prepare very hearty meat dishes and cherish the traditions of pastry making. In spring, it is time for asparagus, from which excellent vegetable salads and garnishes for meat dishes are prepared. Most vegetable salads and soups are prepared in the summer, and in the winter, … Open

Traditions and mentality of Lemgo

Artists and musicians perform on city streets, interesting contests and special activities are organized for children. During the holiday, the lively atmosphere on the streets of Lemgo doesn't calm down until late at night. Many people go to fairs with the onset of darkness. A mandatory attribute of the festive weeks is a wonderful illumination, which makes historic buildings look truly unparalleled. Old … Open

This museum is located in a historic building with a complex name Hexenbürgermeisterhaus, which locals came up with in the 19th century. Once, this building was the home of the mayor Hermann Kottmann. He was the mayor of Lemgo in the late 17th century. This building now stands out in a variety of other rich decoration of the facade, on which there is a skilful carving and interesting sculptures. Not far from … Open