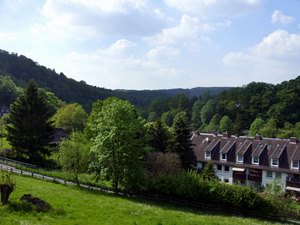 Start your sightseeing from visiting beautiful Elisa Tower, which is located in the picturesque district of Hardt. The height of building is 21 meters at its top is equipped with an excellent observation deck, which provides unforgettable panoramic views of the city. The tower got its name in honor of the wife of King of Prussia, Elisabeth of Bavaria. The tower is considered one of the most beautiful monuments of the Middle Ages. The building is surrounded by a beautiful park, which is a popular place of rest for both locals and tourists. While walking through its shady avenues, you can reach a beautiful botanical garden. An excursion in the garden must also be present in the recreation program.
Top places to stay in Wuppertal - most luxurious hotels
Wuppertal is not deprived of first-class hotels that are ready to offer customers chic rooms and impeccable service. One of the most popular and prestigious hotels in the city is …

Open
A no less interesting architectural landmark is located in Elberfeld quarter. This is the building of the old town hall. The building is made in a pseudo-Gothic style and is decorated with graceful tall towers and huge panoramic windows. Currently the Town Hall is occupied by one of the local municipality offices, so visiting its interior premises is prohibited for visitors. Every day the square in front of the town hall attracts a huge number of people, who come there to take a picture of the original building.
The opening of the abovementioned Botanical Garden took place in 1890. Today this is one of the most magnificent and beautiful gardens in Germany. The huge territory of the garden has become home to numerous tropical crops. During an excursion in the garden visitors will see approximately four hundred exotic plants. The garden is divided into several thematic zones. Its territory includes a beautiful artificial lake and green groves with gigantic trees, and even greenhouses with exotic fruits. The local zoo has become a kind of a tourist attraction. The zoo was founded in 1879. Now its territory is home to more than five thousand exotic animals imported from all over the world. Copyright www.orangesmile.com
Best hotel choice for romantic escape, wedding or honeymoon in Wuppertal
Couples who choose Wuppertal for a joint vacation should definitely pay attention to the also-Hotel an der Hardt. The hotel is located next to the picturesque Hardt-Anlagen Park, a couple of …

Open
Continue your acquaintance with architectural monuments of Wuppertal during an excursion to the Tower of Bismarck. A beautiful memorial tower was erected in honor of the first chancellor of the country and was named after him. The top of the tower is also equipped with an observation deck, which can be visited by anyone. A funicular road is a one more interesting attraction of the city. The road is included in a system of public transport. The length of the road is more than 13 kilometers. A ride in the funicular will also become an unforgettable adventure. An ancient wagon will be of particular interest for tourists – once the wagon was used by the special first passenger of the road - Kaiser Wilhelm II of Germany.

In the section below, you can get one of our excursion, activities or city discovery tours over Wuppertal and surroundings. Our website offers 10-30% lower ticket prices, when compared to the offline purchase on the spot.

City tours, excursions and tickets in Wuppertal and surroundings

This guide to cultural sights Wuppertal is protected by the copyright law. You can re-publish this content with mandatory attribution: direct and active hyperlink to www.orangesmile.com.
Wuppertal - guide chapters 1 2 3 4 5 6 7 8 9 10 11 12
Reference information
Map of all palaces

Public palaces near Wuppertal
♥   Palace 'Schloss Benrath' Düsseldorf, 24.8 km from the center. On the map

Art galleries in Wuppertal and around
♥   Art museum 'Von der Heydt Museum' Wuppertal, 2.8 km from the center. On the map

Cathedrals and basilicas near Wuppertal
♥   Basilika St. Margareta, Düsseldorf-Gerresheim, 22.5 km from the center. On the map

♥   Basilika St. Lambertus, Düsseldorf, 29 km from the center. On the map

Unique spots in Wuppertal and near

Distance from Wuppertal center - 39.5 km.
A beautiful sculpture of the Milan Madonna is located in the cathedral. It is also considered an outstanding sculptural creation in the Gothic style. Many beautiful legends are associated with Cologne Cathedral. According to one of them, the devil helped the architect Gerhard make drawings of the unique facade. The architect's wife managed to outwit the devil and save her husband's soul from a terrible fate. Another legend says that the devil was so angry at the deception that he predicted the end of the world on the day when the cathedral will be completed. Perhaps this is why one of the most beautiful Gothic cathedrals in the world was never completed. … Read further

Distance from Wuppertal center - 39.7 km.
The main element of the architectural complex is the 61 meters tower, that was built in the 15th century. Five stored tower is decorated with outstanding sculptures. There you can see about 120 figures of outstanding historical leaders, holy people and honorary citizens. Nowadays in the building has placed an interesting museum of Roman civilization. … Read further

Photogallery of cultural heritage of Wuppertal

Excursions over cultural sights of neighbours of Wuppertal

Essen
Essen is a major industrial and exhibition center, business travelers are main guests of the city. Anyway, it is quite attractive for ordinary travelers. Essen was badly damaged during the Second World War; much of historical buildings were destroyed. The main historical symbol of the city and its most important attraction is the Essen Cathedral. This unique monument of ... Open »
Langenfeld
In the city and its surroundings, there are many interesting historic sites. While walking through the city streets, you can admire many beautiful old buildings. In the very heart of the city is a sumptuous late 16th-century building, which is presently occupied by prestigious Hotel Zum Hirschen. The city has remained completely untouched during the Second World War, so much of ... Open »
Leverkusen
Leverkusen is rich in interesting historical sights, here you can plan an exciting excursion program. On one of the main streets is the old Protestant church Christuskirche built in the early 20th century on the initiative of the local community. Red brick served as the main construction material for the church. Thanks to the traditional rosette windows and decorative arches, ... Open »
Gelsenkirchen
Among cultural attractions of the city, it's worth noting the Musical Theater, the construction of which started in 1956 and lasted three years. The beautiful theater building is one of the most beautiful architectural monuments of the postwar period. The theater's huge hall can accommodate 1005 people at a time, offering luxurious design and unique acoustics. Several ... Open »
Oberhausen
Fans of unusual tours and attractions should go explore the vicinity of the city where Halde Haniel is located. This stockpile was formed naturally through the course of industrial development of local deposits. It is notable for its scale and height of 159 meters. Now it is located in a vast landscape park where fascinating tours are held every day. Several years ago, a kind ... Open »
Dortmund
Without a doubt, Dellwig House is one of the most interesting architectural sights of Dortmund. This beautiful castle on water was built in the beginning of the 13th century. At that time it belonged to a noble family. During its centuries old history the castle has been repeatedly destroyed and rebuilt, so now the facade of the building is an interesting mix of different ... Open »

Culture guide to Wuppertal. Which fascinating sights to visit once you are in Wuppertal: temples, churches, museums, theaters and castles. Recommendations (with addresses, phone numbers and links) on the places 'must visit' in Wuppertal. Plan your own city excursion by using this page info!