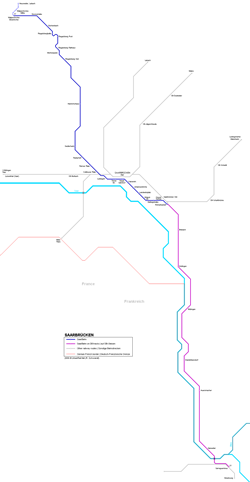 Interactive maps of hiking and biking routes around Saarbrucken

1. You can zoom in/out using your mouse wheel, as well as move the map of Saarbrucken with your mouse.
2. This interactive map presents two modes: 'Biking Routes' and 'Hiking Routes'. Use the '+' button on the map to switch between them.

This Saarbrucken map has two modes: 'Railway Network' and 'Landscape & Rural Map'. Use the '+' button on the map to navigate.

Our guide to Saarbrucken

Start exploring the city from visiting St. Yohanner Markt square. Here you will find most popular cafes and restaurants; every morning thousands of local people gather on the square to enjoy a cup of morning coffee in one of the outdoor terraces. One of the main attractions of the city, Palace Schloss, is also located here. This magnificent building features a unique combination of modern and baroque styles. Luxury … Open

The Palace Church was badly damaged during the World War II however its building was entirely restored by modern architects. The main decoration of the church building is elegant stained glass artworks aged more than four hundred years old. Another remarkable construction of the city is the Saarkran. Objects of the kind first appeared in the city of Saarbruecken in the middle of the 18th century. In those days the … Open

Not far from the city center tourists will find a scale sport center named Ludwigsparkstadion. Open air leisure enthusiasts will hardly find a better place to rest and recreate than the German-French Garden. One of the main features of the city is plenty of shopping centers and boutiques. The Kaufhof gallery takes an entire street block. The gallery offers all sorts of goods starting from brand clothes and … Open

Among upscale restaurants of the city the Gastehaus Erfort eating house is most worth attention of city guests. It will meet its visitors with a variety of dainty treats inviting them to relax and enjoy meals in festive atmosphere of its spacious hall. The hall being decorated in light shades will be a perfect place for holding of any festive event. The Kuntze's Handelshof restaurant offers a vast choice of treats of … Open

Traditions and mentality of Saarbrucken

The Premabuba carnival is traditionally held in the second part of February. Bright street parades and marches, plenty of unique costumes and dresses, loud music and breath taking entertainment shows are only few of the events on the schedule of the carnival lasting for three days and filling the city with unique inimitable festive atmosphere. The Weiberfasching carnival by a variety of entertainments and events … Open

Nearby, the Town Hall of St. Johann is situated. Its construction took place in the late 19th century and lasted three years. The town hall was created according to the project of the famous architect Georg von Hauberisser. One of its main features is a tall tower. It rises up to an altitude of 54 meters and is visible from many city streets. Despite the fact that the town hall was built in the 19th century, it is a … Open