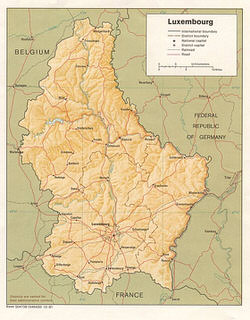 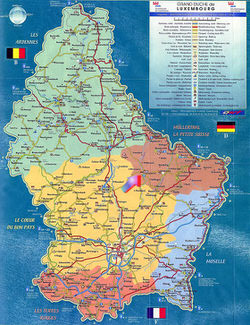 Interactive maps of hiking and biking routes around Luxembourg

1. You can zoom in/out using your mouse wheel, as well as move the map of Luxembourg with your mouse.
2. This interactive map presents two modes: 'Biking Routes' and 'Hiking Routes'. Use the '+' button on the map to switch between them.

This Luxembourg map has two modes: 'Railway Network' and 'Landscape & Rural Map'. Use the '+' button on the map to navigate.

Luxemburg - moving around the country

Air transportation in Luxembourg is very developed, despite the small size of the State itself. The main airport of the c country is Luxembourg Findel. It is located just six kilometers from the city. The most standout feature of the airport is the solid surface of its runway. Luxembourg Findel is quite a large airport. It has two terminals. Basically, it employs two major airlines Luxair, and Cargolux. The infrastructure of the airport terminals will also pleasantly surprise even experienced travelers. On the first floor there is a comfortable lounge, while flight registration takes place on the ground floor. The control of luggage is also carried out here. … Open

Overview of festivals and celebrations in Luxemburg

The inhabitants of Luxembourg live in the anticipation of a magical act all week before Christmas. Everywhere there are markets, the main assortment of which is a large assortment of various souvenirs and gifts mainly hand-made. You can buy them only at a certain pre-Christmas time. On the shelves you can find stone and wooden hand-made articles, candles with various flavors, small statuettes of angels and other variety of goods. In addition, local chefs produce homemade honey cakes, candy floss, chestnuts and fried sausages and also sell them. The streets are filled with the sounds of Christmas tunes, performed by a brass band. … Open

Our guide to Luxembourg

Luxembourg is the capital of the same-named state. The city is built on a rock, and this fact gives it a unique charm. Luxembourg is internationally well-known thanks to various EU institutions and a well-developed banking network. More than a third of the population is born outside the country, and this fact explains a special atmosphere and a true international spirit of the city. You will feel this diversity … Open

Luxembourg is full of interesting attractions, museums and charming parks. Grand Ducal Palace is, surely, one of major tourist sites of the city. This is a truly beautiful architectural structure. Travelers, who visit the city during July and August, will have a unique opportunity to walk through the corridors of the palace and visit its halls. The reason for this is in the fact that at this time of a year the Grand … Open

Tourists remain the main visitors of the city’s bars and restaurants. Locals are quite indifferent to the city’s nightlife entertainments. There are not so many facilities and venues that operate at night in Luxembourg. Rest in this city will be more pleasant for those tourists, who prefer quiet holidays. Walking in picturesque suburban areas is one of the main entertainments for tourists. Fans of hunting … Open

It's amazing how in such a modest city can be located such a great number of dining facilities. You can find at least ten different restaurants and cafes almost on every street in Luxembourg. Italian cuisine is very popular in the city. You will find best restaurants serving it near Place d'Armes Square. Those, who want to have a quick and inexpensive lunch between excursions, will definitely like La Fontaine … Open

Coque Hotel, which is located on Kirchberg Plateau, is a true masterpiece of designer art. This hotel is open in a unique futurist-looking building. The décor of guest rooms is simply inimitable – they are made in white and green shades, which are perfectly combined with light wooden décor. Wallpapers with 3D effect remain the main peculiarity of guest rooms. Thanks to them, upon entering the rooms, visitors feel … Open

Traditions and mentality of Luxembourg

Locals can seem withdrawn and unsociable to tourists. They are very sensitive to everything that concerns their families and will never let strangers into their family life. In questions concerning private life these people are quite adamant and inflexible, but everything is completely different when it comes to communicating with friends and colleagues. Locals are loyal, cheerful and sociable friends, who never … Open