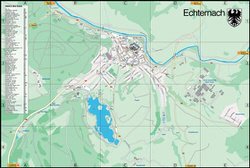 Interactive maps of hiking and biking routes around Echternach

1. You can zoom in/out using your mouse wheel, as well as move the map of Echternach with your mouse.
2. This interactive map presents two modes: 'Biking Routes' and 'Hiking Routes'. Use the '+' button on the map to switch between them.

This Echternach map has two modes: 'Railway Network' and 'Landscape & Rural Map'. Use the '+' button on the map to navigate.

Luxemburg - moving around the country

If you decide to rent a car in Luxembourg, do bear in mind that on weekends and on holidays, there are difficulties with securing a parking space in major cities. If you want to avoid such trouble and save money, it will be possible to rent a bicycle, although at the moment there are not many bicycle paths in the country. Taxis which are another means of getting around are also very popular in Luxembourg. You can call for a taxi via the phone, or just stop one on the street. There are also special parks designated for taxis near hotels, and railway stations. Charges are calculated approximately: landing fees cost at least 1 euro, and subsequently the cost is 70 cents per kilometer. Prices are however slightly higher on weekends and holidays. … Open

Nature and parks of Luxemburg

The largest park in Luxembourg is the De Ville Park, created on the site of the ruined fortress in the 19th century. The park is located in the heart of the city of Luxembourg. It is decorated with spectacular classic fountains and sculptures made in a unified style. In the De Ville Park, one can walk on foot, or go on an exciting trip on special routes on a bike rented there. Another place for an interesting walk is the sculpture park of Michel Rodange. The park is in the town of Wiltz. Originally it contained a monument of Michel Rodange himself, a famous poet and writer. Over time, other sculptures began to appear in it. … Open

Our guide to Echternach

It is easy to get to Echternach by bus that departs from the central bus station in Luxembourg every day. In this case, you need the bus #110-111. You will reach the charming Luxembourg town in just half an hour. Are you a driver? Then you can drive to Echternach using the road to Kirchberg. Needless to say, there are always taxi drivers who are ready to bring tourists to the picturesque town. … Open

Maps of Trier
Like feeding birds in the parks? No worries, in Trier you will have such an occasion in the Nels Lankden park. Here live very beautiful inhabitants, who are not afraid of people - swans and ducks. Getting to know them will bring you a lot of positive impressions. Moreover, these birds enjoy walking with people along the lakeshore. If you are looking for the place where you can ... Open »
Maps of Luxembourg
The most famous route is the "Wine path", which is in the line of the Moselle valley. The Moselle Valley is the center of winemaking in such countries as Luxembourg, Germany, and France. Moreover, here you have an amazing opportunity to visit one of the wine tours. During these tours, you can taste the local wine, get acquainted with the process of winemaking. Tourists can ... Open »
Maps of Saarbrucken
The City market is another attractive shopping establishment of the city. The center offers its customers a vast choice of goods produced in Turkey. Despite rater low prices the goods are of extremely high quality and of rather attractive image. The city offers numerous stylish nightlife establishments. The most popular clubs and bars among them are located in the area of the ... Open »
Maps of Metz
The city has many nightclubs and bars, creating excellent conditions for an exciting evening. One of the most atmospheric places in town is Le Troubadour, which has become a permanent venue for fiery parties and music concerts. Famous rock musicians and jazz bands often perform at this club. Themed programs are organized for visitors several times a week. A huge selection of ... Open »
Maps of Spa
After enjoying the water treatments, you can stroll along the Parc de Sept Heures. The name of this place can be translated as “Seven o’clock Park”. This name was fixed because of the popularity of this area for evening walks among the aristocrats in the 18th century. This place is incredibly beautiful. It is made in the best traditions of public parks of the 1750s. ... Open »
OrangeSmile.com - online travel reservation expert providing reliable car rental and hotel booking services. We feature more than 25.000 destinations with 12.000 rental offices and 200.000 hotels worldwide.
Secure Server