Preparing your trip to Mainz: advices & hints - things to do and to obey 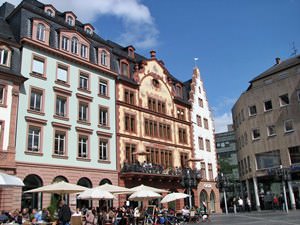 1. The warmest months in the year are considered to be July and August. During these months the day time temperature reaches about 23C. The summer is considered to be the heat of the tourist season that is why one should take care of summer hotel booking in advance.
2. Upscale shopping centers and luxury boutiques accept international credit cards however setting off to the small shops and boutiques as well as to the markets of Mainz one should be backed up with enough cash. The purchases are most profitably made in national currency as the currencies of other countries may simply not be approved for payment.
3. The city is better be cruised on foot as many districts of Mainz are designed for pedestrians. Some city sights are located in few minute walk from each other. That is why a simple hiking may turn to an engaging city sights tour.
4. To rent a car one will need passport, driving license and a credit card with enough cash to cover the gage. Customers under 21 as well as those who drive a car for less than a year may be denied in renting.
5. One of the most popular transport means is a bicycle. City visitors may rent a bicycle in one of the numerous rental centers. No additional documents are needed to rent a bicycle, as a small cash gage will be enough. Along the major routes one will find specialized cycling lanes which make the bicycle traffic even safer. Copyright www.orangesmile.com
6. Shops and shopping center get open not later than 9 am and work till 7 – 8 pm on weekdays. Saturday is considered to be the shortened working day meanwhile Sunday is a usual day off. Shopping addicts are highly recommended to pay a visit to Mainz during Christmas holidays when almost every shop offers grand sales.
7. Prudent tourists should pay attention to local pubs and beer restaurants as major of them add a glass of expensive beer with an impressive portion of rich snacks which can be a substantial filling dinner.
Authentic traditions, festivals and lifestyle of Mainz inhabitants
Cultural life of Mainz is rich and diverse as each season of the year features interesting festive events. Despite of beer being considered by travelers the favorite drink of local people, …

Open
8. Tipping is welcome in all restaurants and cafes. In upscale eating establishments the tips are included in the total bill and equal to 15% of the total order sum. In small budgetary establishments and cafés 5% of tips are quite enough for good service reward.

Preparing your trip to Mainz: advices & hints - things to do and to obey You can re-publish this content with mandatory attribution: direct and active hyperlink to www.orangesmile.com.
Mainz - guide chapters 1 2 3 4 5 6 7 8 9 10

What to visit being in Mainz - unique sights

Distance from Mainz center - 17.3 km.
The park has been divided into several thematic zones. In addition to the unique railroad, one can see models of famous natural and historical regions of the world. Of special interest are the residential quarters of Hamburg designed in the park, which many experienced tourists come to admire with the onset of darkness. In the evening, lights are lit in tiny windows of houses, which makes the model even more realistic. Ruins of ancient castles, models of busy markets, famous religious sites and educational institutions - you can see models of objects of very different specificities in the park of Wunderland. … Read further

Distance from Mainz center - 29.7 km.
A small chapel was built on the territory of the castle in 1839. The tomb of Prince Frederick, as well as one of his sons, is located in it. The fortress was full of life during the years when the Persian prince owned it. He held grand jousting tournaments and balls here. He also invested huge sums in the design of the castle. Unique stained glass windows from the 14th century were delivered to it. Some of the unique wall paintings, including masterpieces by the famous artist Ludwig Pose, are preserved in the fortress. … Read further

Tips for the cities around Mainz

Wiesbaden
3. Tickets for travel can be purchased at any newspaper and tobacco shop, in pubs and post offices. Tourists, who expect to travel around the city a lot, are recommended to take a city map that shows all public transport routes. It can be found in the majority of excursion bureaus. 4. Most attractive shops and shopping centers can be found in Fusgangerzone district. ... Open »
Frankfurt am Main
3. Travelers arriving to the airport of Frankfurt can get to the city center by train. In this case, the journey will take about 15 minutes; trains S8 and S9 go to the downtown. An alternative to electric trains is a bus, but in this case the trip can be a little bit longer. 4. Travelers who arrive by car have to consider that during the daytime traffic along major highways ... Open »
Offenbach
3. The city has a developed system of public transport. Buses are cruising the city from the early morning till the late evening. Tourists can get to any district of the city by bus. Prudent tourists are recommended to buy several tickets in advance as in this case one can get a discount. 4. Large hotels and tourist information centers offer travelers to buy a special tourist ... Open »
Mannheim
3. Prudent tourists will love local supermarket stores Karstadt, Kaufhol and Hertie. There the tourists will find fresh foods as well as fresh salads and hot pastry at most attractive pricing. Buying the foods in the supermarkets is much cheaper and more profitable than in budgetary eating places. 4. Shopping addicts are advised to visit the city at the end of the tourist ... Open »
Koblenz
3. Almost all major shopping centers, restaurants and hotels accept service payment with credit cards. They deal with cards of international standard. Large amounts of cash are necessary to those only, who hope to make purchases in markets or in small retail pavilions. 4. You can exchange money not only in banks and private exchange offices, but also in the department of the ... Open »
Kaiserslautern
3. It is a good idea to rent a car and explore the countryside. However, tourists need to be careful because it is easy to get lost. Because of that, it is always a good idea to plan the route carefully beforehand and always have a map at hand. 4. The local climate is mild and generally pleasant, but it is still better not to forget about sunscreen and a hat in summer and ... Open »

Travelling to Mainz - advices and tips. What should be provisioned in advance, the rules you might want to follow, and the things you better avoid doing in Mainz. We help you to make your trip smooth and easy, with no unexpected surprises.