Detailed hi-res maps of Mainz for download or print 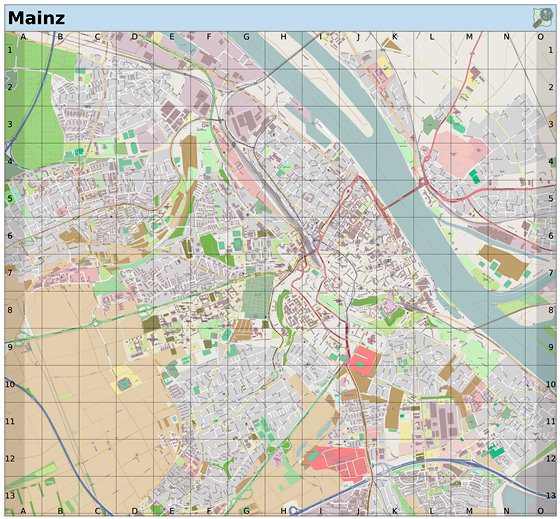 The actual dimensions of the Mainz map are 4062 X 3766 pixels, file size (in bytes) - 3195148. You can open this downloadable and printable map of Mainz by clicking on the map itself or via this link: Open the map. 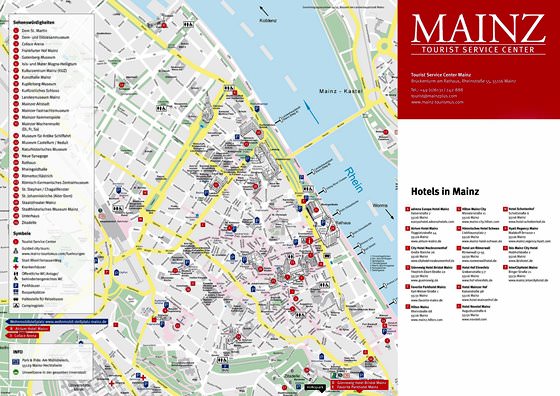 The actual dimensions of the Mainz map are 2729 X 1929 pixels, file size (in bytes) - 950338. You can open, download and print this detailed map of Mainz by clicking on the map itself or via this link: Open the map. 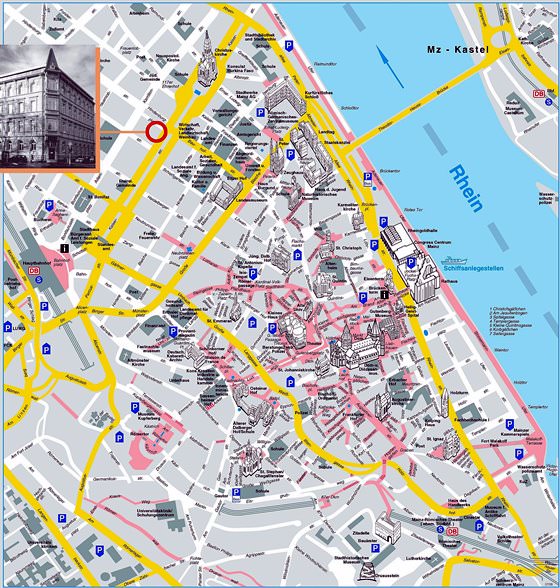 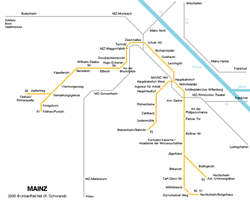 Thanks to the fact that a three-tier budget system operates in Germany, one can clearly follow the development of the economy. The income tax in the country is progressive; it makes from 19 to 45%. VAT for today is 19%. The budget revenues for the past years were, in average, about $1.7 trillion; the country's expenditures are about 1.59 trillion dollars. The public debt of Germany is 61% of GDP. Despite the progressing indicators of the country's overall economy, unemployment has been rising in Germany since the beginning of the 21st century. This is especially evident in the eastern part of the country. This is largely due to the increase in social payments. The GDP per capita for 2010 is $ 37 432. … Open

Search for services, infrastructure and sights on map of Mainz

Our guide chapters over Mainz

4. To rent a car one will need passport, driving license and a credit card with enough cash to cover the gage. Customers under 21 as well as those who drive a car for less than a year may be denied in renting. 5. One of the most popular transport means is a bicycle. City visitors may rent a bicycle in one of the numerous rental centers. No additional documents are needed to rent a bicycle, as a … Open

Escape quest club Exit Experience is the most popular centre of its kind in the whole city. Its visitors can choose rooms created on the basis of the game Fallout, literary works about Sherlock Holmes, the films "Charlie and the chocolate factory" and "the Great Gatsby". All rooms, storylines and quests are appropriately decorated, visitors are given 60 minutes to pass the quest. Be sure to visit the club Secret … Open

Festivals and events in Mainz

Connoisseurs of art and everyone else visiting Mainz in mid-June will be happy to know that this is the time when the city hosts the "night of museums"!. At this time, cultural institutions are open until late at night, thematic tours are held in the city, buses run on special routes so that everyone can see all the interesting events during this time. Moreover, you can see unique collections in many galleries and … Open

Mainz is not deprived of attractive men's clothing stores, among which Moos is especially worth highlighting. Despite the fact that it has a fairly high level of prices, there are always a lot of customers in the store, they are attracted to high-quality and stylish things. The store will appeal to those who prefer classic style, there is a large selection of elegant shirts and pullovers, the cost of the latter is … Open

Kids will appreciate the stay in Tierpark Mainz-Kastel, where you can meet animals that live mainly in the region. There are sheep, goats, ponies, roosters, rabbits and Guinea pigs. But there are also a few "exotic animals" - raccoons, turtles, monkeys. The most beautiful place in the zoo is a pond, which you can reach walking along the winding paths. Gonsenheimer Wildpark is a small but very spacious park which is … Open