Preparing your trip to Frankfurt am Main: advices & hints - things to do and to obey 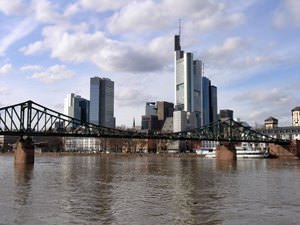 1. Frankfurt has a rather mild climate; fans of excursions and walks in the fresh air would find comfortable to relax there at any time of the year. The coldest month of the year is February, and the hottest one is August. It should be noted that both in winter and in summer rains are rare, so incessant rains and snowfalls won’t spoil holiday plans.
2. Summer is traditionally considered the high season; many travelers visit the city on the eve of Christmas holidays. At this time there are always public entertainment and colorful markets in Frankfurt.
3. Travelers arriving to the airport of Frankfurt can get to the city center by train. In this case, the journey will take about 15 minutes; trains S8 and S9 go to the downtown. An alternative to electric trains is a bus, but in this case the trip can be a little bit longer.
4. Travelers who arrive by car have to consider that during the daytime traffic along major highways is always difficult. A great part of the city is considered a pedestrian area closed for drivers; in particular, the vehicle can’t drive through Zeil shopping street.
5. Public transport in Frankfurt is represented by an extensive network of trams and buses; the city has the subway too. It’s worth noting that some buses run through the city even at night, but the traffic interval at night is pretty large. Copyright www.orangesmile.com
6. One of the best ways to get around the city is a bike; you can rent it at one of the rental centers. Deutsche Bahn centers are considered the most popular; they are situated at main crossroads of the city and near railway stations. The average cost of renting two-wheeler is 15 euros per day.
7. Through the main streets of the city tourists can walk safely even late at night. You shouldn’t explore remote areas of Frankfurt and visit desolate places at nights, as it is likely to become a victim of robbers.
Guide to Frankfurt am Main sightseeing - things to see and to visit
Frankfurt can be truly called one of most stylish and modern cities of the country. Numerous conferences, exhibitions, seminars and fairs take place here every year. Frankfurt has become the …

Open
8. You have to pay for goods and services exclusively in euros, as any other currency won’t be accepted here. Travelers are advised to exchange money at home; anyway, a number of local banks have exchange services.

Preparing your trip to Frankfurt am Main: advices & hints - things to do and to obey You can re-publish this content with mandatory attribution: direct and active hyperlink to www.orangesmile.com.
Frankfurt am Main - guide chapters 1 2 3 4 5 6 7

What to visit being in Frankfurt am Main - unique sights

Distance from Frankfurt am Main center - 25.3 km.
The building roof is a huge green terrace with plants and flowers, the comfortable recreation zones for sunbathing. The residents of the multi-apartment complex independently cultivate 'the green component' of their dwelling. In accordance with the contract, the tenants in whose dwelling or on the balcony the trees and flowers grow are obliged to care for them. So one of the main conditions of the stay is in the original house. … Read further

Distance from Frankfurt am Main center - 41 km.
In total, visitors can see more than 900 trains and the number of cars exceeds 14000. The model of the railway is illuminated by 300000 tiny flashlights. Around 200000 miniature trees have been planted around the huge layout and the same number of people's figures havebeen installed. This model of the railway is the world's largest one of its kind. … Read further

Photos of Frankfurt am Main

Tips for the cities around Frankfurt am Main

Offenbach
2. The city of Offenbach has widely adopted the system of cashless transfers. That is why tourists should not keep substantial sums of cash by oneself. International credit cards are accepted in most large shopping centers, super markets, filling stations and restaurants. 3. The city has a developed system of public transport. Buses are cruising the city from the early morning ... Open »
Mainz
2. Upscale shopping centers and luxury boutiques accept international credit cards however setting off to the small shops and boutiques as well as to the markets of Mainz one should be backed up with enough cash. The purchases are most profitably made in national currency as the currencies of other countries may simply not be approved for payment. 3. The city is better be ... Open »
Mannheim
2. The utility supplied voltage is 220V. All the hotels and inns are equipped with European standard sockets. During preparation for the journey one should check all the appliances taken in the tour for compatibility as well as buy necessary adapters and connectors. 3. Prudent tourists will love local supermarket stores Karstadt, Kaufhol and Hertie. There the tourists ... Open »
Koblenz
2. Banks and other government agencies are working on weekdays, from 8:00 - 8:30 am to 5:00 – 6:00 pm. During the day, small lunch break is possible. Some large banks can operate on Saturdays, but the time will be reduced significantly. 3. Almost all major shopping centers, restaurants and hotels accept service payment with credit cards. They deal with cards of ... Open »
Wurzburg
2. There are several car rental offices in the city. In order to rent a car, you will need to have a driving license of the international standard. Your driving experience must be at least a year, and the age of the renter must be at least 23 years. 3. Motorists should remember that there is a strict system of traffic rules in the city. Any violation is due to heavy fines. ... Open »
Kaiserslautern
2. Kaiserslautern is perfectly suitable for navigation by bicycle and other means of transport. Public transport works in strict accordance with the schedule, and taxi services will please vacationers. However, it may not be easy to drive a car in the center of the city. As old streets are narrow, there are almost no large parking lots in the center of Kaiserslautern. Traffic ... Open »

Travelling to Frankfurt am Main - advices and tips. What should be provisioned in advance, the rules you might want to follow, and the things you better avoid doing in Frankfurt am Main. We help you to make your trip smooth and easy, with no unexpected surprises.