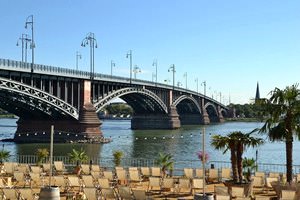 This review is a great opportunity to look at architectural landmarks of Mainz from a new perspective – namely, from the sky. Click the video to enjoy a 3D flight over the architectural ensemble of Mainz and to look at the most interesting landmarks in detail - at Mainz Cathedral, Staatstheater Mainz, Holzturm, Mainz Hauptbahnhof, Theodor Heuss Bridge and many others. Below you will find the most amusing historic facts and professional photographs of every famous sightseeing in Mainz. 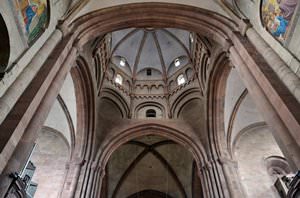 Facts:
» It’s truly impressive how architects of the first millennium were able to erect houses of great height and scale. The building is 116 meters long, and the tower is 83 meters high.
»  It took more than 200 years to build the cathedral (975-1239), which was connected with the fire that destroyed the structure and looting during wars.
»  The cathedral is faced with red sandstone which contrasts with the chapel built of light blocks.
»  There are sculptures installed along the walls. The first one was put there in the 11th century. Today the statues form a kind of overlap in front of the entrance.
»  After the building was consecrated, St Martin and St Stephen became the patrons and defenders of the settlement, which is indicated in the name of the cathedral.
»  For centuries, the Mainz Cathedral was the place where the nobles chosen for reign were crowned. A ceremony of admission to the Order of Chivalry was also held here.
»  The interior decoration is luxurious. The walls are decorated with frescoes depicting the life of Christ. The dome is supported by majestic columns, beside which the tombs of the church’s priests are placed.
»  The font in which the rite of baptism was performed was made in the 14th century. 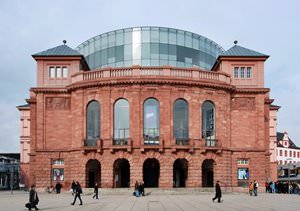 Facts:
» The cultural institution was built in the 19th century. The architectural ensemble consists of two houses. They are connected by an underground and pedestrian crossings.
»  The main building (1829-1833) cost 280,000 guilders while the annual treasury budget was 300,000.
»  In 1942, the large hall was destroyed by shells. After the war, it was restored.
»  The concert venue could now accommodate a thousand spectators. The small hall was built in 1997. After the last reconstruction, the interiors were changed – they became more spacious. A restaurant appeared on the roof. The construction is covered with a glass dome.
»  Opera and ballet performances, concerts, children’s puppet theater plays, and musicals take place on the stage of the State Theater. During carnival festivities, masquerade shows are held here. During the Christmas holidays, Christmas celebrations are organized for children.
»  Every year, up to 500 diverse performances take place on the theater stage. The theater ensemble are famous for their original productions. Theater aficionados from all over Europe come here to see the actors performing. 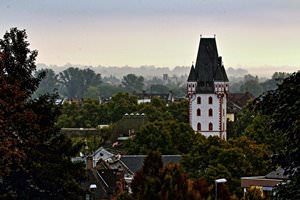 Facts:
» In ancient times, the settlement was fenced off from enemies by defensive fortifications. Only a part of the defense managed to survive to this day.
»  The Wood Tower (Holzturm) was part of the city wall in the 15th century. Everyone used to enter the city through the massive arched gate.
»  Natural stone was used in the construction of the tower. The high-rise building is Gothic in style. High rectangular arch-framed windows give a more sophisticated look to the building. The corners of a four-pitched dome have turrets ending with sharp spires.
»  When the old fence was dismantled, the tower was left and later restored.
»  Although it’s called “wood”, it’s not made of wood. It got its name from a woodyard situated nearby. There were times when prisoners were kept inside. According to a chronicle, the robber Yan Kulachny was detained here for several months awaiting the death sentence. He robbed not only local residents, but also the neighboring areas.
»  During the war, the tower was damaged by shells. But its original look was fully recreated. The monument of a bygone era still impresses people with its masterful architecture. 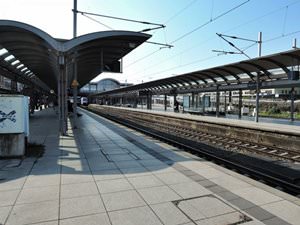 Facts:
» The city railway station is a network of branching railroads.
»  The second level of the building is especially busy. An indoor gallery with small shops stretches above the platforms. You can go down by elevator or use the escalator. A baggage room is situated on the first floor.
»  Up to 80,000 travelers depart from the station every day.
»  The station is considered one of the busiest ones in terms of the number of passing trains. 440 suburban trains and 78 long-distance trains depart from here daily.
»  For the sake of passengers’ safety, video cameras with a face recognition feature are installed all over the station.
»  The central station was built in 1884. Sandstone of a bright shade was used in the construction and cladding of the building. The entrance is decorated with relief images of railroad tracks.
»  The station building used to be the longest one in Europe – 14,000 square meters. The roof was supported by 60 columns. The station continued to operate despite the bombing.
»  It was last renovated in 2003. 114 million euros was spent on the construction. 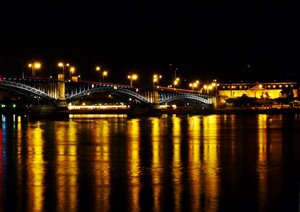 Facts:
» The 475-meter bridge was built to connect two cities. It was erected on the site of a preserved Roman passage. Its foundation dates from the year 27 AD.
»  The pontoon was completed in 1885. The construction cost 3.6 million gold marks.
»  The structure has an arched shape. The arches are covered with an unusual mosaic. Four robust sandstone pillars are placed in the Rhine. The widest span consists of five sections. It stretches for over 102 meters.
»  As a result of the reconstruction performed in 1930, the road was expanded almost to 24 m. There are four lanes for motor vehicles (two lanes in each direction) and bike paths along the edge of the highway. In the 1990s, a pedestrian zone appeared here.
»  The retreating German troops blasted the crossing, but it was restored in the postwar period.
»  The bridge is named for Theodor Heuss, the head of the Federal Republic of Germany.
»  The last renovation of the bridge (1995) cost 139.5 million marks.
»  Both locals and tourists enjoy walking here in the evening when the construction is lit by elegant lights. It has a beautiful view of the river and the surrounding area. On Midsummer Day, a marathon is held here.

Facts: » The gray building looks like a geometric shape among the historic monuments. It was erected in the 1970s. The modern building differs from the neighboring ones in its strict and simple architecture.
»  Danish architects took part in designing the construction. Several thousand tons of Swedish marble stone was imported during the construction.
»  Today, the city hall is located here. In the 15th century, the local municipality was situated in the building.
»  The construction was seriously damaged during bombing, and it didn’t make sense to restore it, so a new one appeared here.
»  The city hall is not just a building used for governing the city, it is also a cultural center. Besides the administrative offices, the new building has a cultural institution that organizes various exhibitions, musical performances, and meetings.
»  The interior is decorated in a retro style: leather upholstery, wood panels.
»  An unusual installation by an avant-garde sculptor is placed before the Council. The street sculpture is fan-shaped which gives the illusion of movement.

Facts: » Three fragments remained from the defensive city wall built in the Middle Ages: the Alexander, Iron, and Wood Towers.
»  The tower was named iron not because of its properties, but because it was located near the point where metal products were sold.
»  The white stone construction is framed by red brickwork. It looks festive, not threatening, as befits a rampart. The arched tower passage had served as the main entrance to the settlement for many years.
»  There are two sculptures of predators by the side facing the river. The lions hold prey in their paws. One animal holds a ram, while the other one grasps a mythical dragon. The fearsome lions have a symbolic meaning: one shows the power of the church rule, while the other embodies the secular power.
»  In the 15th century, six floors were added to the tower.
»  Until the 19th century, prisoners were kept in the building.
»  The building was destroyed during the artillery raids. The historical 11th-century building was reconstructed according to the surviving technical drawings.
»  Nowadays, the building is used by artists, writers, and music performers. Different exhibitions are often held here.

This guide to architectural sightseeing in Mainz is protected by the copyright law. You can re-publish this content with mandatory attribution: direct and active hyperlink to www.orangesmile.com.
Mainz - guide chapters 1 2 3 4 5 6 7 8 9 10

Build your walking routes in Mainz on the landmark map

Architectural landmarks in the regions around Mainz

Frankfurt am Main
Europaturm – the radio and TV tower was built in five years in 1979. Its height was 331 m and then it was the highest in Germany. The diameter in the upper part was 59 m - this is a world record for such structures. The foundation of the tower lies at a depth of 18 meters. At the top of the tower there was a restaurant and a disco. After 1999, they were closed and visitors' access was prohibited. In 2004, the antenna was completely ... Open »
Mannheim
The water tower built in 1889 is one of the landmarks of the city. The high-rise is 60 meters tall. The base is 19 m in circumference. The construction was designed to collect potable water. The structure could hold up to 2000 m³ of liquid. The building was last renovated almost a hundred years after it was built. Although the construction is intended for practical use, it is also considered to be of architectural value. The building ... Open »
Trier
The cathedral dates back to 320. The Roman warlord Constantine ordered to build a cathedral. The Empress sacrificed her palace for the construction. There are still its remains in the foundation. The Normans almost destroyed the building in 882. It started to be restored in 1196. Originally, the building was built in the Roman style. At the beginning of the 18th century, clergymen decided to add baroque elements to the ... Open »
Cologne
Cologne Cathedral is one of the world's most famous Roman Catholic cathedral built in the Gothic style. The cathedral reaching a height of 157 meters is ranked third in the list of the highest churches in the world and listed as a World Cultural Heritage. Construction of the temple was carried out in two stages, in 1248-1437 and in 1842-1880. The temple was rebuilt and restored several times. Near Cologne Cathedral there are ongoing ... Open »
Stuttgart
The construction of the New Palace was initiated by Duke Charles Eugene of Württemberg who intended to turn Stuttgart into the French Versailles. It began to be built in 1746 by Italian architect Matteo Retti. Five years later, he was replaced by French architect Philippe de La Guêpière. It took a long time to erect the palace, and the construction was ceased several times. The building was completed in 1807 just by the arrival of Emperor Paul ... Open »
OrangeSmile.com - online travel reservation expert providing reliable car rental and hotel booking services. We feature more than 25.000 destinations with 12.000 rental offices and 200.000 hotels worldwide.
Secure Server