Detailed hi-res maps of Kassel for download or print 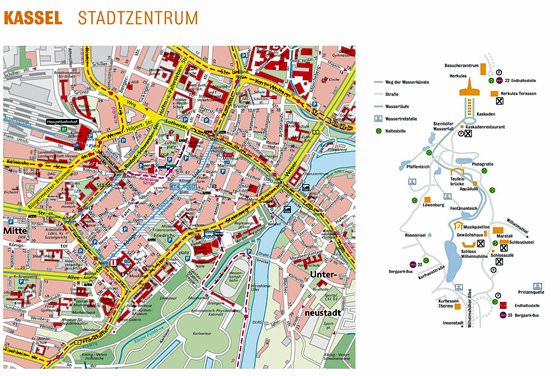 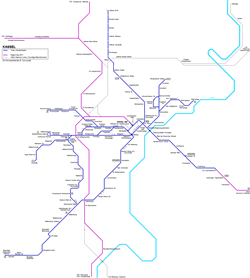 The automotive industry is considered to be a real pride of the country. It is Germany that has been for many years in the top three of the world's leading automotive countries. Its volume is inferior only to the production of cars in Japan and the United States. Despite the fact that according to economic indicators in the automotive industry Germany is catching up with China, German cars deserve respect in the world. In Stuttgart, the country's largest automobile company Daimlerchrysler is located. Its annual income is about 200 million dollars. The assets of the world famous company Volkswagen are in Wolfsburg. The annual income of this company is $135 million. BMW is based in Munich; its annual income is slightly less and makes about 65 million dollars. … Open

Search for services, infrastructure and sights on map of Kassel

Our guide chapters over Kassel

3. Don’t forget that it is prohibited to throw litter on the streets or in public areas. It is a mistake to think that a small piece of paper or a cigarette stub will be left unnoticed. Even if a policeman doesn’t notice this, there can always be a pedantic passerby who will notify the authorities about the breach. This situation is likely to result in a fine that can be up to 100 euro. 4. Residents … Open

There are several attractive antiquity shops on the central streets of Kassel and the historic district. Antiquariat & Verlag Jenior has an interesting design and a variety of different items available for sale. Many tourists visit it like a museum. It is possible to purchase virtually everything here, from inexpensive old trifles to true masterpieces and antique jewelry. The selection of items is simply … Open

One of the most famous religious sites in Kassel is the Saint Martin’s Church, which was founded in the beginning of the 14th century. For hundreds of years, the church was rebuilt and supplemented with new elements. So now, its appearance is an amazing combination of different architectural styles. The last major reconstruction took place in the 50s of the last century, during which specialists were able to … Open

Traditions and mentality of Kassel

An ancient city with a thousand-year-long history, Kassel never grows old. There is a reason for this – Kassel University that is well-known in the country. The university opened its doors for future teachers, art specialists, ecologists, architects, and engineers for the first time in 1971. Every year, more than 23 thousand people study here. The university is famous for its approach to internship – students … Open

Taverne Odysseus is one of the most prestigious culinary establishments in Kassel. The luxurious hall of the restaurant is ideal for special occasions, and a huge choice of will please any visitor. The quality of service here is worth the highest praise, and attentive staff of Taverne Odysseus will help to keep any celebration at the highest level. Travelers, who want to taste Greek cuisine and enjoy relaxed … Open

Vacationers with children will also find it interesting to visit Zoo am Rammelsberg to see owls of different types, storcks, flamingoes, giant snakes, and even white monkeys. Tourists may also find it interesting to visit the local planetarium, which is, by the way, the largest in Hesse. Local karting center will let everyone feel like true racers. Children below 14 must undergo a special two-hour-long master class … Open