Detailed hi-res maps of Erfurt for download or print 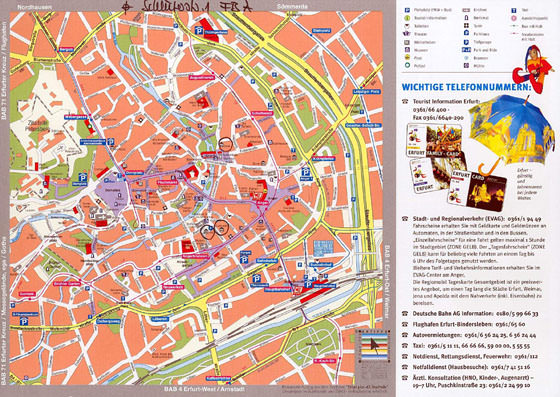 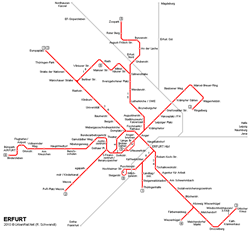 Search for services, infrastructure and sights on map of Erfurt

Our guide chapters over Erfurt

Main tourist activities are walking along colorful city streets and sightseeing of historical landmarks. There are also several shopping places in Erfurt. Krämerbrücke houses lots of souvenir shops. Various shops and store also located at Anger, Marktstraße, Schlösserstraße and Bahnhofstraße. Huge Anger 1 shopping mall is located in the very city center and you can easily spend entire day walking around it. If … Open

Erfurt is the real boon for fans of German food. There are countless restaurants and small stands offering famous German sausages, Bratwurst. It's not widely known that world's famous Thuringer Bratwurst are made in Erfurt. Bratwurst are sold at nearly every turn, thus tourists have a unique chance to try this delicious product at its fatherland. As for national specialty restaurants, Tolle Knolle and Erfurter … Open

The special historical city is the old citadel of Petersberg. It was built in the baroque style and has been perfectly preserved throughout the centuries. Among the monuments of European defense architecture preserved in Europe, the citadel holds one of the leading positions. At one time, the Benedictine monastery was located here. Today, you can take an excursion around the entire territory of the citadel. … Open

3. Public transport in Erfurt is represented by an extensive network of buses and trams cruising throughout the city. The cost of a trip by public transport is about 1.5 euros; anyone can buy a ticket for one day, which costs 5 euros. 4. Tourists planning a rich program of rest are recommended not to go for a trip in June, as this month is considered as the rainiest. The warmest weather prevails in July and … Open

Old University and lots of other historical buildings located along Michaelisstrasse street turn it into a landmark itself. Another attraction is the Krämerbrucke Bridge over Gera River built early in 14th century; it is one of the longest populated bridges in Europe. There are 32 houses on it and Ägidienkirche church that has been open for few centuries already. The Wartburg Castle is one of many historical places … Open

Among the attractions of the city we should definitely mention a museum with an oak tree growing in his heart. In order to inspect the exhibition you will need to walk on the spiral staircase that is built around the tree. The steps of the Cathedral Mountain are often used as a stage, and the city itself is an amazing backdrop for performances. The Bridge of Shopkeepers is also unique and famous for its … Open

Maps of Thuringia
Handicrafts and local food, Christmas accessories and decorations, toys and Christmas cakes can be found there. The latest is main festive symbol of the region. According to historical data, first, muffins for Christmas have been baked in the first half of the 14th century, since then they have remained the most popular holiday treat. At Christmas time, foreign guests will be ... Open »
Maps of Halle an der Saale
Mid-April in Halle is marked by such an event as Doppeltes Burgfest, which is sure to delight all fans of medieval-style festivals. Giebichenstein Castle serves as the venue. There is a fair in the lower part of the castle, circus performances of equilibrists, and, of course, tournaments between knights encased in armor. The upper part hosts the main events - theatrical ... Open »
Maps of Leipzig
No less interesting is the festival dedicated to classical music called Bachfest Leipzig. It is held at the beginning of the first summer month and lasts two weeks. On these days, Leipzig's most famous religious attraction - Thomaskirche - becomes the main venue for wonderful music concerts with the participation of chamber orchestras performing classical works of genius. The ... Open »
Maps of Kassel
The lifestyle of residents of Kassel and its neighborhoods is provincially calm and settled. Everyday routine is well-thought-out. Simplicity and minimalism are the key characteristics of the design here, and this applies to both streets and inner décor of houses. Rules are an essential part of the local lifestyle. For example, neighbors discuss their rights and obligations. ... Open »
Maps of Magdeburg
Street performers and jugglers entertain crowds on the streets for several days. A significant part of the festival program is focused on children. Some of the most interesting are performances organized by the local puppet theater. During the festival days, Magdeburg opens a medieval market where visitors can buy beautiful historical costumes in the national style, ... Open »
Maps of Braunschweig
In early June, you can witness such an event as Braunschweiger Masch und Schützenfest. It takes place in the best suitable place - Schützenplatz. This contest is free for everyone who've decided to attend the event and see such a grand spectacle. In addition to the entertainment program, the audience is invited to drink the divine foamy drink. Organizers don't forget about ... Open »
OrangeSmile.com - online travel reservation expert providing reliable car rental and hotel booking services. We feature more than 25.000 destinations with 12.000 rental offices and 200.000 hotels worldwide.
Secure Server