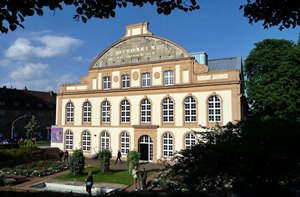 Kassel is the 40th most populous city in Germany. According to the official data, the population of Kassel is approximately two hundred thousand people. Someone living in a big city would label Kassel as “a provincial town”, but you will never hear this from an indigenous person. In the opinion of local people, the city has lost its provincial atmosphere long ago (the city hosts many internationally famous events, including Documenta art exhibition and the Kassel Documentary Film and Video Festival; moreover, it is the location of a well-known university), but behavior and lifestyle of locals prove the opposite. On weekdays, when there are no festivals and celebrations, Kassel is a calm and peaceful place that is similar to many small cities.
Guide to Kassel sightseeing - things to see and to visit
The city is located in the center of Germany. Kassel traditionally attracts tourists by interesting sights, old palaces, spacious parks, numerous museums and wide choice of excursion routes. …

Open
As a rule, residents of Kassel work until 4 pm. It is hard to find bread at this time, only some remaining cakes that are accidentally not sold out since the morning. By the way, the remaining unsold bread is given away to the poor at the end of the day. On the next day, shops sell only the bread made earlier in the morning. It is hard to see locals on the streets of the city during the daytime – all of them start working early. Until 4 pm, there are mostly tourists and immigrants on the streets of the city. Many immigrants are jobless, so they get social security and have free time to spend outside. When Germans return from work, immigrants usually disappear from the streets of Kassel.
According to the official statistics, the share of immigrants who live in Kassel permanently is 12% of the total population. There are many Turkish people, Arabs, Ukrainians, and Russians. There is even the so-called “Turkish Quarter” in the city. It is not the most prestigious neighborhood in Kassel, so many immigrants prefer to move to more popular parts of the city when they have a chance. Germans treat immigrants with tolerance and are friendly rather than disdainful when dealing with them. Anyone who needs help will certainly get it in Kassel because locals will not leave others in trouble. Residents of the city are used to guests and try to respect them even if they do it with typical German restraint. Copyright www.orangesmile.com
Cuisine of Kassel for gourmet with top restaurants and cafe
In addition to truly rich choice of German food restaurants in Kassel feature different cuisines of the world. Fans of exotic food and fans of traditional dishes, budget travelers and …

Open
Starting from 1955, Kassel has been the capital of an internationally famous exhibition dedicated to modern art – Documenta. The event is held once in five years. Originally, the exhibition took place at the art museum, but already in 1977 the event became too large for one venue and expanded to the streets of Kassel. The number of exhibits increased, and artworks became bigger in size (some of them are dozens of meters in length). Every Documenta is more and more creative, amazing visitors with the courage of artworks and a variety of genres (besides paintings and sculptures, visitors can see video and sound installations, as well as the most creative advertisements). Documenta stopped being “a museum for 100 days”, evolving into “100 days of events”. Needless to say, the exhibition brings hundreds of thousands of guests to the city. 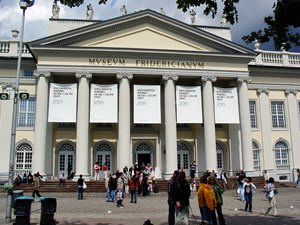 The lifestyle of residents of Kassel and its neighborhoods is provincially calm and settled. Everyday routine is well-thought-out. Simplicity and minimalism are the key characteristics of the design here, and this applies to both streets and inner décor of houses. Rules are an essential part of the local lifestyle. For example, neighbors discuss their rights and obligations. Local rules can be very detailed and can cover such aspects as types of trees that can be planted near buildings, parking spaces, and even how to cut a lawn. Some residential buildings prohibit the use of washing machines at night. Needless to say, local dog owners always clean up after their pets (there are even special machines with disposable bags for collecting the excrements). At the same time, it is allowed to enter shopping centers with dogs, if the dog is on a leash of course.
Excursion over cultural sights of Kassel - 'must visit' points of interest
Kassel is a city with rich history and cultural traditions. A walk through the streets of the city can become an exciting adventure, because you will see interesting sights almost at every …

Open
The absence of 24/7 shops is one of the characteristics of a provincial European town. Tourists should also not forget that shops in Kassel are closed on Sunday. Local people always buy everything they need in advance. By the way, local supermarkets mostly use paper bags rather than plastic ones. This is environment-friendly, same as sorting the garbage – everyone in the city sorts the litter they produce. Even prosperous Germans recycle plastic. Of course, they do that not because of money but in order to save the environment. If you have a different opinion, locals will simply not understand you. 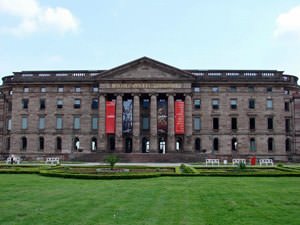 Despite their hardworking nature, Germans know how to have fun. Zissel is the most popular celebration in Kassel. This event is dedicated to the birthday of the city. It is an annual celebration that takes place in August. The festivities start on the first Friday of the month and end on Monday. On the first day of the holiday, locals work only until noon and then join the celebration that usually includes performances of local bands, delicacies sampling, exciting attractions, and interesting shows. The traditional beauty contest is one of the most popular events on the holiday’s schedule.
Your active city break in Kassel. Attractions, recreation and entertainment - best places to spend your day and night here
If you ask about landmarks to see in Kassel, then anyone – a local or a tourist who has ever visited this German city at least once – will give the same answer: Bergpark Wilhelmshöhe. …

Open
An ancient city with a thousand-year-long history, Kassel never grows old. There is a reason for this – Kassel University that is well-known in the country. The university opened its doors for future teachers, art specialists, ecologists, architects, and engineers for the first time in 1971. Every year, more than 23 thousand people study here. The university is famous for its approach to internship – students start internships already during their first years of studying in Kassel unlike many other universities around the world.

This guide to traditions and festivals in Kassel is protected by the copyright law. You can re-publish this content with mandatory attribution: direct and active hyperlink to www.orangesmile.com.
Kassel - guide chapters 1 2 3 4 5 6 7

Cathedrals and basilicas near Kassel
♥   Dom-Basilika St. Petri („St. Petri-Dom”), Fritzlar, 26 km from the center. On the map

Survived castles around Kassel
♥   Castle 'Burg Ludwigstein' , 28.5 km from the center. On the map 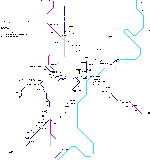 Colors of Kassel in photos

Traditions and festivals in cities around Kassel

Lemgo
For several days, the central city square turns into a huge open-air stage on which solo artists and music bands perform non-stop. The festival is participated by performers of various musical genres, which attracts a very wide audience. Such a great festival wouldn't be complete without gastronomic entertainment. Food stalls and open-air kitchens sell the most popular ... Open »
Thuringia
Handicrafts and local food, Christmas accessories and decorations, toys and Christmas cakes can be found there. The latest is main festive symbol of the region. According to historical data, first, muffins for Christmas have been baked in the first half of the 14th century, since then they have remained the most popular holiday treat. At Christmas time, foreign guests will be ... Open »
Bielefeld
The ancient city of Bielefeld was founded at the beginning of the 13th century, so there’s no wonder why it has a range of interesting peculiarities. For example, many current names of streets and landmarks are connected with events in the past. Local people often call Bielefeld “the Sunny City”. This nickname is not random. In the Middle Ages, Bielefeld was a famous ... Open »
Hannover
During a year Hanover becomes the location of several large music festivals. The local AWD-Arena is considered the major concert venue of the city. A series of interesting events is organized during the holiday of Ascension. This is traditionally the time for a jazz festival that attracts many visitors and jazz bands. The Festival of Shooters is one more interesting event. It ... Open »
Braunschweig
Arriving in Braunschweig, you should be prepared for some restraint of the local residents. The reason is their mentality - they do not let strangers get into their souls and will not tell the whole story of their lives to the first person they meet. However, if any tourist needs help, they will gladly give a helping hand. And it's highly appreciated if the traveler speaks ... Open »
Gummersbach
Three times a year a flea market, or Trödelmarkt, opens in Gummersbach. Here you can buy all kinds of interesting and unique things made by the best local craftsmen. This happens at the beginning of May, July, and August. The venue is HIT-Markt, which is on 223 Kölner Straße. Besides doing shopping, master classes, consultations and seminars are also available to visitors ... Open »

Cityguide on traditions, mentality and lifestyle of people in Kassel. Learn the best periods to visit Kassel to discover its soul - authentic festivals, events and celebrations. We will also reveal the interesting habits, attitude towards the world and to tourists in Kassel.