Video of flights over top monuments of Hamburg in HD format.
Use 'Full Screen' mode.
The main landmarks, such as St. Michael Church, Imtech Arena, Flak tower, and Bismarck Monument, attract thousands of visitors, who come to Hamburg from different parts of the world every year. Hamburg is incredibly rich in absolutely stunning landmarks and important historic sights. St. James Church, are true masterpieces of architecture and architectonics at the international level. It’s time to look at every landmark of Hamburg in detail from an unusual point of view – interesting facts with hi-res photos, enriched with a virtual flight over 3D copies of all the architectural monuments. 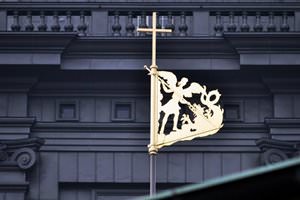 Facts:
» The St. Michael Church is the hallmark of Hamburg. The temple built in Late Baroque style and dedicated to the Archangel Michael is the main Protestant church of the city.
» Above the main portal of the temple there is a large bronze statue of the Archangel Michael defeating the devil.
» The belfry of the St. Michael Church reaches a height of 132 meters; it’s the second highest bell tower in Hamburg.
» The tower clock of the bell tower is the largest in Germany.
» There is an observation deck at 106th meter of the belfry, which you can reach via lift or on foot overcoming 453 steps. 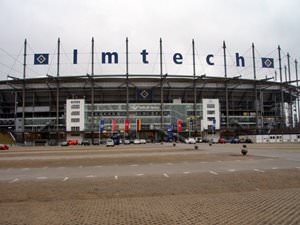 Facts:
» Imtech Arena is the football stadium in Hamburg, Germany, which is the home stadium of Hamburg FC.
» The stadium has capacity of 57,000 spectators.
» The modern stadium was built on the site of the old stadium and opened in April, 1998.
» In early 2004, UEFA included the stadium into the exclusive club of five-star stadiums.
» In September 2007, the general director of Hamburg FC decided to begin construction of the cemetery for the fans of the club located near the stadium. The opening of the cemetery took place in September 2008; the entrance to its territory is designed as goalposts. 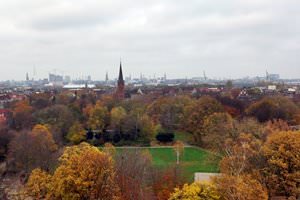 Facts:
» The Flak tower is the big ground concrete bunker armed with artillery defense, used by the Luftwaffe during World War II in order to protect the strategically important cities of the aerial bombardment by Allied corps.
» Besides Hamburg, such anti-aircraft towers were built in Berlin and Vienna.
» The Flak tower in Hamburg is the square seven-story construction of reinforced concrete. The height of buildings to the gun-sites is 39 m.
» Heavy anti-aircraft guns were located in the upper part of the building in special concrete towers.
» Garrison of anti-aircraft tower consisted of 8,000 people. In addition to the garrison, the tower could shelter up to 18,000 civilians, so the building also served as an air-raid shelter. 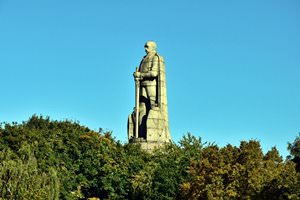 Facts:
» The Bismarck Monument is one of the most famous sights of Hamburg.
» The monument was created by the Berlin sculptor Hugo Lederer in 1903-1906.
» The total weight of the giant granite sculpture of the chancellor Otto von Bismarck, whose height is almost 15 meters, is about 650,000 kg.
» The Bismarck Monument reaches a height of almost 35 meters and is considered one of the tallest monuments in Germany.
» The pedestal under the 19-meter figure of the Iron Chancellor is decorated with bas-reliefs depicting scenes from German history.

Facts: » The St. Nicholas Church is the former neo-gothic Lutheran Church of Hamburg, which is now in ruins.
» The church was badly damaged during the World War II; only a tower of 147 m has survived.
» After restoration in 1990, the church has become a memorial to the events of the WWII.
» To the date, this attraction of the city is the second tallest building in Hamburg.
» The pavilion near the tower houses the small museum with a collection of documents that describe the history of the church; the basement of the church is occupied by the wine museum.
» The top of the church is equipped by an observation deck under the spire, which offers magnificent view of the city. The observation deck can be reached by elevator.

Facts: » The St. James Church is one of the most beautiful churches of Hamburg.
» The St. James Church was built back in the 12th century.
» The church is notable for its 125-meter tower.
» The shrine is also known as the Hamburg church with the largest ancient organ. The pipe organ installed in 1693 is the largest baroque organ in Northern Europe featuring 60 registers and 4 thousands of pipes.
» The church is dedicated to Saint James the Great, one of the first disciples of Jesus.
» Three remarkable medieval altars: the altar of Holy Trinity, located in the main choir, the altar of St. Peter in the first south aisle, and the altar of St. Lucas in the second south aisle are attention worth.

CONTINUE - PART II »»
This guide to architectural sightseeing in Hamburg is protected by the copyright law. You can re-publish this content with mandatory attribution: direct and active hyperlink to www.orangesmile.com.
Hamburg - guide chapters 1 2 3 4 5 6 7 8 9 10 11 12 13 14 15

Build your walking routes in Hamburg on the landmark map

Architectural landmarks in the regions around Hamburg

Bremen
The functioning cathedral is located in the city center and belongs to the church that combines Lutheran and Reformist religious movements. The chronicles say that St. Peter Cathedral started to be built in the 9th century. Finally, it was completed in 400 years. Such a long process is connected with the historic setting. There is a 100-meter tower on the south side of the building. 265 steps lead to the top of the observation platform. ... Open »
Hannover
The New Town Hall was built at the beginning of the 20th century. With its elegant exterior, it looks like an ancient castle. It was constructed on the marshland, so the foundation of the building is supported by 6 000 beech piles. The opening ceremony was visited by the last Emperor Wilhelm II. Rooms, graceful staircases, and balconies are decorated with lots of sculptures and bas reliefs. In the main domed tower, there is an observation ... Open »
Magdeburg
The cathedral is named after Saints Catherine and Maurice. There used to be a basilica here. After the fire of 1209, the archbishop commissioned the construction of a new cathedral. Having travelled a lot, he was aware of the popularity of Gothic and was eager to create a Gothic church too. It is now considered one of the oldest buildings of such style. The construction lasted for over three hundred years and was completed in 1520. ... Open »
Berlin
Brandenburg Gate is the only surviving city gate in Berlin. Decoration of Brandenburg Gate was designed by Johann Gottfried Schadow. He also designed six-meter quadriga controlled by the goddess Victory. After winning Berlin, Napoleon ordered the chariot to dismantle and carry him to Paris. After the victory over Napoleon, goddess Victoria returned to Berlin and got the Iron Cross. During World War II, the Brandenburg Gate was badly damaged ... Open »
Copenhagen
A legislative body of the Copenhagen Municipality has been located in the city hall since 1905. It's the sixth building since it was first built. The previous ones were either destroyed by fire or fell into decay. The first building dates back to 1479. The modern building is an example of Scandinavian architecture in the style of Nordic modernism. It’s the highest construction in the city – almost 106 metres. There’s a viewpoint which ... Open »
OrangeSmile.com - online travel reservation expert providing reliable car rental and hotel booking services. We feature more than 25.000 destinations with 12.000 rental offices and 200.000 hotels worldwide.
Secure Server