«« BEGINNING - PART I
Video of flights over top monuments of Hamburg in HD format.
Use 'Full Screen' mode.
Let’s move further. The upcoming famous architecture monuments of Hamburg that deserve to be mentioned are Kunsthalle Hamburg, Water tower, Hamburg Planetarium, St. Catherine Church, and Hamburg Townhall. An overview of interesting facts and a collection of photographs are available for each monument. In order to plan a route for your real-life sightseeing tour in Hamburg, use our interactive map of sights in of Hamburg that is available below this article. 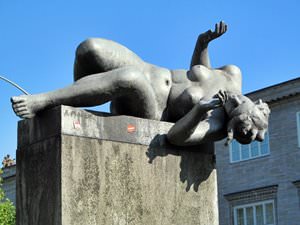 Facts:
» The Kunsthalle Hamburg is the art museum in Hamburg housed in two interconnected buildings located on the site of the ramparts that once protected the city.
» Total exhibition area of the museum is more than 13,000 m2.
» The main collection of the Kunsthalle Hamburg consists of German and French paintings of the 19th century.
» The museum also has a department of Old Masters and Modern Art.
» The whole complex of buildings is designated for contemporary arts.
» The Engravings Hall of the museum stores more than 100,000 documents. 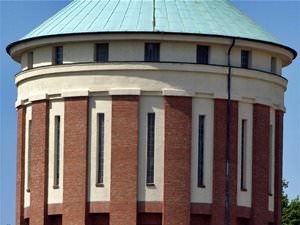 Facts:
» The Water tower of 57 meters in height was built in 1910.
» This magnificent building has served as a water tower until 1956; then the tower was closed and access to it was disabled.
» The tower was added to the list of historical heritage and stood at grass to 2005; then the famous architect Falk von Tettenborn started to rebuild a tower to convert it into the hotel.
» Since the building is in the heritage register, external changes during reconstruction were minimal.
» Currently reconstruction is finished, and 4-star hotel has found its place in the Water tower. The former has 17 floors, 226 rooms, restaurant, bar, 13 meeting rooms for conferences and business meetings, as well as a fitness room and a sauna. 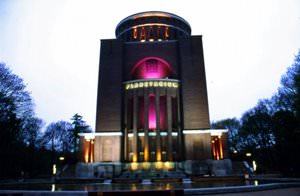 Facts:
» The Hamburg Planetarium is one of the oldest in the world.
» The planetarium is set in the water tower in the City Park. The building height is 60 meters.
» The building serves as a museum, a theater, and a lecture hall at the same time.
» Modern multimedia equipment is used by the planetarium to create extraordinary performances, during which it’s difficult to distinguish reality from the effects.
» At the 40-meter height around the perimeter of building there is an observation deck offering magnificent view of the city.

Facts: » The St. Catherine Church is one of the oldest religious buildings in the city. The first mention of the church dates back to 1256.
» The height of the spire of the temple is 115 m.
» The church was consecrated in honor of St. Catherine, the patron saint of sailors.
» Despite the fact that the church was severely damaged during the World War II, it has preserved a huge amount of sacred relics. Crucifixion by the local artist, Wilma Dedek, unique 14th century wooden sculptures and a huge 7-ton bell, cast in 1626 by Hans Neusel, are among them.
» Once well-known composers and organists, such as Johann Adam Reinke, Heinrich Scheidemann and Johann Sebastian Bach, have played the organ installed in the church.

Facts: » The new luxury building of the Hamburg Townhall was built in the 19th century on the site of an old burned-out building.
» Representatives of both legislative and executive authorities of Hamburg hold meetings there.
» The majestic town hall is decorated with huge statues of emperors on the front, and crowned with the baroque tower of 112 meters.
» The Hamburg Townhall has 647 rooms with luxurious interiors.
» The Kaiser Hall with rare leather wallpapers is of great interest.
» One of the halls houses the huge Golden Book with autographs by celebrities such as Bismarck, Charles de Gaulle, Princess Diana and Queen Elizabeth.

This guide to architecture monuments in Hamburg is protected by the copyright law. You can re-publish this content with mandatory attribution: direct and active hyperlink to www.orangesmile.com.
Hamburg - guide chapters 1 2 3 4 5 6 7 8 9 10 11 12 13 14 15

Plan your own tour over Hamburg on the monuments map

Search for architecture monuments of Hamburg on the map

Tours through neighbours of Hamburg

Bremen
The functioning cathedral is located in the city center and belongs to the church that combines Lutheran and Reformist religious movements. The chronicles say that St. Peter Cathedral started to be built in the 9th century. Finally, it was completed in 400 years. Such a long process is connected with the historic setting. There is a 100-meter tower on the south side of the building. 265 steps lead to the top of the observation platform. ... Open »
Hannover
The New Town Hall was built at the beginning of the 20th century. With its elegant exterior, it looks like an ancient castle. It was constructed on the marshland, so the foundation of the building is supported by 6 000 beech piles. The opening ceremony was visited by the last Emperor Wilhelm II. Rooms, graceful staircases, and balconies are decorated with lots of sculptures and bas reliefs. In the main domed tower, there is an observation ... Open »
Magdeburg
The cathedral is named after Saints Catherine and Maurice. There used to be a basilica here. After the fire of 1209, the archbishop commissioned the construction of a new cathedral. Having travelled a lot, he was aware of the popularity of Gothic and was eager to create a Gothic church too. It is now considered one of the oldest buildings of such style. The construction lasted for over three hundred years and was completed in 1520. ... Open »
Berlin
Brandenburg Gate is the only surviving city gate in Berlin. Decoration of Brandenburg Gate was designed by Johann Gottfried Schadow. He also designed six-meter quadriga controlled by the goddess Victory. After winning Berlin, Napoleon ordered the chariot to dismantle and carry him to Paris. After the victory over Napoleon, goddess Victoria returned to Berlin and got the Iron Cross. During World War II, the Brandenburg Gate was badly damaged ... Open »
Copenhagen
A legislative body of the Copenhagen Municipality has been located in the city hall since 1905. It's the sixth building since it was first built. The previous ones were either destroyed by fire or fell into decay. The first building dates back to 1479. The modern building is an example of Scandinavian architecture in the style of Nordic modernism. It’s the highest construction in the city – almost 106 metres. There’s a viewpoint which ... Open »
OrangeSmile.com - online travel reservation expert providing reliable car rental and hotel booking services. We feature more than 25.000 destinations with 12.000 rental offices and 200.000 hotels worldwide.
Secure Server