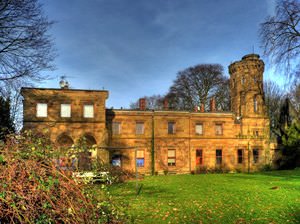 This review is a great opportunity to look at architectural landmarks of Bremen from a new perspective – namely, from the sky. Click the video to enjoy a 3D flight over the architectural ensemble of Bremen and to look at the most interesting landmarks in detail - at Bremen City Hall, Ubersee Museum, Weser Tower, Dorint Park Hotel, Fallturm Bremen and many others. Below you will find the most amusing historic facts and professional photographs of every famous sightseeing in Bremen. 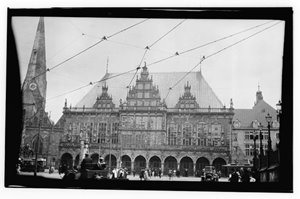 Facts:
» The medieval building of the City Hall is located in the city center. It was built in 1405-1410.
»  The building was reconstructed two centuries later. Its exterior seemed too modest for the state institution to the local authorities.
»  The foundation of the City Hall is 11 arches. It has 2 floors. The exterior is decorated with multiple sculptures and a convex relief. In the corners, there are statues of heralds in medieval outfits. The windows were broadened.
»  The exterior has been preserved since 1600. The new outbuilding was attached to the City Hall at the beginning of the 20th century.
»  Visitors are offered to view the halls with painted ceilings. The interior features furniture of precious woods.
»  The Parliament of the Legislative Assembly still sits and political meetings are held. There are also offices of government officials.
»  In the medieval wine cellar, you can taste beverages made according to old recipes. The range if worthy and includes over 600 wines. They were made of grapes. The collection started in 1723.
»  The Bremen City Hall is under the protection of UNESCO. 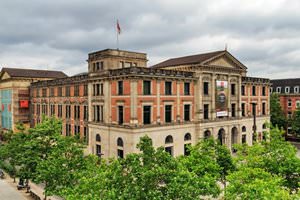 Facts:
» The fund contains 1.2 million exhibits, from stuffed birds and medieval items.
»  The Overseas Museum tells about history and ethnic group of human society.
»  Different items displayed will also tell you about city development and different periods of history. For example, when seeing some parts of exhibits, you will understand how people lived in the past centuries.
»  The sector presents not only holistic exhibitions, but also documents, bags with cotton, scales, parts of ships, and other items used in the past.
»  Integrated sectors are dedicated to natural habitats, cultural heritage, and trade relations.
»  Travelers will receive information about any place in the world: climate, time zones, and interesting attractions to visit.
»  Geographic sectors in the museum will see the features of any part of the world.
»  Organizers of events tried to show cultural features, natural factors on the exhibitions platform with a total area of 10 000 m2.
»  There is a big pool in the “Oceania” Sector. The representatives of this region dwell here. 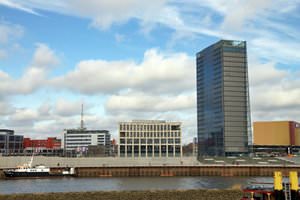 Facts:
» The Weser Tower is one of the highest city constructions. It was opened in 2010.
»  The skyscraper is located on the embankment of the namesake river.
»  Several port warehouses have been dismantled to build the tower. There had been a railway station before. That is why the tower is located far from the historic central district.
»  The 22-storey skyscraper is 82 m high. All the rooms have a total area of 18 000 m2. The Weser Tower is an office building too.
»  There are hotel rooms, a theater scene, and several cafes.
»  The skyscraper is recognized by the solid facade glazing. The foundation of the construction is reinforced concrete and steel.
»  The office skyscraper is built in modern style.
»  Wide windows have a magnificent view of the city surroundings.
»  The construction cost almost €70 million. The tower has a modern infrastructure that ensures comfortable living here.
»  The main tenant of the building is an energy company. It owns 13 floors. 8 hundred employees work on the upper floors.

Facts: » The five-star hotel complex is located in the city Burgerpark.
»  The spa center has a total area of 1 200 m2. In the wellness complex Park Bremen, fans of extreme can visit an ice grotto. There are steamy rooms with essential oils.
»  In the gym, there are various fitness accessories, from cardio-vascular machines to training with an instructor.
»  People can also visit a heated swimming pool. There is a sauna complex.
»  All the rooms of the hotel are characterized by a unique layout and interior. They are decorated with multiple drapes and decorative elements.
»  Some windows of the rooms have a view of the lake.
»  In the isolated area, connoisseurs of good cigars can have quality tobacco products.
»  The complex consists of 175 comfortable rooms with stylish design.
»  There are separate rooms for meetings or family celebrations.
»  Park Hotel Bremen is an aristocratic house of the 19th century with a garden and a lake.
»  Near it, there are the sports ÖVB-Arena, shopping pavilions, and a railway station.

Facts: » The drop tower, or Fallturm Bremen, is a place for scientific experiments. The 146-meter building belongs to the local university. It was founded in 1980.
»  The Center of Applied Space Technology studies gravity. It is the only such science laboratory in Europe.
»  Experiments on space technologies and devices are conducted here. Its workers conduct theoretical researches based on fundamental science. Experiments are carried out under microgravity conditions here.
»  100 researchers work on cosmic global issues. Daily classes and practical seminars are attended by students of specialized educational institutions.
»  The non-profit foundation encourages the most talented bachelors and gifted masters.
»  The first stone was laid in the foundation of the future building in 1988. The Center was finally opened in a year.
»  The new building cost 24 million DEM.
»  The skyscraper looks like a concrete column with a sharp end.
»  There is a high 110-meter pipe inside. Every year, up to 400 ground tests related to gravity and microgravity experiments are conducted here.

Church of Our Lady, Bremen

Facts: » The small wooden church was built to propagate the Christian doctrine in the 8th century. It was replaced by a stone construction.
»  Over the centuries, it has been reconstructed and redecorated. It suffered from fires and was in disrepair. At one time, the building served as a warehouse. The cult construction gained its present appearance in the 19th century.
»  it was reconstructed at the expense of the rich merchant.
»  The 90-meter tower has a view of the surroundings.
»  The church has survived since the 11th century. One of such temples has been preserved since the construction. Over the years of its existence, the Church of Our Lady was not destroyed significantly.
»  Internal paintings were damaged by the fire caused by the bombing in 1944. The scorched outer medieval plaster was removed. Only brick walls were left. After the Second World War, the windows were replaced by stained glass in iron frames.
»  In the crypt, you can see medieval frescoes.
»  There was a flower market at the site of the old graveyard dismantled in the days of Napoleon.
»  Concerts are held at the weekends in summer.

CONTINUE - PART II »»
This guide to architectural sightseeing in Bremen is protected by the copyright law. You can re-publish this content with mandatory attribution: direct and active hyperlink to www.orangesmile.com.
Bremen - guide chapters 1 2 3 4 5 6 7 8 9 10 11 12 13 14 15 16

Build your walking routes in Bremen on the landmark map 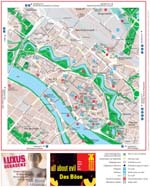 Architectural landmarks in the regions around Bremen

Hamburg
The new luxury building of the Hamburg Townhall was built in the 19th century on the site of an old burned-out building. Representatives of both legislative and executive authorities of Hamburg hold meetings there. The majestic town hall is decorated with huge statues of emperors on the front, and crowned with the baroque tower of 112 meters. The Hamburg Townhall has 647 rooms with luxurious interiors. The Kaiser Hall with rare leather ... Open »
Hannover
The New Town Hall was built at the beginning of the 20th century. With its elegant exterior, it looks like an ancient castle. It was constructed on the marshland, so the foundation of the building is supported by 6 000 beech piles. The opening ceremony was visited by the last Emperor Wilhelm II. Rooms, graceful staircases, and balconies are decorated with lots of sculptures and bas reliefs. In the main domed tower, there is an observation ... Open »
Magdeburg
The cathedral is named after Saints Catherine and Maurice. There used to be a basilica here. After the fire of 1209, the archbishop commissioned the construction of a new cathedral. Having travelled a lot, he was aware of the popularity of Gothic and was eager to create a Gothic church too. It is now considered one of the oldest buildings of such style. The construction lasted for over three hundred years and was completed in 1520. ... Open »
Dusseldorf
The construction of Tonhalle was finished in 1926. It should have housed a planetarium. In the 1970s, a concert hall was opened here, instead. The hemispherical roof of the building created a wonderful acoustic effect. In 2005, Tonhalle undergoes the design reconstruction. The dome space was equipped with metal concave slats with a LED illumination, creating the effect of the starry sky. The center of the dome is decorated with a chandelier ... Open »
Cologne
Cologne Cathedral is one of the world's most famous Roman Catholic cathedral built in the Gothic style. The cathedral reaching a height of 157 meters is ranked third in the list of the highest churches in the world and listed as a World Cultural Heritage. Construction of the temple was carried out in two stages, in 1248-1437 and in 1842-1880. The temple was rebuilt and restored several times. Near Cologne Cathedral there are ongoing ... Open »
OrangeSmile.com - online travel reservation expert providing reliable car rental and hotel booking services. We feature more than 25.000 destinations with 12.000 rental offices and 200.000 hotels worldwide.
Secure Server