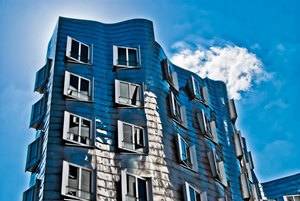 Let’s continue our virtual walk in Dusseldorf and its most prominent architecture monuments. This time, we will focus on such breath-taking sights as Tonhalle, Andreaskirche, Landtag Nordrhein-Westfalen, Stadttor, Marienkirche and many others. For many people, the cultural and historical vibe of these monuments defines the atmosphere of not only Dusseldorf, but also Germany in general. We will make a virtual 3D tour to every monument, look at it from a bird’s eye view, and browse the most interesting facts that have defined the history of Dusseldorf. The photo gallery and maps are the cherry on the cake! 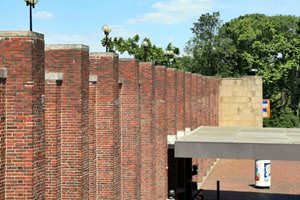 Facts:
» The construction of Tonhalle was finished in 1926. It should have housed a planetarium.
»  In the 1970s, a concert hall was opened here, instead. The hemispherical roof of the building created a wonderful acoustic effect.
»  In 2005, Tonhalle undergoes the design reconstruction. The dome space was equipped with metal concave slats with a LED illumination, creating the effect of the starry sky. The center of the dome is decorated with a chandelier made of mirrors created by the artist Adolf Luther.
»  The automatic LED system creates enchanting scenarios during artistic performances. The philharmonic Tonhalle has its own symphony orchestra involving 130 musicians. Every year, 450 concerts take place here.
»  The concert hall hosts well-known singers and musicians in various genres - from jazz to chanson. The foyer of Tonhalle hosts an exposition of glassware from the local master Helmut Hentrich. Tonhalle is one of the famous landmarks of the city. 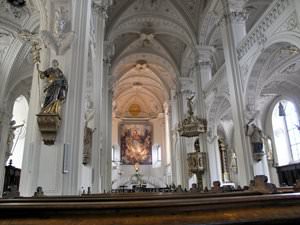 Facts:
» The Church of St. Andreas was built from 1622 to 1629 and belonged to the Jesuit order. Over time, the building of the Jesuit College was attached to it.
»  In 1717 they built a tomb of the Wittelsbach family. The sarcophagus of Johann Wilhelm is placed exactly here. A monument located in front of the Dusseldorf City Hall is also designated to him.
»  In 1773, after the dissolution of the Jesuit order, the church became a parish, and in 2005 it was transferred to the Dominican order. Since 1984, the church has been protected by the state.
»  The modest appearance of the temple is in contrast to the rich interior decoration: the sculptures of 12 apostles and saints and the altar with stairs of white marble.
»  The pipe organ, created in 1782, was repaired after the war in 1953 and 1971. Citizens like to come on Sundays to the concerts of organ music.
»  The temple hosts the relics of several dozen saints, including Saint Andrew, John the Baptist of the Prophet, the Apostles Peter and Paul, and others. 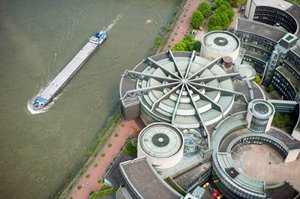 Facts:
» The Landtag of North Rhine-Westphalia is built in 1988. The architectural project of the parliament building has won a specially announced contest.
»  Its peculiarity is that it’s made in the form of a large circle, the middle of which is occupied by the hall for plenary sessions. In the adjacent round segments there are offices for 350 deputies. The building is made of stone, glass and copper.
»  If you climb to the observation deck of the Rhine Tower, you can clearly see the Landtag parliament, reminiscent of a complex clockwork.
»  When the construction of the Landtag was completed, the construction of the City Gate and the Rhine Tunnel has begun, landscaping the Rhine Embankment area.
»  For tourists there are free guided tours of the Landtag building. 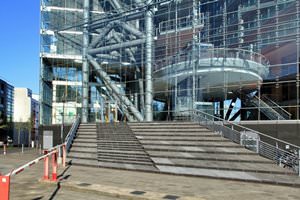 Facts:
» In the center of the city, a state-of-the-art high-tech building was erected, which visually resembles a huge gate, and was therefore named “Stadttor” (City Gate).
»  The Stadttor was built from 1992 to 1998. In the same year, Stadttor has received the award as the best object of the year at the international exhibition of real estate. It became the new symbol of Düsseldorf.
»  The height of the building is 75 meters. In its middle part, there is a hall 65 meters high.
»  The building has double glazing with a gap of 1.40 m. This technological measure carries out the natural ventilation of premises and maintains the temperature.
»  The building houses offices of various companies, the residence of the Prime Minister and the State Chancellery of North Rhine-Westphalia.

Facts: » Marienkirche (Church of the Immaculate Conception of the Virgin Mary) has a rich and majestic appearance and resembles a cathedral. In the city, it is called the "Cathedral of the Virgin". The Catholic church was built in 1894-1896. During the bombing of 1943, the church suffered badly.
»  Its restoration began in 1950 and lasted nineteen years under the guidance of architect Josef Lehmbrock. He did not have an academic education (he was a carpenter), but as a self-taught architect, he was the leading representative of modernism.
»  Neo-gothic stained-glass windows, that were located between the towers and vanished during the destruction, were replaced with concrete ones with triangular holes. These unusual windows belong to Günter Grote, professor of the art academy. The next restoration began in 1976. It was completed in 1982 by architect Wilhelm Damen, returning the original conditions to the temple.

This guide to architecture monuments in Dusseldorf is protected by the copyright law. You can re-publish this content with mandatory attribution: direct and active hyperlink to www.orangesmile.com.
Dusseldorf - guide chapters 1 2 3 4 5 6 7 8 9 10 11

Plan your own tour over Dusseldorf on the monuments map 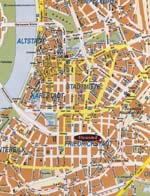 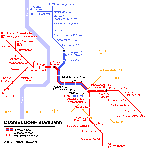 Search for architecture monuments of Dusseldorf on the map

Tours through neighbours of Dusseldorf

Cologne
Cologne Cathedral is one of the world's most famous Roman Catholic cathedral built in the Gothic style. The cathedral reaching a height of 157 meters is ranked third in the list of the highest churches in the world and listed as a World Cultural Heritage. Construction of the temple was carried out in two stages, in 1248-1437 and in 1842-1880. The temple was rebuilt and restored several times. Near Cologne Cathedral there are ongoing ... Open »
Liege
The city Catholic cathedral is named after St. Paul. It received the status of a cathedral in the 19th century. Local worshipers asked Napoleon for this. The treasury of the church was enriched with artifacts from other destroyed temples. The relics of Saint Lambert are kept here. The founder of the church is bishop Irakli. The building acquired its modern appearance in the 13th-15th century. There are also side belfries. In 1812, ... Open »
Brussels
The Brussels Town Hall is one of the most beautiful buildings in the city, which is the symbol of Brussels. The 5-meter statue of the Archangel Michael, the patron saint of Brussels, throwing devil is installed at the 96-meter Gothic Tower. The oldest part of the town hall was built in 1420, and the other part of the building was completed a little later (in 1450). Facade of the Hall is decorated with numerous statues of nobles, saints, and ... Open »
Rotterdam
The Euromast is a skyscraper in the form of the mast. The City Hall declared the competition of the construction of the extraordinary object. The Dutch architect won it. The Euromast was built in 1960 in conjunction with the tenth international Floriade exhibition. The Euromast is 9 m. The walls are about 30 cm thick. Its foundation is a solid block that weighs 1 900 tons. It makes such a thin construction more stable. There are ... Open »
Amsterdam
The Royal Palace is one of the three palaces in the Netherlands at the disposal of the monarch. The palace has been built to serve as a town hall in the Golden Age. Later, the building became the royal palace of King Louis Napoleon, and later it was converted into the Dutch royal palace. At present, the venue is used by the monarch for entertaining and formal events. New Year's court is annually held there. Numerous halls and galleries of the ... Open »
OrangeSmile.com - online travel reservation expert providing reliable car rental and hotel booking services. We feature more than 25.000 destinations with 12.000 rental offices and 200.000 hotels worldwide.
Secure Server