«« BEGINNING - PART I
Video of flights over top monuments of Amsterdam in HD format.
Use 'Full Screen' mode.
Let’s move further. The upcoming famous architecture monuments of Amsterdam that deserve to be mentioned are Royal Palace, Westerkerk, National Monument, State Museum, Church of St. Nicholas, South Church, and Beurs van Berlage. An overview of interesting facts and a collection of photographs are available for each monument. In order to plan a route for your real-life sightseeing tour in Amsterdam, use our interactive map of sights in of Amsterdam that is available below this article. 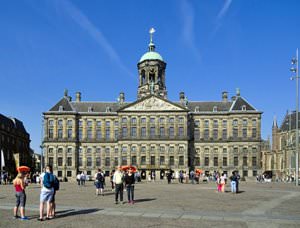 Facts:
» The Royal Palace is one of the three palaces in the Netherlands at the disposal of the monarch.
» The palace has been built to serve as a town hall in the Golden Age. Later, the building became the royal palace of King Louis Napoleon, and later it was converted into the Dutch royal palace.
» At present, the venue is used by the monarch for entertaining and formal events. New Year's court is annually held there.
» Numerous halls and galleries of the royal palace are adorned with paintings by Dutch artists, including Rembrandt, Govert Flinck, Jacob Jordaens, Jan Lievens and Ferdinand Bol.
» Rembrandt completed his largest canvas, The Conspiracy of Claudius Civilis, for the new Town Hall. 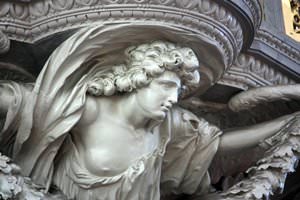 Facts:
» Westerkerk was one of the first purpose-built Protestant churches in Amsterdam.
» Today Westerkerk is the largest Calvinist church in the Netherlands.
» Approximately in 1669, the great Rembrandt was buried at the north wall of Westerkerk.
» The spire of the temple is the tallest church spire in Amsterdam; its height is 85 meters.
» Westerkerk is located very close to the Anne Frank House, where during World War II the Jewish girl Anne, her family and friends have being hid from Nazi persecution for two years. Westerkerk is often mentioned in her diary, as its clock tower is visible from the attic of the house, where the girl was hiding. Now, there is the statue of Anne Frank on the church square. 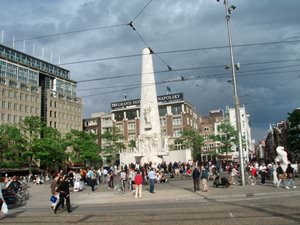 Facts:
» The National Monument is the memorial in Amsterdam commemorating victims of World War II.
» Annually on May 4 the memorial ceremony is held in memory of those killed during the WWII and the subsequent armed conflict.
» The central part of the monument is a 22-meter column-cone. Four chained male figures of the monument symbolize the suffering during the war.
» Two more figures, symbols of the clerisy (left) and working class (right) united into a single cohesive resistance are seen on both sides of the monument. A dog howling at their feet symbolizes the pain and dedication.
» Above the central bas-relief of the memorial there is a sculpture of a woman with a child and pigeons around them; that’s a symbol of victory, peace, and a new life. Doves are the symbol of liberation from the yoke of Nazism. 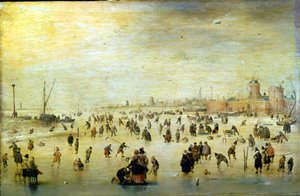 Facts:
» The State Museum is the Dutch national museum dedicated to the art and history. The museum is located on the Museum Square in Amsterdam near the Van Gogh Museum.
» In 2013, the State Museum became the most visited museum in the Netherlands, with a record number of 2.2 million visitors.
» The museum has a collection of art (paintings, sculptures and decorative arts, the art of Asia), a collection of historical items (archaeological artifacts, paintings, sculptures, clothing) and a collection of drawings, prints and photographs.
» In total, the museum displays about 8,000 works of art and history. The total number of exhibits is more than one million.
» The art collection is based on numerous works by Dutch masters of 15-19th centuries, in particular, the famous masters of the 17th century. The most notable are Rembrandt, Vermeer and Hals, as well as de Hooch, Steen, Ruisdael van der Gelst, van Scorel and others. 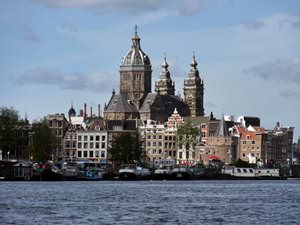 Facts:
» The Church of St. Nicholas is the largest Catholic church in Amsterdam.
» The special niche in the top of the gable houses the statue of the patron saint of the church and the city, St. Nicholas. St. Nicholas is also the patron saint of travelers, merchants and sailors.
» Recently the church has been completely renovated; inside the church there is a fully functioning organ dating back to the 19th century. Organ concerts are held there from time to time.
» The church is decorated with two majestic towers; between them there is rose-like window depicting Jesus and the four Evangelists.
» The church has cross-like shape with three outbuildings. 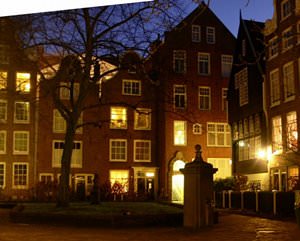 Facts:
» Construction of the South Church was completed in 1611. This temple was the first in Amsterdam, which was built specifically for the Protestants.
» History of the South Church is closely associated with life of Rembrandt, whose house was situated nearby. Three children of the artist were buried in this church.
» Rembrandt wrote the famous painting, Night Watch, in this church, as his workshop was too small for that.
» In summer for a small fee you can climb the 70-meter bell tower of the church offering spectacular panorama of the city.
» Currently, the church is a tourist landmark. After restoration of the temple, liturgy is no longer held there. The room of the shrine is now used for temporary exhibitions. 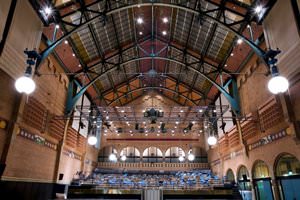 Facts:
» Beurs van Berlage is considered to be the most interesting architectural monument of the Netherlands dating back to the 19th century.
» Berlage Stock Exchange was built from 1898 to 1903. The building housed several different exchanges, including stock, grain, currency and freight.
» Beurs van Berlage is decorated with three statues: the statue of the legendary founder of Amsterdam, knight Gijsbrecht van Aemstel, the statue of Admiral and the conqueror of the 17th century, Jan Peterson Kuhn, and the statue of Hugo Grotius, who was the famous Dutch jurist and statesman.
» Currently the exchange building is open to the public as the museum that represents the history of Beurs van Berlage.

This guide to architecture monuments in Amsterdam is protected by the copyright law. You can re-publish this content with mandatory attribution: direct and active hyperlink to www.orangesmile.com.
Amsterdam - guide chapters 1 2 3 4 5 6 7 8 9 10 11 12 13 14 15 16 17

Plan your own tour over Amsterdam on the monuments map

Search for architecture monuments of Amsterdam on the map

Tours through neighbours of Amsterdam

The Hague
The quadrangle building is built of granite, light quarry sandstone, and red brick. There is a courtyard with a fountain bowl created in Copenhagen. There is also a garden designed like English landscapes. In the Peace Palace, legal proceedings and arbitration court hearings take place. This place is an indisputable institution of justice incorruptibility. Many countries contributed to the construction. When the First ... Open »
Rotterdam
The Euromast is a skyscraper in the form of the mast. The City Hall declared the competition of the construction of the extraordinary object. The Dutch architect won it. The Euromast was built in 1960 in conjunction with the tenth international Floriade exhibition. The Euromast is 9 m. The walls are about 30 cm thick. Its foundation is a solid block that weighs 1 900 tons. It makes such a thin construction more stable. There are ... Open »
Gent
There was a cloister at the site of the present House of God in the first half of the 10th century. You can see its wooden remains in the cave. Sint Baafskathedraal has not changed since the 14th century. The construction was completed in 1569. It seems that the building is cone, which is the feature of the Gothic style. The 3.5-meter altar is considered as a relic. It was created in the Middle Ages. When its shutters are opened, ... Open »
Brugge
The Church of Our Lady is a construction that features the combination of Gothic and Roman styles. The construction lasted over 2 years and was completed in the 13th century. In the spacious church with a 122-meter tower, the only sculpture of Michelangelo, “The Virgin Mary with the Baby”, is kept. Some windows of the church have the shape of a Reuleaux triangle. Such windows are quite rare. The church is famous for the fact that the ... Open »
Brussels
The Brussels Town Hall is one of the most beautiful buildings in the city, which is the symbol of Brussels. The 5-meter statue of the Archangel Michael, the patron saint of Brussels, throwing devil is installed at the 96-meter Gothic Tower. The oldest part of the town hall was built in 1420, and the other part of the building was completed a little later (in 1450). Facade of the Hall is decorated with numerous statues of nobles, saints, and ... Open »
OrangeSmile.com - online travel reservation expert providing reliable car rental and hotel booking services. We feature more than 25.000 destinations with 12.000 rental offices and 200.000 hotels worldwide.
Secure Server