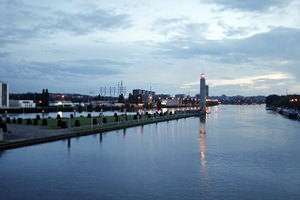 Let’s move further. The upcoming famous architecture monuments of Liege that deserve to be mentioned are Liege Cathedral, Royal Opera of Wallonia, St. Martin Church, Liege-Guillemins railway station, Eglise du Saint-Sacrement, and Abbey of Our Lady of Peace. An overview of interesting facts and a collection of photographs are available for each monument. In order to plan a route for your real-life sightseeing tour in Liege, use our interactive map of sights in of Liege that is available below this article. 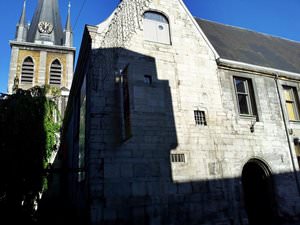 Facts:
» The city Catholic cathedral is named after St. Paul. It received the status of a cathedral in the 19th century. Local worshipers asked Napoleon for this.
»  The treasury of the church was enriched with artifacts from other destroyed temples. The relics of Saint Lambert are kept here.
»  The founder of the church is bishop Irakli.
»  The building acquired its modern appearance in the 13th-15th century. There are also side belfries. In 1812, the bell tower with a thin sharp spire and high narrow windows was constructed upon the order of Emperor Bonaparte.
»  The cathedral included a monastery. Seven rooms house rare pieces of religious art: books, paintings, sculptures, clergymen’s clothes, ivory statuettes, and handwritten texts.
»  There are stained glass windows made in the 16th century.
»  The exterior of Liege Cathedral has changed many times for several centuries.
»  Today, the cathedral is the residence of the Bishop of Liege. 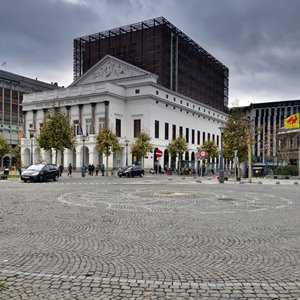 Facts:
» One of the largest opera theatres in the country is the Royal Opera of Wallonia.
»  It started to be constructed in 1818. Main materials were the fragments of churches destroyed during the Revolution in 1789. The first stone was laid into the foundation by a famous actress Mademoiselle Mars. Two years later, the cultural institution was opened.
»  At the main entrance, there is a monument dedicated to a famous musician and a native Andre Gretry. The legend says that the heart of the great classic of the French comic opera is buried.
»  In 1854, the construction was renovated: rooms were extended, the number of spectators’ seats was increased, electric lighting appeared, the interior of halls and balconies changed.
»  The opera theatre was closed during the First World War. German raiders used the building as a stable. After the war (1919), performances were resumed in the Royal Opera.
»  The creative team of the Royal Opera of Wallonia works at the theatre.
»  The audience hall accommodates 1041 seats.
»  Drama plays, music performances, and contemporary concerts are staged here. 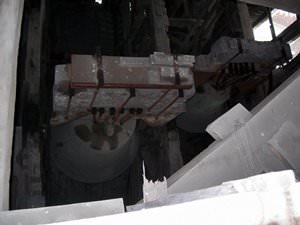 Facts:
» The church is named after St. Martin, a clergyman who manifested faith in Christ.
»  For several millennia, the sacrament of communion is performed here. Bread and wine represent the Body and Blood of the Holy Spirit.
»  In the Middle Ages, there was a confrontation between craftsmen and noblemen. The nobles did not want to acknowledge quality between them and ordinary people. In 1312, insurgent artisans burned the church and the nobles hiding there. Several hundred people died at that time.
»  The Basilique Saint-Martin was being built at the site of the destroyed construction from 1506 to 1542. The Cross and the statue of the Mother of God have survived since that time.
»  There is a quadrangular tower near the brick Gothic basilica. Stones were produced in local mines.
»  In the religious building, there are the remains of many eminent people. In the sarcophagus of black marble, there are the relics of the abbot of the church who died in 1602. The sculptor who made medallions for the walls was buried here too.
»  On one of the columns at the entrance, you can see the picture of a church maze. It symbolizes the tortuosity of people’s life paths. 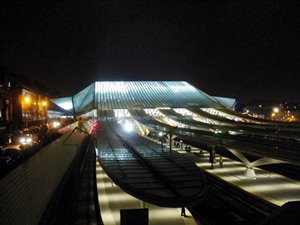 Facts:
» There are a few public buildings that would stagger the imagination. The Liege-Guillemins Railway Station is one of them.
»  The building acquired its modern appearance in 2009. The construction is the combination of glass, steel, and concrete.
»  The first building appeared here in 1842. As the infrastructure developed, it was necessary to expand the space. The city administration announced a creative contest for the new design of the railway station. It was won by a Spanish architect. It has been 13 years since the creation of the project.
»  A curved arched vault is very impressive. The wavy 35-meter roof seems to follows the contour of the mountains surrounding the settlement. There are 39 steel pillars along 9 railways. A glass dome is bulletproof. If it is broken, its pieces will remain on the film stretching over pillars.
»  32 000 m2 of glass were used for the roof.
»  Windows are cleaned by special robots gliding on the surface.
»  The building has no foundation and no walls.
»  The railway station cost €437000000.
»  Every day, 36 000 people depart from the station.

Facts: » The Protestant Eglise du Saint-Sacrement, or the Church of the Blessed Sacrament, is the exemplar of one architectural style named Classicism and developed in the middle of the 18th century.
»  The building is built by the project of a famous architect Jaques Renault who followed the strict canons of the construction of that time.
»  The facade is quite modest. Outer walls are decorated with several statues. Above the entrance, there is a round window without stained glass. The interior of the building contrasts with an exterior.
»  In the territory of the abbey, there is a prayer house constructed by the Order of Saint Benedict. At that time, this community had powerful representation in the city.
»  The prayer house is named after the Blessed Sacrament. This name refers to bread and wine. They are cooked by a clergyman and symbolize the Christian sanctuary. They are used during the Communion. The phrase “the body and blood of Christ” means “to embrace the faith of the Son of God”. Such a worship meal helps come near to God.
»  Clergymen of the Eglise du Saint-Sacrement have a right to carry out this religious rite.

Abbey of Our Lady of Peace, Liege

Facts: » In 1627, three nuns started living in an abandoned farmhouse. Here, they welcomed people who needed for health care but could not pay for treatment. Villagers help nuns with this noble cause.
»  A building was built a few years later. It has survived to this day.
»  The project was provided by the first-ever architectress. Nun Antoinette Desmoulins developed the plan for the construction of a church. It was being built from 1686 to 1690.
»  Its facade is very interesting. Columns combine several architectural styles. Some of them are stocky or massive, others are decorated with patterns. When the nun died suddenly, a bypass gallery was constructed along the perimeter of the building.
»  The abbey was gradually extended. Later, a girls’ school was opened in the monastery. Here, girls studied theology, cookery, medicine, history, and exact sciences. The Benedictine Abbey of Our Lady of Peace was fame as a place where people learned to live without harming others but loving them as themselves.
»  Nowadays, this school is a Jesuit boarding elementary and secondary educational institution.

This guide to architecture monuments in Liege is protected by the copyright law. You can re-publish this content with mandatory attribution: direct and active hyperlink to www.orangesmile.com.
Liege - guide chapters 1 2 3 4 5 6 7 8 9 10 11

Plan your own tour over Liege on the monuments map

Search for architecture monuments of Liege on the map

Tours through neighbours of Liege

Brussels
The Brussels Town Hall is one of the most beautiful buildings in the city, which is the symbol of Brussels. The 5-meter statue of the Archangel Michael, the patron saint of Brussels, throwing devil is installed at the 96-meter Gothic Tower. The oldest part of the town hall was built in 1420, and the other part of the building was completed a little later (in 1450). Facade of the Hall is decorated with numerous statues of nobles, saints, and ... Open »
Cologne
Cologne Cathedral is one of the world's most famous Roman Catholic cathedral built in the Gothic style. The cathedral reaching a height of 157 meters is ranked third in the list of the highest churches in the world and listed as a World Cultural Heritage. Construction of the temple was carried out in two stages, in 1248-1437 and in 1842-1880. The temple was rebuilt and restored several times. Near Cologne Cathedral there are ongoing ... Open »
Dusseldorf
The construction of Tonhalle was finished in 1926. It should have housed a planetarium. In the 1970s, a concert hall was opened here, instead. The hemispherical roof of the building created a wonderful acoustic effect. In 2005, Tonhalle undergoes the design reconstruction. The dome space was equipped with metal concave slats with a LED illumination, creating the effect of the starry sky. The center of the dome is decorated with a chandelier ... Open »
Luxembourg
The cathedral was named after the Mother of God in 1848. In 1613-1621, the building located in the southern district belonged to the Jesuits. In 150 years, when members of the Order were exiled outside the country, the church was given the icon of the city patroness. The house of God was named Notre-Dame Cathedral after her. It had been constructed for 8 years since the beginning of the 17th century. The updated interior is designed in ... Open »
Gent
There was a cloister at the site of the present House of God in the first half of the 10th century. You can see its wooden remains in the cave. Sint Baafskathedraal has not changed since the 14th century. The construction was completed in 1569. It seems that the building is cone, which is the feature of the Gothic style. The 3.5-meter altar is considered as a relic. It was created in the Middle Ages. When its shutters are opened, ... Open »
OrangeSmile.com - online travel reservation expert providing reliable car rental and hotel booking services. We feature more than 25.000 destinations with 12.000 rental offices and 200.000 hotels worldwide.
Secure Server