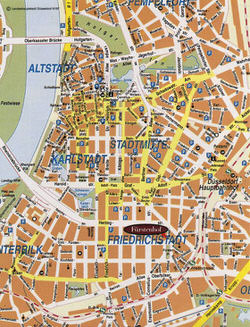 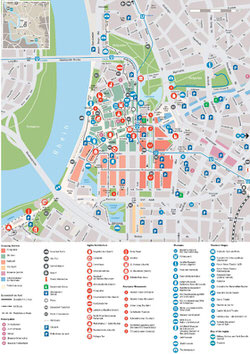 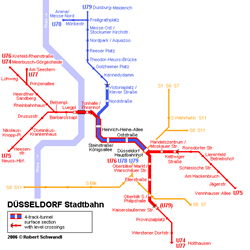 Interactive maps of hiking and biking routes around Dusseldorf

1. You can zoom in/out using your mouse wheel, as well as move the map of Dusseldorf with your mouse.
2. This interactive map presents two modes: 'Biking Routes' and 'Hiking Routes'. Use the '+' button on the map to switch between them.

This Dusseldorf map has two modes: 'Railway Network' and 'Landscape & Rural Map'. Use the '+' button on the map to navigate.

Our guide to Dusseldorf

In case an idea of watching the newest films sounds appealing, consider visiting two of the best cinemas in Dusseldorf. These are UCI Kinowelt and Ufa Palast. Kommödchen is the place where visitors have fun and laugh at excellent jokes. This bar specializes in performances of stand-up performers who are always ready to share their funny and interesting stories with the public. Connoisseurs of theatrical art and … Open

Do you plan to visit Dusseldorf with kids or are you in search of romantic adventures? In both cases, the gorgeous park of Südpark is the right destination. As it is not hard to guess by the name, this charming park is located at the southern part of the city. It is a wonderful location for a family day out, but not many tourists know about it. The park is adjacent to an elite golf club, but this is not the main … Open

A visit to Dusseldorf at the beginning of June is a great opportunity to visit the Craft Beer Festival. This amazing event traditionally takes place in Mitsubishi Electric Halle. Besides that, this is the best time to enjoy delicious craft beer. There are also many appetizers and popular beer snacks. Moreover, the festival’s visitors enjoy not only excellent beer and delicious food but also an interesting … Open

One of the most popular shopping centers in Düsseldorf - Carsch-Haus - is located in a chic historical building. Dozens of shops of men's and women's clothing, footwear, cosmetics and perfumery are opened in the five-story shopping center, as well as sports goods shops. Most stores operating here belongs to an average price category. During periods of sale, quality items can be bought at considerable discounts. … Open

There is also a wonderful botanical garden in the city, which nature lovers will be able to visit at any time of the year. It is located in a large domed pavilion with unusual glass walls and a roof. In this pavilion is hidden a diverse and very interesting collection of exotic plants. Here one can see rare tropical flowers, and cacti, which in natural conditions are found only in the arid desert. In the warm … Open