Sightseeing in Metz - what to see. Complete travel guide 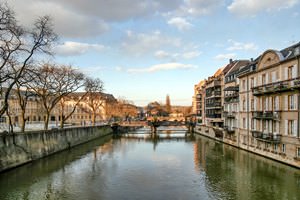 Metz is an ancient town situated in the eastern part of the country. The city has a rich history that started over three thousand years ago. Modern Mets is a major industrial center, which attracts visitors by elegant nature landscapes and a relaxed atmosphere that is favorable for undisturbed rest.
Shopping in Metz - main shopping streets, outlets and boutiques
For many shopping enthusiasts, the starting point for walks in Metz is Saint-Louis Square. The main square is surrounded by the most popular souvenir shops and restaurants. Back in the …

Open
St. Etienne Cathedral built in the gothic style is one of the main attractions of Metz. This is also one of the largest religious buildings in France. Near the central square of the town is located the Museum of Art and History, which halls exhibit numerous items that tell about most significant moments in the history of Mets.
The city is located in close proximity to the Moselle River. If you cross the river, you will get to the picturesque Saulx Island. The majority of houses on the island were built in the 18th century. Copyright www.orangesmile.com
Family holidays with kids in Metz. How to entertain your child, things to show to children.
The capital of Lorraine is a wonderful place that will be appreciated by all family members. Besides exploring numerous attractions (historical, cultural, architectural ones), the city …

Open
On daytime the city is ideal for walks and sightseeing; at night it is almost unrecognizable as Metz turns into a mysterious and unknown place. The reason for this is in the fact that all houses in the town are faced with a kind of iridescent stone that has a rainbow color in the light of lanterns. Boutiques and malls on central streets stay open until late in the evening. You will also find here French restaurants and bars. One of the traditional dishes that you will be offered in any restaurant of the town is the dessert made of mirabella. This fruit was bred by local selectionists from ordinary plums, and you will never find this fruit anywhere else. 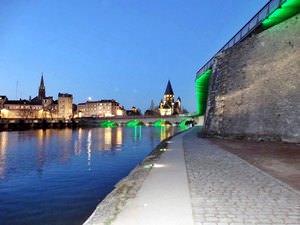 If you come to this resort in summer, you will be able to enjoy the splendor of local parks that become the location of numerous concerts on evenings. Each park is decorated with beautiful dancing fountains that calm down and magnetize people, making them watch fountains for hours.
Cuisine of Metz for gourmet with top restaurants and cafe
The most amazing gastronomic symbol of Metz is Mirabelle plum, which was cultivated in the region in the 15th century. Fruits of this plum are small in size and have a yellow or red color. …

Open
In the city, there is an outstanding Pompidou-Metz Exhibition Center, which will interest all admirers of modern culture. Its building is one of the most beautiful modern buildings of the city. The construction of the center was completed in 2010. Within the walls of the spectacular building, is located the largest exhibition grounds in France. Exhibitions of modern European artists, sculptors and photographers are regularly held here. Thanks to the original form of the roof, the Pompidou-Metz Exhibition Center is one of the most recognizable city attractions. 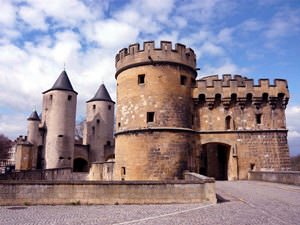 On the Comedy Square is located the oldest opera house in France, whose building was built in 1753. Like many years ago, today the most popular opera productions are held within its walls. For the years of its existence, the theater managed to preserve its unique historical interior.
Authentic traditions, festivals and lifestyle of Metz inhabitants
The most significant event in the cultural life of the city is the annual Mirabelle Plum Festival. For the first time, locals began to celebrate the plum harvest more than a hundred years …

Open
The building of the railway station in Metz is also an important historical attraction. It was built in the 19th century by the order of Emperor Wilhelm II. At the time of construction, this railway station was one of the largest and most technically equipped in the country. During the war years, it played an important strategic role. Every day at this station, the trains were maintained by 25,000 soldiers and used to transport cavalry. 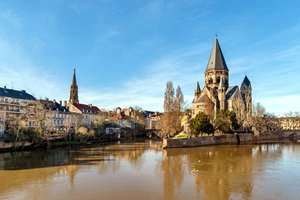 One of the most unusual symbols of the city is the Bridge of the Dead, which owes its appearance and gloomy name to the local archbishop. In the Middle Ages, by order of the Archbishop, a number of amazing decrees were issued, all of which were executed without question. According to one of these decrees, after the death of every citizen, his richest robe was to become the property of the bishop. Expensive clothes were sold, and all money received from the sale was invested in the construction of the bridge.
Excursion over cultural sights of Metz - 'must visit' points of interest
Metz is famous for its amazing historical monuments, many of which are now of state significance. The most famous is the Cathédrale Saint-Étienne, one of the most beautiful and largest …

Open
For many years, the Metz has been unofficially called the Garden City. Beautiful orchards and parks occupy a significant part of its territory. Travelers, who visit the city in summer, will have the opportunity to stroll through these marvelous gardens and try fragrant raspberries, which are the largest in the world. For those who like long walks, there is an interesting 34 kilometer long hiking trail in Metz. It covers all the most significant and picturesque places of the city. Part of the footpath passes along the river bank.

This guide to iconic landmarks and sights of Metz is protected by the copyright law. You can re-publish this content with mandatory attribution: direct and active hyperlink to www.orangesmile.com.
Metz - guide chapters 1 2 3 4 5 6 7 8

Survived castles around Metz
♥   Castle 'Château de Woippy' Moselle, 2.6 km from the center. On the map

National and city parks around Metz
♥   Regional Nature Park 'Lorraine' , 32.4 km from the center. On the map

Art galleries in Metz and around
♥   Art museum 'Centre Pompidou-Metz; The Golden Courtyard Museums' Metz, 3 km from the center. On the map

Sights around Metz from our guide 'Extreme places on Earth' 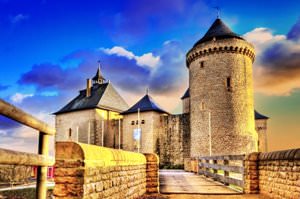 Distance from Metz center - 40.8 km.
Exhibitions are held here. They are dedicated to contemporary art. One of the most unusual events awaits visitors on the first Sunday of the month. One of the halls of the fortress was converted into a cinema. Film screenings are held in it every month. Fans of theatrical art will be interested in visiting Malbrouck Castle in mid-August. It becomes a venue for a traditional theater festival at this time of year. A very interesting collection of historical exhibits is kept in the castle permanently. Its visitors can see ancient weapons, beautiful antique furniture, and works of art from different eras, as well as collections of old black-and-white photographs. A walk through the vast grounds of the castle will also be interesting. … Read further

Search touristic sites on the map of Metz

Sightseeing in regions nearby Metz

Dudelange
There are two interesting zoos in the outskirts of the town. The first one is named Parc Merveilleux, and it is a wonderful place to look at exotic animals, such as kangaroos, porcupines, monkeys, crocodiles, chameleons, and parrots. Don’t forget to check an aquarium with interesting fish. There are also several interesting sculptures depicting different animals. The second ... Open »
Nancy
Originally the town was founded as a duke fortress and was called Nansiakum. Today this is a popular French resort, a picturesque town and the best place of rest for tourists who enjoy exciting excursions. The National Museum of Fine Arts is one of the oldest cultural centers of Nancy. It was founded in 1793. Currently the museum undergoes a major reconstruction. The main ... Open »
Luxembourg
Besides this, the city is rich in various places of interest despite its small size. The Bock casemates are considered the most famous tourist attraction , reminiscent of the strategic importance of the city in the past. In Luxembourg, one will easily find a number of museums dedicated to the history of the city. The Museum of History of Luxembourg is one of them. The local ... Open »
Saarbrucken
Saarbruecken is a major scientific and university center that is also rich in cultural and historical monuments. For tourists this is primarily a sightseeing resort, which attracts visitors by its modern infrastructure and excellent service. Start exploring the city from visiting St. Yohanner Markt square. Here you will find most popular cafes and restaurants; every morning ... Open »
Trier
Porta Nigra. Sightseeing in Trier usually starts with a visit to the main place of interest - Porta Nigra , which can be translated from Latin as “the black gate”. Porta Nigra is the northern gate of the city. It was built around 180 AD. At that time the gate was a part of the Roman city wall. The length of the wall estimated 6.5 km, its width was 3 m, and its height ... Open »
Echternach
Despite a small size, Echternach has a substantial number of architectural landmarks that were built in different epochs. The Benedictine Abbey not far from the basilica is one of them. This is a gorgeous building in the Lotharingian style that dates back to the beginning of the 18th century. The building’s shape is nearly square if one looks at it from above. There is a ... Open »

All about Metz, France - sightseeings, attractions, touristic spots, architecture, history, culture and cuisine. Prepare your trip together with OrangeSmile.com - find out the 'must see' things in Metz, which places to visit, which excursions to take, where the breathtaking views are waiting for you. Planning your trip with this travel guide will help your to get the most out of Metz in few days.