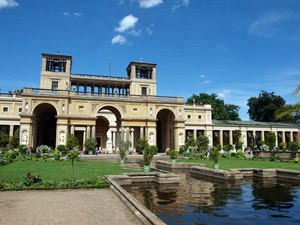 View Potsdam from the Rotunda of the Marmorpalais Palace

There is Lake Heiliger in the north of Potsdam. The picturesque New Garden is located next to it. The Marmorpalais Palace was built on its territory in 1792. It resembles a cube in shape. The palace belongs to the style of early classicism. It was built of red brick and light-colored marble. At first, it was used as a Royal residence. Then the palace served as a club of Soviet officers. The museum is located there today.
Advices to travellers: what you should know while being in Potsdam
1. Potsdam is connected with Berlin by the transport net of S-Bahn trains, which depart from Potsdam-Sanssouci and Potsdam-Charlottenhof every 10 minutes. Travelers who think that it is not …

Open
Marmorpalais is open all year round. You can visit it from 10 am to 6 pm from Tuesday to Sunday from May to October, until 4 pm on weekends from November to March, and until 6 pm on Saturdays and Sundays in April. You can reach it by bus number 603. You will be able to see numerous exhibits and enjoy the beautiful views of the surrounding area from the rotunda tower. It is located on the roof of the palace.

Climb One of the Observation Towers of the Belvedere Castle

The Pfingstberg hill is located in the city. Its height is 76 meters. Belvedere Castle was built on its top by order of King Frederick William IV in the middle of the XIX century. Observation platforms are equipped on the tops of the towers. You will have the opportunity to come here and climb the spiral staircase to one of them to enjoy the picturesque landscape of Potsdam from a height. Copyright www.orangesmile.com
Guide to Potsdam sightseeing - things to see and to visit
This city is located near Berlin in a very picturesque place. A large park complex includes a system of lakes, the largest of which is Wannsee. Among the parks and gardens you can see many …

Park Babelsberg is located near the lake. There are ponds, waterfalls, and Schloss Babelsberg Palace there. It is designed in a neo-Gothic style. There is also the Courthouse pavilion, the Sailor's house, and the Flatowturm Tower in the park. It is the tallest building in the park. Its height is 46 meters. The tower was built in 1856. It represents a copy of the Eschenheimer Turm gate. It was built in Frankfurt in the XV century. You can get inside the building. The museum works there. You can also climb to the observation deck. Potsdam is visible from there. 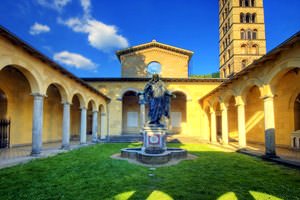 Try on the Role of a Stuntman

Babelsberg Film Studio was founded in the suburbs of Potsdam in 1910. The film park was opened next to it in 1991. It has the same name. It is open from 10 am to 6 pm from April to November. If you decide to visit it, you will get the opportunity to have fun and join the cinema art. You can visit several parts of the park. For example, you can visit the Wild West, the land of horrors, a city from the Middle Ages. You will also have the opportunity to visit a 3D hall with moving chairs, take advantage of an attraction that simulates a submarine flood, and ride a small train. You can also try on the role of a TV program participant, weather forecast host, stand-in, or stuntman.
Cuisine of Potsdam for gourmet with top restaurants and cafe
Local restaurants and bars will be appreciated by lovers of German beer, meat dishes and classic national dishes. At any moment the city’s guests can diversify their rest and go to one …

Observation Deck of the Norman Tower

The man-made reservoir was created on the territory of the complex of Sanssouci in 1745. The Norman Tower was built next to it in 1846. The building is 23 meters high. There is a viewing platform in the tower. It is open to the public from 10 am to 6 pm on weekends and public holidays from the first days of May to the end of October. You can climb it and see the panorama of the city and the landscape of Sanssouci Park. 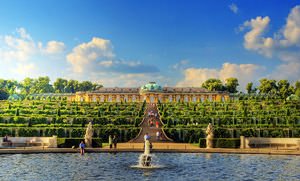 The AbenteuerPark Adventure Park is located near Potsdam in a beech forest. There are archery targets and 12 obstacle courses in it. They are located between tree trunks at a height of 1 to 12 meters. There are also 170 climbing elements and a zipline in the park. The length of the zipline is 200 meters. If you visit the park, you can rent equipment. It consists of a helmet, a carbine, and a harness. Then you can choose one of the rope routes with a total length of 1.7 kilometers. Its complexity will match the level of your physical fitness. The briefing will be held before the start of its passage. You can stay in AbenteuerPark for a limited time or until closing time.

This article about ideas on extraordinary weekend in Potsdam is protected by the copyright law. You can re-publish this content with mandatory attribution: direct and active hyperlink to www.orangesmile.com.
Potsdam - guide chapters 1 2 3 4 5 6

♥   Restaurant 'Jungbluth' Berlin-Steglitz. Type - Modern cuisine|Country. 19 km from the center. On the map

♥   Restaurant 'kochZIMMER' Beelitz. Type - Modern cuisine. 19.2 km from the center. On the map

♥   Restaurant 'Balthazar' Berlin. Type - International. 20.2 km from the center. On the map

♥   Restaurant 'Brasserie Lamazère' Berlin. Type - French. 20.3 km from the center. On the map

Survived castles around Potsdam
♥   Castle 'Schloss Charlottenhof' , 2.1 km from the center. On the map

Art galleries in Potsdam and around
♥   Art museum 'Brücke Museum' Berlin, 16.6 km from the center. On the map

♥   Art museum 'Museum Berggruen' Berlin, 21 km from the center. On the map

♥   Art museum 'Scharf-Gerstenberg Collection' Berlin, 21 km from the center. On the map

Public palaces near Potsdam
♥   Palace 'Marmorpalais' Potsdam, 1.7 km from the center. On the map

♥   Palace 'Belvedere on the Pfingstberg' Potsdam, 2.1 km from the center. On the map

♥   Palace 'Charlottenhof Palace' Potsdam, 2.1 km from the center. On the map

♥   Palace 'Cecilienhof Palace' Potsdam, 2.4 km from the center. On the map

Berlin
Are you keen on modern art? If yes, a special and important mission awaits you in Berlin. Don’t forget to attend Kunsthaus Tacheles - an absolutely fascinating place, where young Berlin artists, sculptors, musicians and actors have worked and lived for decades. The House of Art looks nothing like classic museums. It is located in several abandoned historical buildings that ... Open »
Dresden
When it’s time to buy souvenirs, head to Ratags, which is located in building 6 on Kunsthandwerk an der Kreuzkirche. This shop sells amazing wooden handmade souvenirs. Beautiful Christmas ornaments and toys, as well as thematic souvenirs with symbols of Dresden, can be purchased all year round at Ratags. When you’re hungry, don’t go to one of the nearby cafes and head ... Open »
Hamburg
When it's time to diversify your vacation program with a truly unusual event, go to "Dialogue in the Dark" (Dialog im Dunkeln). In this unique interactive center, visitors are invited to fully experience how it feels to be blind. You will walk through dark rooms accompanied by blind people who will help you reveal all the secrets of tactile sensations and feel in complete ... Open »
Prague
There are some mystic and hidden districts in Prague, and not many travelers know about their existence. For example, Rotunda svatého Kříže, which is located not far from the Charles Bridge, is not mentioned in the majority of tour guides, and travelers won’t see it during most excursions. There are many legends connected with the old church. According to one of them, ... Open »
Nurnberg
Those who prefer more traditional locations will be like walking through the central city streets. Here, each house can safely be called a unique attraction. If you look at facades, on each of them you can notice unusual carved balconies, old signs, skillful painting, and other decorations - each historic house keeps its secrets. Nuremberg's most popular attractions are ... Open »
Dortmund
Having explored former industrial districts, it is high time to pay your attention to popular shops and shopping centers in Dortmund. On Lutge-Bruck-Strasse Street, tourists will find the unique Bullet shop that is primarily targeted at men. At a glance, the shop doesn’t look interesting as it sells camo outfits and pyrotechnics. However, if you walk deeper into the store, ... Open »

Walk through hidden local streets, sneak to a small cafe, breathe and enjoy Potsdam from inside. Stay out from the beaten track during your city weekend, discover the soul of Potsdam as a real travel gourment. Follow our guide, take one of the exclusive services and spend your time in Potsdam unforgettably and with a full passion!