Detailed hi-res maps of Potsdam for download or print 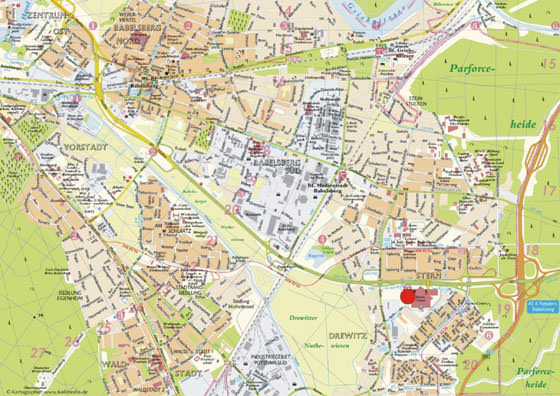 The actual dimensions of the Potsdam map are 1510 X 1067 pixels, file size (in bytes) - 342548. You can open this downloadable and printable map of Potsdam by clicking on the map itself or via this link: Open the map. 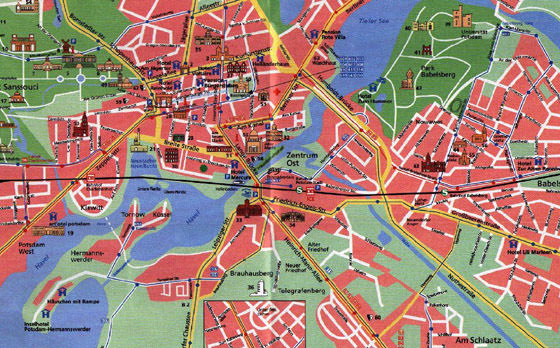 The actual dimensions of the Potsdam map are 1170 X 727 pixels, file size (in bytes) - 338326. You can open, download and print this detailed map of Potsdam by clicking on the map itself or via this link: Open the map. 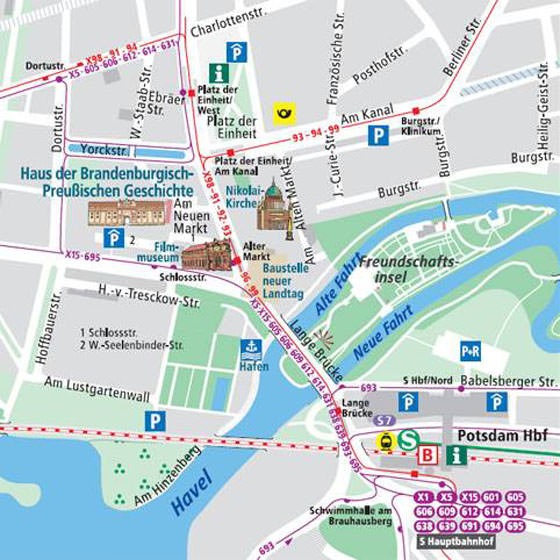 The actual dimensions of the Potsdam map are 482 X 482 pixels, file size (in bytes) - 50736. You can open this downloadable and printable map of Potsdam by clicking on the map itself or via this link: Open the map.
Potsdam - guide chapters 1 2 3 4 5 6 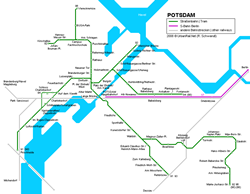 Search for services, infrastructure and sights on map of Potsdam

Our guide chapters over Potsdam

Local restaurants and bars will be appreciated by lovers of German beer, meat dishes and classic national dishes. At any moment the city’s guests can diversify their rest and go to one of the exotic restaurants, there are a number of them in the city. The restaurant Gasthausbrauerei invites clients to enjoy favorite beer and fried sausages. It is located on the territory of famous brewery, that’s why … Open

Potsdam has been kept the main residence of Prussian kings for long years, a great number of exciting palaces, centuries-old parks and gardens have been kept in the city. A lot of sights of the city are epoch-making objects, the city’s guests have big and variable program. The city’s symbol is fantastic palace complex Sans-Souci, whose name means “careless”. Architectural ensemble involves several … Open

At the Market Square is located a gorgeous building of the old town hall. Nowadays, it houses the Museum of Potsdam, famous for its extensive and diverse collection. The collection of antique ceramic items made in the 18th - 19th centuries is considered one of the most valuable. Visitors of the museum have an opportunity to see the most beautiful antique furniture, old musical instruments, samples of the old military … Open

This city is located near Berlin in a very picturesque place. A large park complex includes a system of lakes, the largest of which is Wannsee. Among the parks and gardens you can see many beautiful palaces and pavilions that emphasize elegant architecture of the city and its noble features. The so-called Old Town is the most notable area for tourists as here you will see buildings of 18 - 19 centuries, as well as … Open