Detailed hi-res maps of Mannheim for download or print 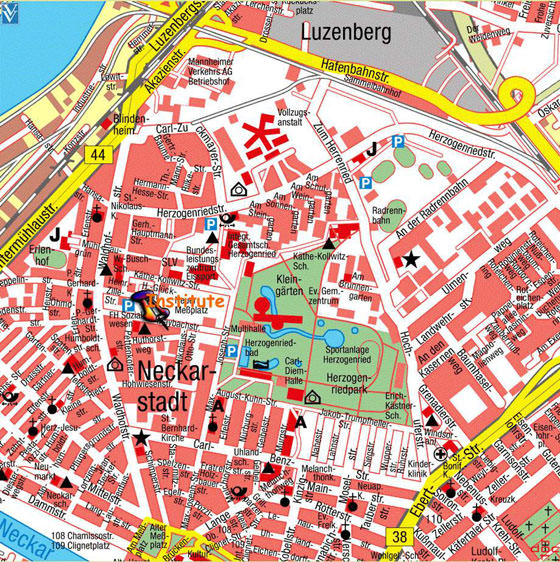 Search for services, infrastructure and sights on map of Mannheim

Our guide chapters over Mannheim

The ancient water tower is an original symbol of the city. It was built in 1889 and up to the year 2000, was used for its intended purpose. The height of this tower is 60 meters, and its diameter at the base is about 19 meters. Presently, the tower is surrounded by a picturesque modern park, where cozy places with benches for rest, are built. On the local square, interesting cultural events are often conducted. … Open

Mannheim for children - what to visit

There are several excellent museums in Mannheim, some of which will be interesting to visit with children. One of the most extraordinary museums is Technoseum Mannheim. The exposition of this technology museum tells visitors about the greatest technical achievements of the last 200 years. Many of the exhibits in this museum can be touched; a fact that is sure to please children. During the tour, visitors will be … Open

You can look into Alfa bookstore for unusual memorable gifts. Despite the fact that it sells books exclusively in German, the store is still very popular with tourists. They come here to buy chic albums with views of Germany, and many visitors of the stores are attracted by a large selection of cards in a romantic style and other souvenirs. The cost of the postcards is very attractive here and it is about 1 Euro. … Open

2. The utility supplied voltage is 220V. All the hotels and inns are equipped with European standard sockets. During preparation for the journey one should check all the appliances taken in the tour for compatibility as well as buy necessary adapters and connectors. 3. Prudent tourists will love local supermarket stores Karstadt, Kaufhol and Hertie. There the tourists will find fresh foods as well … Open

Those who prefer indoor entertainment can spend time in the entertainment club Merkur, where you can try such activities as bowling, pinball, billiards and darts. You can also find a cosy cafe in the centre, where you should definitely go after the game to tell your friends about the impressions you’ve got. Those who like to listen to live music performances and at the same time drink a strong (or not) drink, … Open

Traditions and mentality of Mannheim

The thriftiness of local residents is also often the subject of controversy and jokes of residents of the surrounding areas. Historically, Mannheim was formed in a fairly poor agricultural area. For hundreds of years, locals worked for the benefit of a rich harvest, and then put a lot of effort to save the grown vegetables. Despite the fact that the hard times for the city were far behind, thrift has remained a … Open